Energy Brainpool shows long-term trends in Europe with its “EU Energy Outlook 2050”. The European energy system will change dramatically in the upcoming decades. Climate change and an aging powerhouse are forcing the European Union and other countries to readjust their energy policies. What do these developments mean for electricity prices and revenue potential for photovoltaics and wind?

The electricity markets in Europe are subjected to constant change, which makes up-to-date price scenarios imperative. This is the only way to correctly assess market developments, assets and contracts, investment decisions or business models. The “EU Energy Outlook 2050” displays the development of the “standard scenario” of Energy Brainpool for EU 28, Norway and Switzerland. The actual processes in the individual countries can vary considerably. In order to be able to make informed decisions, detailed modelling of the individual national markets and their influencing factors including sensitivity analyses are indispensable.

What does the power plant fleet of the future look like? 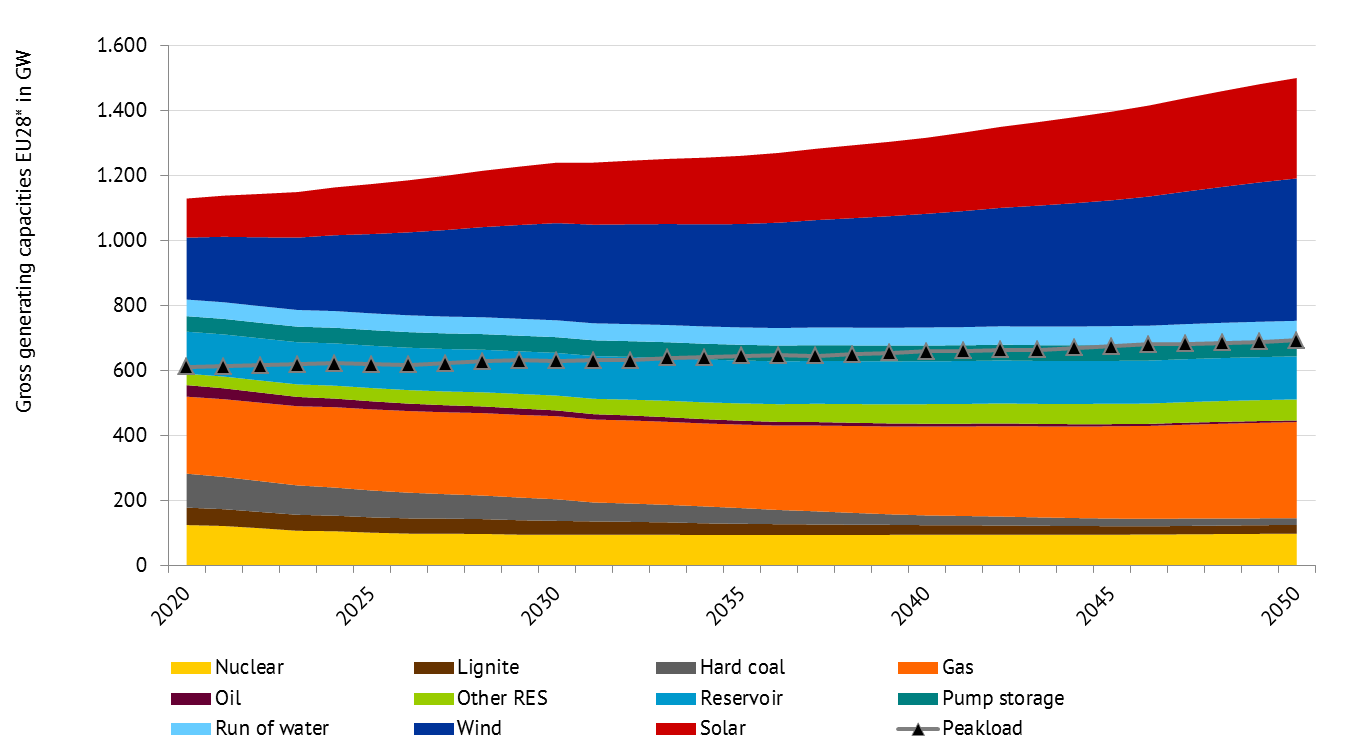 The power plant fleet in Europe has developed over several decades. The power plants currently on the market have already reached a high age. They will have to be replaced by 2050, including all nuclear power plants (except those under construction). In order to limit climate change replacing technologies have to be low in emissions – a renaissance of coal is therefore excluded. Well-known and proven technologies are available for the future: gas-fired power plants, renewable energies and nuclear power plants. Above all, wind power and photovoltaics continue to offer great growth potential. These technologies are now competitive – thanks to the sharp drop in costs over the last decade. Experts predict that this development will continue. In the “EU Energy Outlook 2050”, the share of these variable renewable energy sources (vRES) will rise to almost 50 percent of total supply by 2050.

In particular, gas-fired power plants will be added as controllable, fossil generating capacities at the European level in the future. This is due to the lower emissions compared to coal-fired power plants. Even with carbon capture and storage (CCS) the importance of the latter will decline further. The capacity of nuclear power plants and coal-fired power plants will decrease by more than 50 percent by 2050. France, the United Kingdom, the Netherlands and Belgium have announced plans to phase out coal. As a result, hard coal in particular is seeing a sharp decline in currently installed capacity to roughly 50 percent by 2030. Overall, the proportion of generation capacity of controllable thermal power plants is reduced from 50 percent to around 30 percent. This has a considerable influence on the structure of electricity prices, which are increasingly characterized by vRES.

Why is electricity demand rising by 2050? 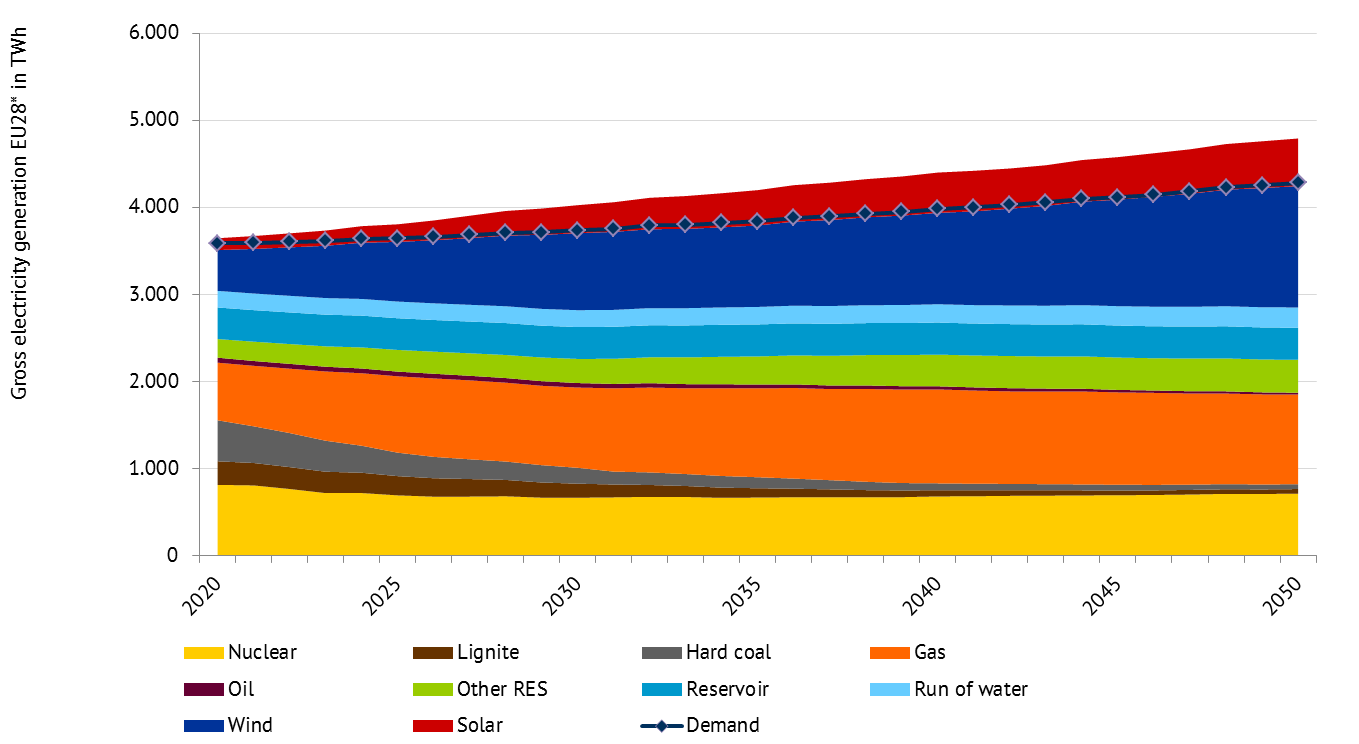 The electricity demand will increase by about 25 percent until 2050. Above all, population growth and higher electrification in households increase the demand for electricity. Most of the economic growth in the European Commission’s plans takes place in the tertiary services sector, which also needs more electricity. In the industrial sector, increased efficiency prevents a significant increase in electricity consumption. This scenario conservatively assesses how sector coupling between the electricity, heat and transport sectors will develop. In passenger transport, hybrid cars will reduce the consumption of commodities, such as oil. At the same time, emissions in the heating sector will decrease as a result of increased efficiency and lower consumption of coal and oil.

In comparison to consumption, electricity production increases on the one hand through exports to states that are not part of the European Union. Exceptions are Norway and Switzerland, which are included in the evaluations. On the other hand, there are also surpluses from vRES, for which there is no demand in the scenario and therefore have to be shut down. 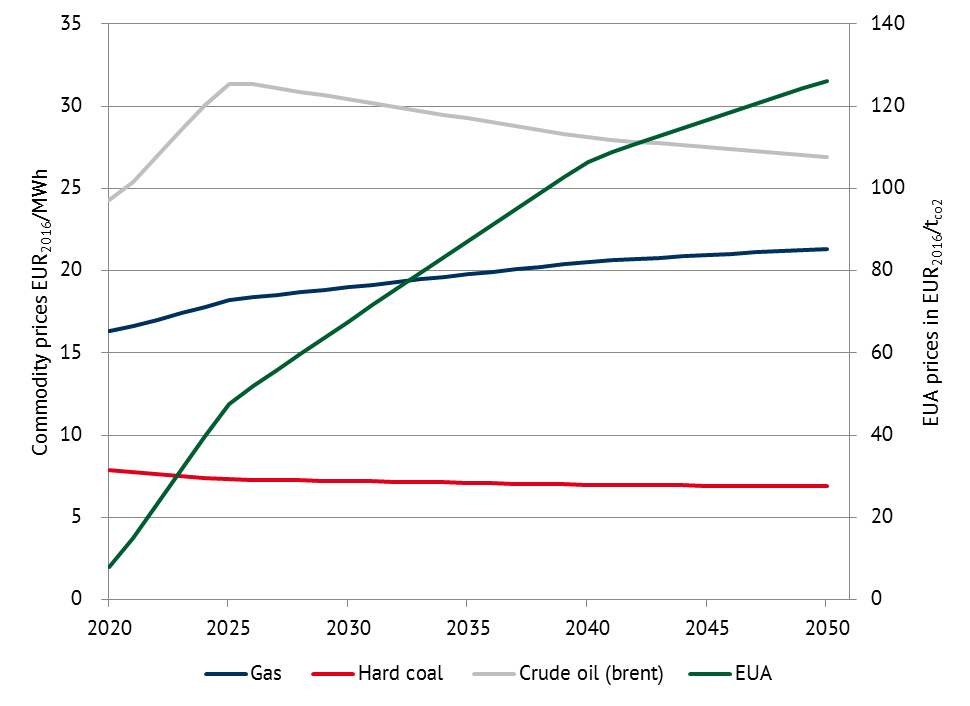 The development of the most important commodities until 2040 is based on the “Sustainable Development” scenario of the IEA’s World Energy Outlook 2017 [2]. In this scenario, three goals are defined: The stabilisation of climate change, clean air and universal access to modern energy [3]. In this scenario, prices for CO2 certificates rise significantly. The prices for gas, oil and hard coal remain at a rather constant level. The development from 2040 to 2050 is an extrapolation. 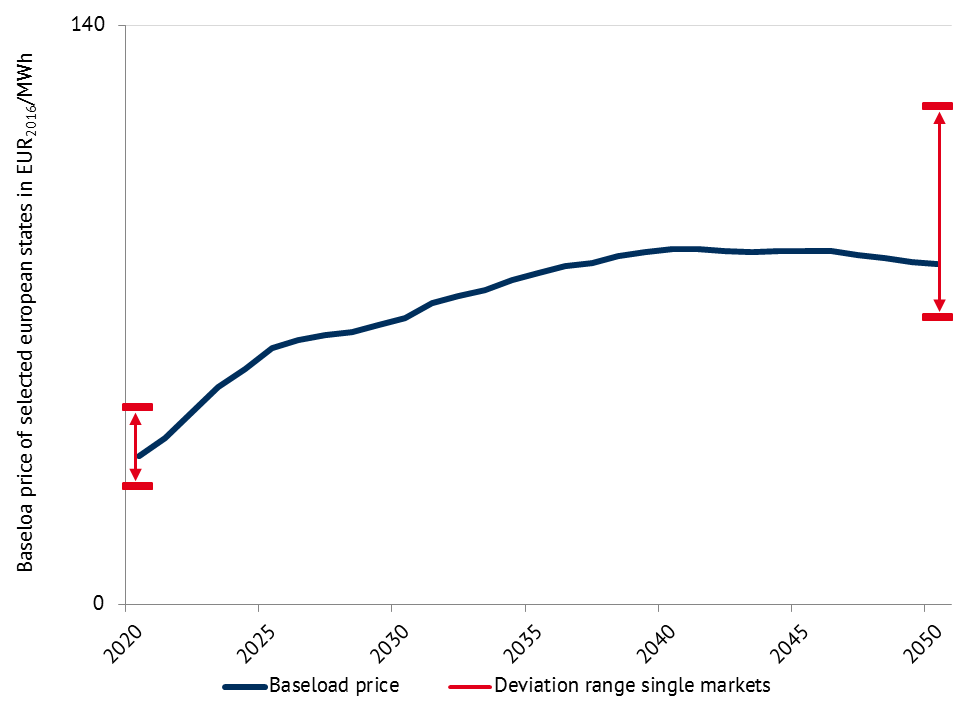 Figure 4: Annual baseload prices and the range of deviations of national markets of selected countries in Europe on average, Source: Energy Brainpool 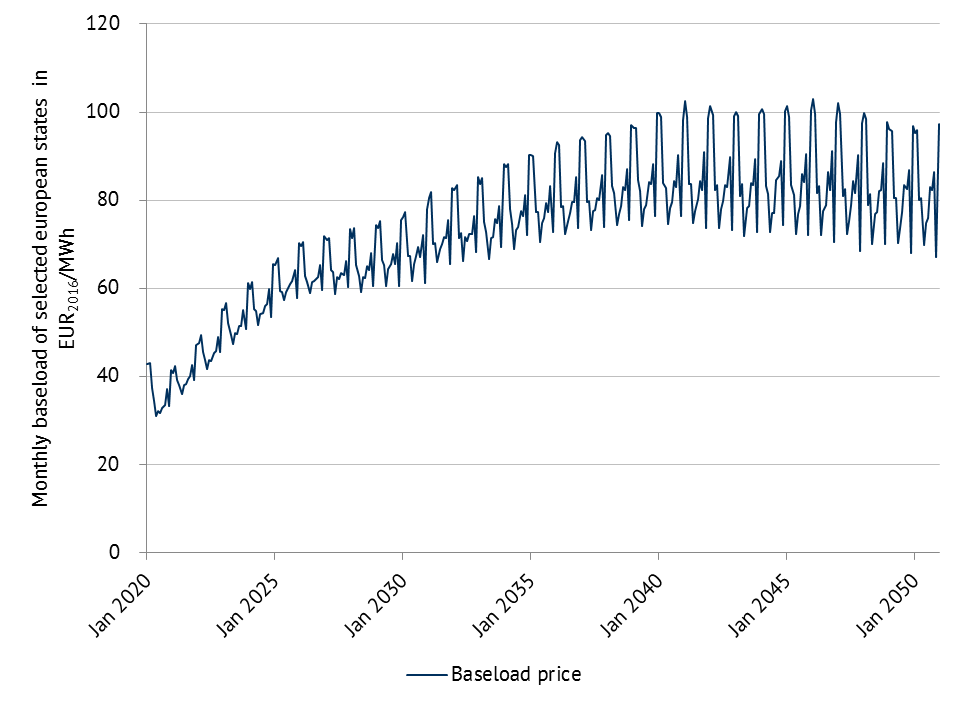 If we have a glance at electricity prices on a monthly basis, the seasonality and volatility of the electricity market can be noticed. For the winter, the analyses demonstrate rising prices due to the temperature sensitivity of electricity demand. By contrast, electricity prices are usually much lower in summer. This effect is exacerbated by the rising share of solar power generation, which has a dampening effect on electricity prices. 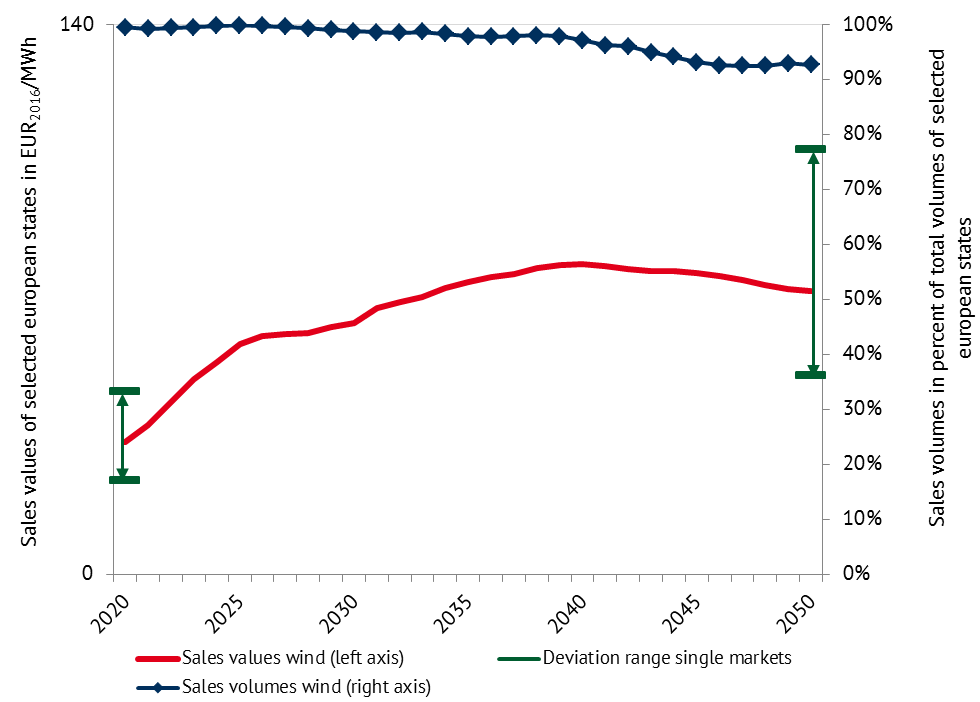 In many hours controllable, fossil-fueled power plants set the price despite the high proportion of renewable energies, allow rising positive revenue streams. The deviations between different markets exhibit how different the country-specific average revenue potentials are for wind turbines. 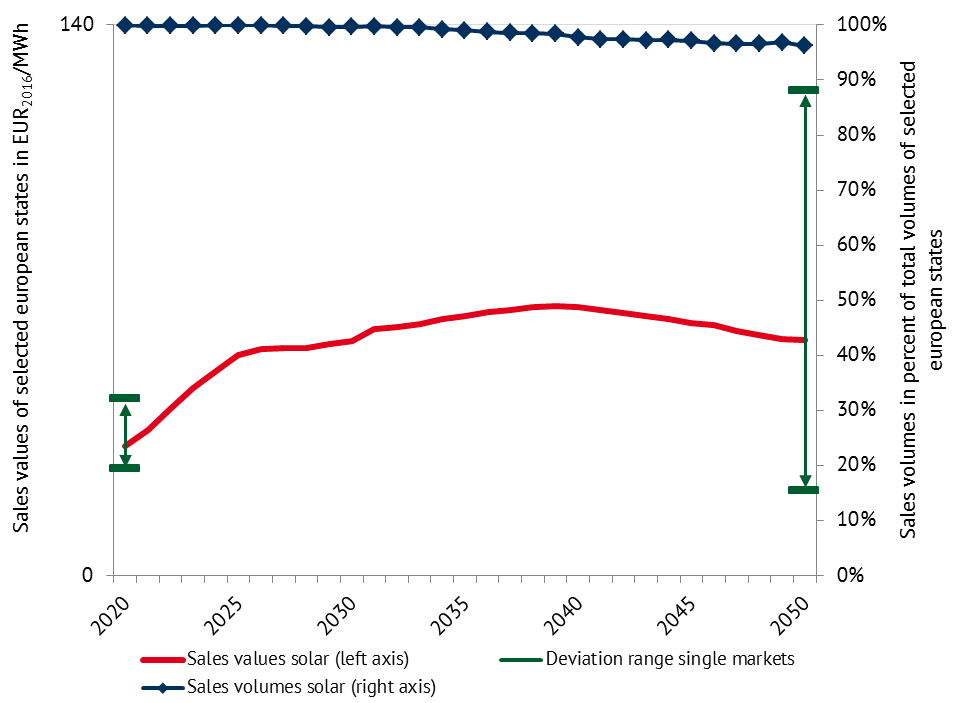 The development of the sales value for solar energy is similar to the trend of sales values of wind energy, but on a lower level. The reason for this is the pronounced simultaneity effect of solar energy: Most of the electricity is generated during the daylight hours in summer. In hours, in which a lot of solar power is generated, the electricity price and thus the revenues decrease.

The sales volumes for solar energy only slightly decline on the EU average level, but decline considerable in individual countries. The huge deviation of the solar sales values in the individual countries shows how much the revenue potential varies. However, it should be noted that high revenues are possible in a sunny country, even with low sales values. The solar power plants have much higher full load hours in those countries.

Solar thermal power plants are a marginal technology in the scenario and are not being expanded on a large scale. 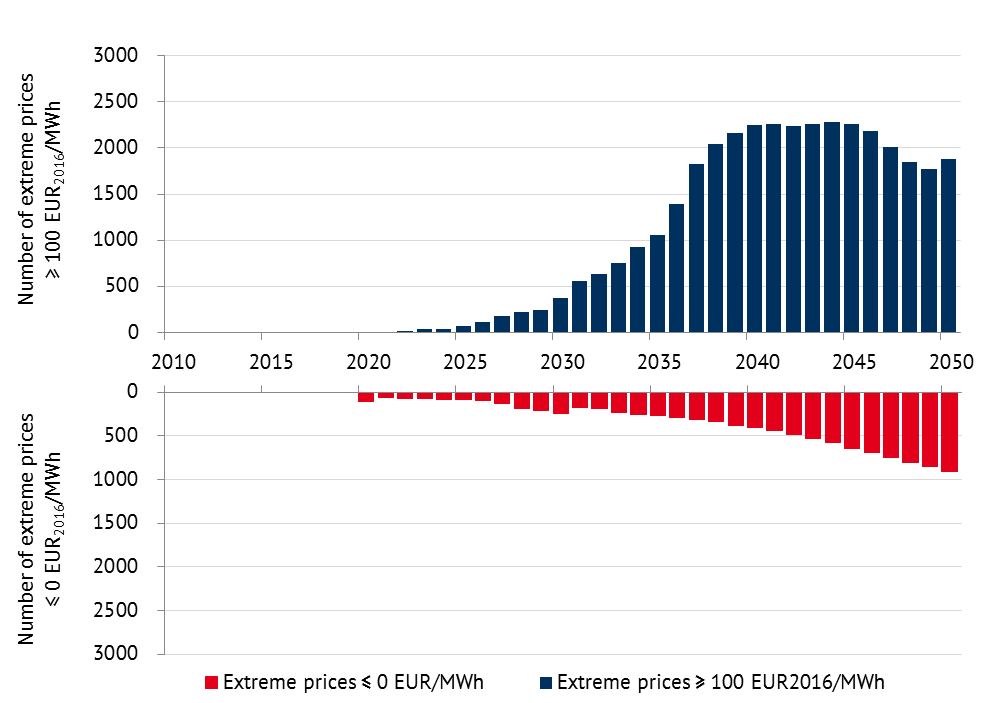 In the scenario various factors lead to a significant increase in price volatility. On the one hand, the generation costs of controllable fossil power plants rise in hand with the development of commodity prices. On the other hand, the expansion of fluctuating, renewable energies has a price-lowering effect. As a result extreme prices are more frequent from today’s perspective and have become a normal part of the electricity price structure of the day-ahead market.

Extreme prices are defined as electricity prices equal or below 0 EUR/MWh and above 100 EUR/MWh. The expected relationship between the two extremes holds market opportunities for new market participants and technologies, such as storage systems.

Bet on falling costs or rising electricity prices? – The results of the third wind tender and what they mean

Sector Coupling – How far is Germany?