There are currently numerous debates about the potential of hydrogen. The question is which role hydrogen will play in the energy transition. In this article, you can find out which political regulations have already been made and which changes are just around the corner.

Here, in the second of two articles on hydrogen in the energy system, we also look at the ramp-up of required electrolysers and examine current regulatory developments. You can access the first article here.

In July 2020, the European Commission published the EU Hydrogen Strategy. It contains a precise vision of the expansion targets for hydrogen. The strategy is divided into three phases (see Figure 1): 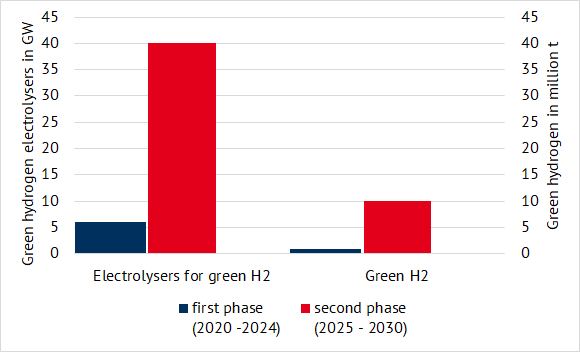 The take-off for green hydrogen in Germany

In a joint study with Greenpeace Energy, Energy Brainpool investigated the future use of green hydrogen in Germany. Based on the results of our modelling, various scenarios were developed. We would like to explain some of the results as well as two of the five developed scenarios in this article. A more detailed insight can be found in our study directory.

In the first step, the following figure 2 shows the planned capacity of the electrolysers depending on the scenario for the reference years 2025, 2030, 2035 and 2040. In the reference scenario (“Stated Policies”), the expansion follows the targets of the German National Hydrogen Strategy and the National Development Plans.

The capacity of electrolysers increases to 5 GW by 2030 and to 10.5 GW by 2040. It is assumed that the expansion of renewable energy plants follows the ramp-up of hydrogen electrolysers.

In the “Acceleration-cost-optimised” scenario, the solar and wind power supply rises steeply. Accordingly, the fleet of electrolysers can be expanded rapidly. Their electrical capacity is 107 GW in 2040 – 10 times the projected capacity in the Reference Scenario. 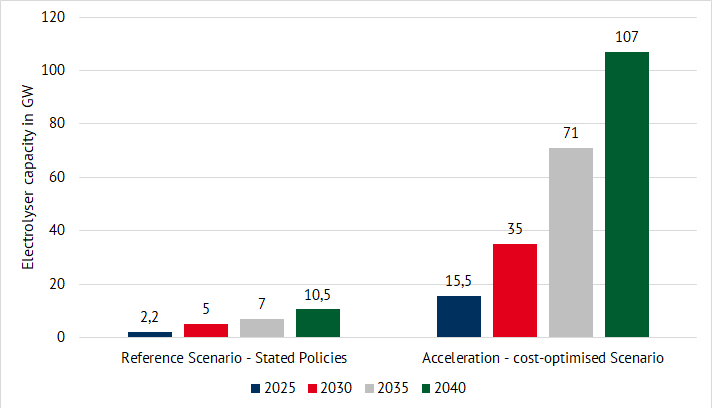 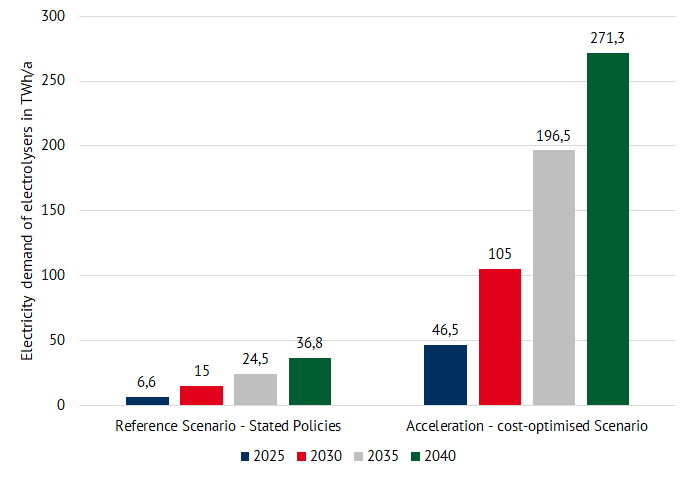 Figure 3: planned electricity demand of the electrolysers depending on the scenario for the key years 2025, 2030, 2035 and 2040 (cumulative) (source: Energy Brainpool)

Therefore, there is still a wide scope of possible developments for hydrogen and electrolysers. The paths that will ultimately be taken depend heavily on the political framework conditions of the coming months and years.

What will be important in the upcoming months?

At the beginning of this year, the new renewable energy act was passed. The new paragraph 69b EEG 2021 exempts electricity purchases from payment of the EEG levy as long as the electricity is used by a company to produce green hydrogen. The electricity used for production may only come from renewable energy sources that do not receive support under the EEG.

Plus, the electrolysers must be connected to the grid via their own metering point. Where and for what the hydrogen is used afterwards is irrelevant for the exemption. Furthermore, this only applies to facilities commissioned before 01.01.2030. With the new paragraph 27b KWKG, the CHP levy is also waived insofar as the above-mentioned conditions are met.

These exemptions from the levy relate directly to the new paragraph 93 EEG 2021 and its definition of green hydrogen. The paragraph provides for a comprehensive authorisation to issue ordinances on requirements for green hydrogen. Such a clarifying ordinance is to be presented by the BMWi in spring 2021. In particular, “content-related, spatial or temporal requirements can be set in order to ensure that only hydrogen that has actually been produced with electricity from renewable energies. And that is compatible with the goal of sustainable development of the energy supply is considered green hydrogen”.

It therefore remains to be seen what requirements will be placed on the production of green hydrogen in the future. One question will certainly be how green electricity procurement is to be proven, since guarantees of origin will probably not be sufficient (source: BHH Group).

On 10 February 2021, a bill to amend the EnWG (German energy law) was passed. The draft contains supplemented or new definitions, a new section on the regulation of hydrogen networks and transitional provisions. Hydrogen is now defined as an independent energy carrier alongside gas. However, the new regulations only apply to pure hydrogen pipelines and not to networks in which hydrogen is mixed with natural gas. It should be noted that the regulations are transitional solutions until the EU Commission delivers concrete proposals for the regulation of hydrogen at the end of 2021. However, implementation into German law is not expected until 2025 (source: CMS).

It remains exciting to see what changes will follow from politics. Possible promotion instruments for green hydrogen that could be mentioned are the obligation to have a CO2-label for PtX products, a quota system for green hydrogen or “Carbon Contracts for Difference” (CCfD).

A lot of information on hydrogen will also be available at our open seminar on 15 & 16 June 2021 hydrogen as a game changer and in our networking event at 23 September potentials for the hydrogen economy (German only, but English available on demand).

We will be happy to assist you in clarifying any questions you may have on the topic of hydrogen. In particular, we can support you in the evaluation of green power PPAs for electrolysers. Feel free to contact us directly.