There are more and more indications that the increased use of hydrogen from renewable or non-CO2-emitting sources is necessary for increased climate protection efforts. The Federal Government’s National Hydrogen Strategy aims to set the framework for hydrogen production and utilisation in Germany.

This first of two contributions looks at the question why hydrogen is becoming increasingly important for decarbonisation and what role the National Hydrogen Strategy can play in this context.

Why is hydrogen becoming increasingly important?

Industry, network operators as well as science and research agree: CO2-free hydrogen is necessary to achieve the ambitious decarbonisation targets for Germany by the middle of this century. This is also shown by the current studies for the transformation of the German energy system by Research Centre Jülich and the RESCUE study by the Federal Environment Agency.

Hydrogen can be used for many purposes. As a raw material, it is already used on a large scale in the chemical industry and forms the basis for many different secondary products, such as ammonia, methanol or plastics. Plus, hydrogen can be both an energy carrier and serve as energy storage in chemical form. In addition, hydrogen can also play an important role in low-emission production processes in the steel industry (source: Agora Energiewende).

And last but not least, hydrogen can be used in applications and sectors that would otherwise be difficult to supply directly with electricity: in heavy-duty transport, shipping and aviation. Figure 1 illustrates the possibility of sector coupling in the industrial sector with the help of hydrogen using the example of the “Westküste 100” project (source: Westküste 100) 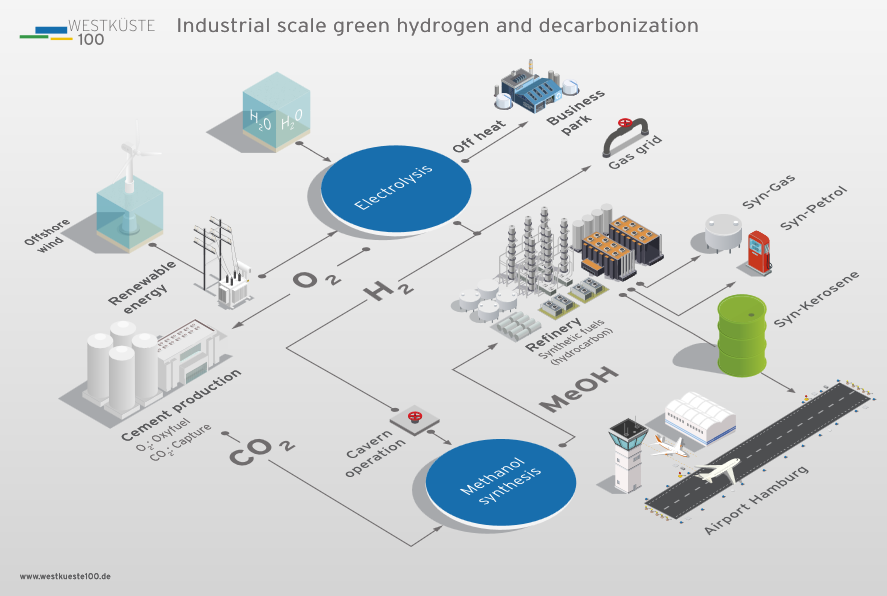 The importance of hydrogen for achieving climate policy goals is also increasingly recognised by politicians. However, the use of hydrogen for the purpose of decarbonisation only makes sense if it is produced CO2-free or at least CO2-neutral.

CO2-free or “green hydrogen” is produced by electrolysis using electricity from renewable energies. So-called “blue hydrogen” can be CO2-neutral. In this case, the H2-molecules are produced with the help of natural gas in the steam reforming process. The CO2 produced in the production of hydrogen can then be captured and stored (Carbon Capture and Storage, CCS) (source: BMBF).

In summer 2019, the development of a German hydrogen strategy started. Further ideas for the development of a National Hydrogen Strategy were discussed at an event in Berlin in November 2019. The four ministries involved (BMWI, BMVI, BMZ and BMBF) also presented a discussion paper there (source: BMWI). It formed the basis for the National Hydrogen Strategy.

Until the end of 2019 the government wanted to further develop this strategy (source: PV Magazine). Finally, the elaborated version was submitted for coordination between the four ministries at the beginning of February 2020.

On compact 32 pages, the authors described 37 measures for the promotion and expansion of hydrogen production and utilisation in Germany. With political support, the German industry is to become the leading international supplier of hydrogen technologies.

The German Minister of Economics, Peter Altmaier, sees “great industrial policy opportunities” (source: BMWI). Furthermore, the strategy contains an action programme with which the market ramp-up and the foundations for a functioning hydrogen market in Germany by 2023 are to be initiated (source: Energate). After some delays, the National Hydrogen Strategy has been finalised in June 2020.

The key points of the National Hydrogen Strategy

The strategy paper speaks of CO2-neutral hydrogen, which includes in particular blue hydrogen with CCS technology. In order to enable the export of technologies, the German government considers a strong domestic market to be important. By 2030, electrolysers with a capacity of 5 GW are to be installed in Germany, producing about 14 TWh of green hydrogen using 20 TWh of electricity, thus providing about 15 percent of the hydrogen consumed in Germany by then.

The CO2-neutral hydrogen will be used mainly in industry and the transport sector. Secondarily, the heating sector is mentioned. The state-induced price components, such as the levy of the renewable energy law or grid fees, would have to be fair (source: Energate). Currently, these components make hydrogen produced by electricity in electrolysers more expensive.

All in all, the industry is to receive massive aid in order to be able to convert its production processes (7 billion EUR). At the same time, more than 3 billion EUR in subsidies should be available until 2026. The purchase of hydrogen vehicles is also to be encouraged. The German government is providing a total of EUR 3.6 billion for this purpose (source: Electrive). Figure 2 depicts several of the hydrogen regions and funded projects in Germany. 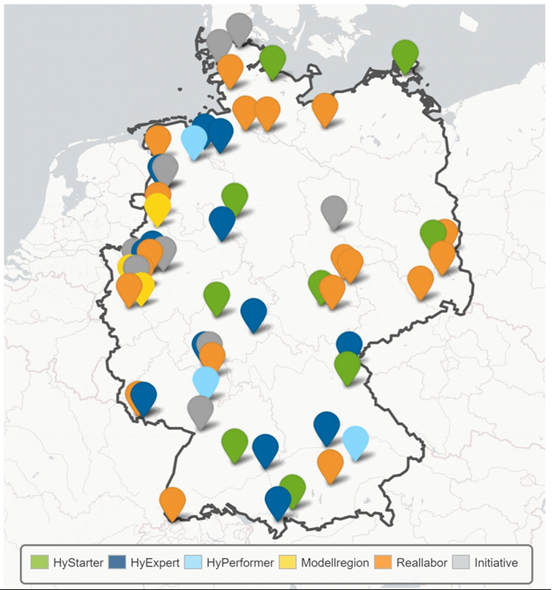 Another major topic is international cooperation. Since Germany will probably not be able to cover its demand for green hydrogen domestically, imports are necessary. In order to provide for that corresponding projects and the build-up of supply chains at an early stage is being started. Besides that, an intensive search for partner countries is to be carried out and international cooperation strengthened.

The Federal Ministry of Education and Research sees hydrogen from African countries as an important building block for the energy turnaround (source: BMBF). “With green hydrogen, the geographical advantages of renewable energies could become a development engine for the societies there,” said Federal Research Minister Karliczek (source: BMBF).

A National Hydrogen Council was also established in summer. 26 experts are to make proposals and recommendations for the implementation of the hydrogen strategy. For example, the demand now implemented in the amendment of the renewable energy law 2021 is to exempt electricity used for the production of green hydrogen from the renewable energy levy.

In the second part of this series, we will have a closer look at our current studies and reports on hydrogen in the energy system.