Hydrogen is and remains a hot topic in February 2021 with new project announcements. Furthermore, there were outright records in the prices for CO2-certificates. Commodity prices also rose in February, while renewable power generation was weak compared to the same month last year.

After two years of research, the HyDeal project is slowly gaining momentum. The goal is to provide green hydrogen at a price of 1.50 EUR/kg for customers in Germany, France and Spain by 2030. Transport and storage are included in this price. The plants are to supply 3.6 million tonnes of green hydrogen annually. A total of 30 energy actors are involved in this project and plan to offer green hydrogen at the price of fossil fuels throughout Europe in the future.

In the first stage, starting in 2022, green hydrogen is to be produced by electrolysis with solar electricity from PV plants with a total capacity of 10 GW on the Iberian Peninsula (source: PV Magazine).

Hydrogen trends and targets in the EU

Figure 1 shows both the overall EU target for the expansion of electrolysers and the targets of selected European countries for 2030. More information on the German government’s National Hydrogen Strategy can be found in the previously published articles. The figure shows that France aims to lead the way with 6.5 GW of electrolyser capacity in 2030. 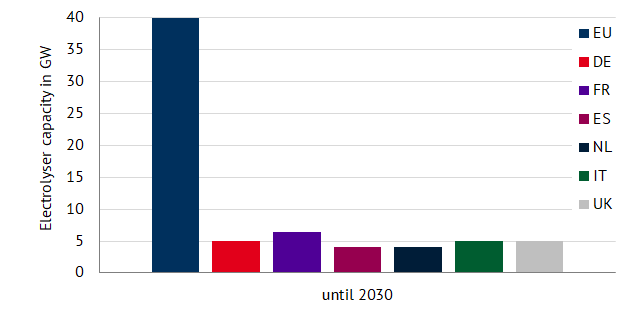 Should the EEG levy be abolished from 2022?

Before the end of the legislative period, the German government is aiming to determine a change in the funding of renewable energies. Until now, the financing of renewable energies has been driven by the EEG levy, which is currently 6.5 ct/kWh. For the plants going into operation in 2022, this might change in the coming year and the financing is to be supported via the federal budget. This is intended to clear the way for abolishing the EEG levy altogether.

The purpose of the restructuring is primarily to put a stop to the growth in electricity prices and to promote sector coupling. According to the Federal Minister for Economic Affairs and Energy, Peter Altmaier (CDU), this is intended to create the basis for “being able to achieve the goal of 65 per cent renewable energies by 2030 and greenhouse gas neutrality in electricity supply in Germany before the year 2050” (source: Montel).

The upward trend in prices for EUAs has rarely been as steep as in 2020 and early 2021. Although prices fell sharply in early March 2020 due to the first lockdown, they rose again by July 2020 and then initially settled in a price corridor of 25 to 30 EUR/tonne (see Figure 2). From November 2020 to February 2021, prices then increased by 150 per cent compared to the low in March and exceeded 40 EUR/tonne for the first time. 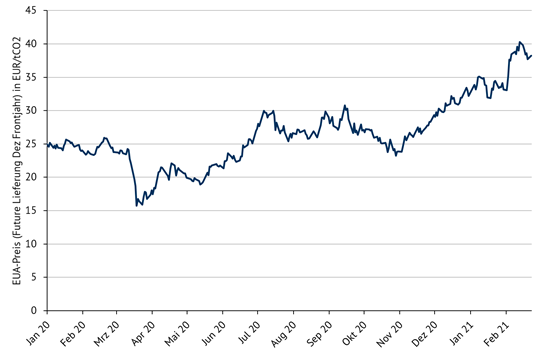 Figure 2: development of EUA prices from January 2020 to February 2021

There were two key drivers for this extreme price development:

First, the prospect of the first vaccines against the COVID-19 virus significantly improved the general economic outlook for the years 2021 to 2023, so that CO2 emissions are also likely to rise again.

On the other hand, negotiations began at the EU level on a tightening of the CO2 reduction target. If the EU ETS as a market-based instrument were to be responsible for a large part of these emission reductions, there would probably be fewer freely allocated emission certificates and higher withdrawals of superfluous certificates from the market. Already, this new EU climate target is being priced in by traders, leading to rising prices.

At the end of February 2021, CO2 prices then fell again, as some holders of EUAs presumably took advantage of the high prices and sold their certificates while taking profits (source: Klimareporter).

Mixed developments on the futures market

As vaccination rates rose and Covid incidences fell in February 2021, Germany’s economy is gradually recovering from the consequences of the COVID 19 pandemic. In the first week of February, the below-average cold weather caused futures market prices to rise rapidly. Anyway, at the end of the month, prices for oil, CO2 and gas are higher than at the beginning and continue to rise.

Saudi Arabia announced in early January that it would cut its oil production by 1 million barrels per day in February and March to support oil prices. And the effects can be seen in February (source: Handelsblatt). Oil prices have risen by almost 10 per cent within the last month, reaching a high of USD 65.78/bbl.

At the beginning of the month, the front year for gas, like the other commodity prices, experienced growth. However, accompanied by milder temperatures, more of a sideways movement can be observed over the rest of the month.

Until mid-February 2021, the leading CO2-contract had experienced large price increases due to continued speculative buying and reached its new record at just over EUR 40/tonne.

Especially in the first week of the month, the rise in CO2 prices ensured that German Cal22 prices followed along. The front-year delivery reached a two-year high of 54.25 EUR/MWh. The rest of the month saw little movement (source: Montel).

The share of renewable energies was relatively low in February 2021 with an average of 43 per cent compared to the previous year (62 per cent). At the same time, it was also marked by significant fluctuations in the feed-in profile. The reason for this is the extreme change in weather that was observed during the month. At the beginning of the month, there were unusually cold temperatures and heavy snowfall. As a result, there was initially very little solar feed-in, so that solar energy was at a rather low level of 2.2 TWh in February.

Towards the end of the month, the weather became increasingly mild and the share of renewable energies rose again. Wind feed-in also fluctuated strongly over the month, ranging between 3.12 GW and 39.11 GW.

Due to the low feed-in of renewable energies, the feed-in of conventional energy sources was high, especially at the beginning of February. Gas in particular reached a record high for February with a monthly net contribution of 6.9 TWh (source: Energy-Charts).

Figure 4 shows the electricity generation from different technologies and the day-ahead prices in February 2021 for Germany.