The energy systems of the two largest EU countries differ. A comparison of the electricity sectors in particular shows the contrasts. Electricity generation in France is dominated by nuclear power, which accounts for almost 70 percent, while Germany’s electricity mix relies on coal and natural gas as fossil fuels for one-third of the total. Follow us in this article as we explore the differences between the two energy systems.

Just by looking at the primary energy consumption of the two countries, the differences between France and Germany become clear. France’s primary energy consumption of about 10000 PJ was for many years about one third lower than that of Germany. However, in addition to the higher economic output, the high shares of coal-fired power generation in Germany also played an important role.

Primary energy consumption has been declining in both countries since 2010. Since that time, coal-fired power generation in Germany decreased (especially from 2017), while renewable energy shares grew. Renewable generation also increased in France during this period, but less so than in Germany. For example, primary energy consumption in France declined by 7.8 percent between 2010 and 2019, and by as much as 10 percent in Germany. The Corona pandemic led to an economic slump in both Germany and France, resulting in a drastic drop in energy consumption as shown in Figure 1 (source: AGEB, IEA). 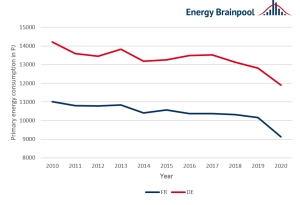 While the share of oil in primary energy consumption is relatively similar in France and Germany, the shares for other energy sources lie far apart. In 2019, for example, nuclear energy accounted for 43 percent of French primary energy consumption. In contrast, with only 6 percent in Germany at that time. After 2023, the generation of electricity from nuclear power plants in Germany will decline to zero as the last reactors are shut down. There are also big differences in the share of coal. While hard coal and lignite still accounted for 17 percent of primary energy in Germany in 2019, the share of coal in France was only 3 percent in the same period (source: AGEB, Climate Transparency). Figure 2 illustrates the shares of different energy sources in primary energy supply in France (inner ring) and Germany (outer ring). 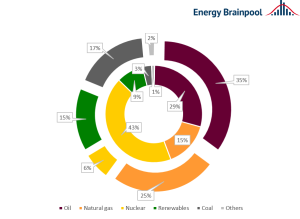 German power generation capacity is best described as a colorful mix. With over 120 GW of renewable capacity and more than 70 GW of fossil power plants, Germany had a total capacity of over 220 GW of power plant capacity on the grid in 2020 (source: BDEW). In France, total capacity was just over 130 GW, with just under 60 GW of renewable capacity installed. At the same time, nuclear power plants account for the majority of French capacity, with over 61 GW of installed capacity (source: IEA). Figure 3 compares the generation capacities in the two countries. 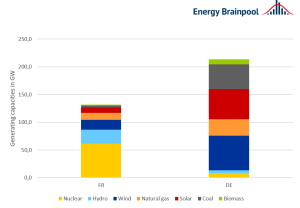 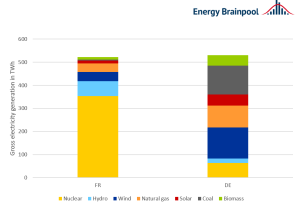 Figure 4: Gross electricity generation in 2020 in France (FR) and Germany (DE) in TWh, excluding other and oil (source: Energy Brainpool, 2022)

With the new traffic light coalition, the signs in Germany point to a faster implementation of the energy transition (see our report on the traffic light coalition). Also, under the impact of the armed conflict in Ukraine, Europe’s energy supply will not remain unchanged. Until now, natural gas was still politically high on the agenda as a bridge to climate neutrality. This has changed significantly after the events at the end of February 2022.

According to a key issues paper dated February 28, 2022, Germany is to achieve its power supply entirely from renewable energies by 2035. To this end, the output of onshore wind energy should double to up to 110 GW by 2030 (source: Handelsblatt).

The long-term outlook for nuclear power in France is uncertain. According to French President Macron, nuclear power is still entitled to a maximum of 40 percent of electricity generation in 2050 (source: Euractive).

Cooperation between the two countries regarding the transformation of their energy systems will certainly have to intensify in the coming years.

Are you interested in alternative energy resources? Then find out more about our in-house training sessions on hydrogen and sustainable procurement strategies. For further topics please have a look at our seminar overview.

Click here for the latest article >> Natural gas & Co.: Will the next winter be cold?