The current discussion in Germany and Europe regarding a possible supply stop of natural gas & Co. from Russia in the course of the Ukraine war is moving many people. In part, the debate is not based on factual knowledge. This blog article takes a data-driven look at the issue of supply security.

In this analysis, we assume two phases to ensure supply security in Europe. In the first phase, two paths are conceivable: One path involves a supply freeze from Russia. On the contrary, there is the second path, in which Russia will continue to supply a minimum of natural gas in accordance with its commitments.

Both paths have the same goal: to establish a secure supply of oil, natural gas and coal. Moreover, at the same time to realise a long-term transfer to a regenerative energy world with synthetic fuels. That is the second phase.

What is the starting situation?

In 2020, Europeans will have consumed 5,000 TWh of natural gas. In addition, the natural gas storage facilities with a total capacity of 1,000 TWh still had to be filled. At present, they are stocked to a level of about 30 percent. Therefore, in a worst-case scenario – the rest of March 2022 remains cold – we assume that we need an additional 850 TWh in the first year to fill the storage facilities.

The following chart shows the current gas import volumes extrapolated to 2022 by means of LNG from Algeria and Norway, the current import from Russia and own production within the EU, as well as the natural gas demand from 2020 just mentioned. 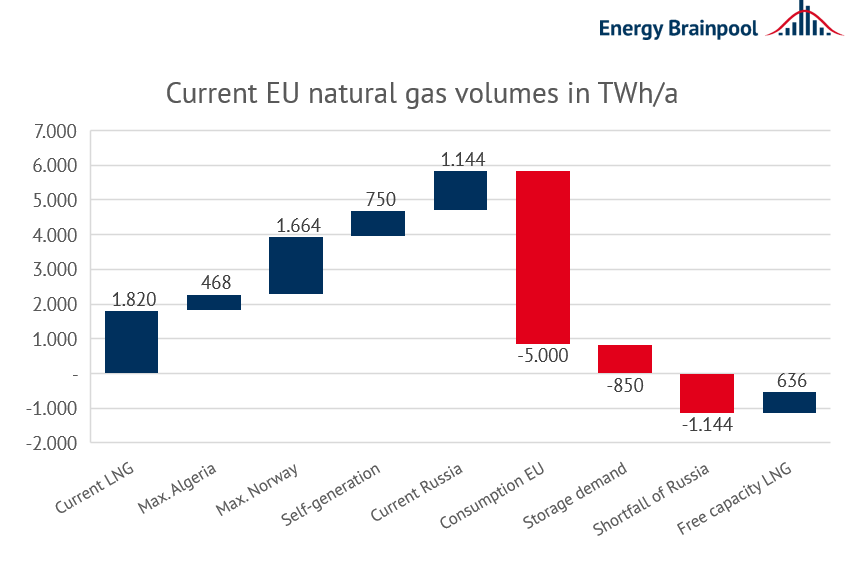 Figure 1: annual natural gas volumes in the EU (source: ENTSO-G and own calculations, 2022)

In the event of a total loss of natural gas supply from Russia, a further 640 TWh of LNG imports could be used. However, it can be seen that there would then be a shortfall of around 500 TWh of natural gas in Europe. This corresponds to about 10 percent of the total volume. The bottleneck here is mainly caused by regasification capacities in Europe. Far less relevant are the exporting countries (USA or Qatar) or the LNG fleet, which is expanding significantly every year.

What happens if Russia stops supplying?

Russia’s failure as a supplier would not have an immediate impact on natural gas consumption. The loss will only be noticeable when peak consumption occurs in January, February and March 2023 – usually the coldest months of the winter.

This is because these volumes usually come from the natural gas storage facilities. Without Russia’s deliveries, however, natural gas storage in Europe remains at a level of 30 per cent. This amount would be used up in the first few months of the heating season. Consequently, there may be significant shortages in the second phase of the winter. This can be seen in the graph below. 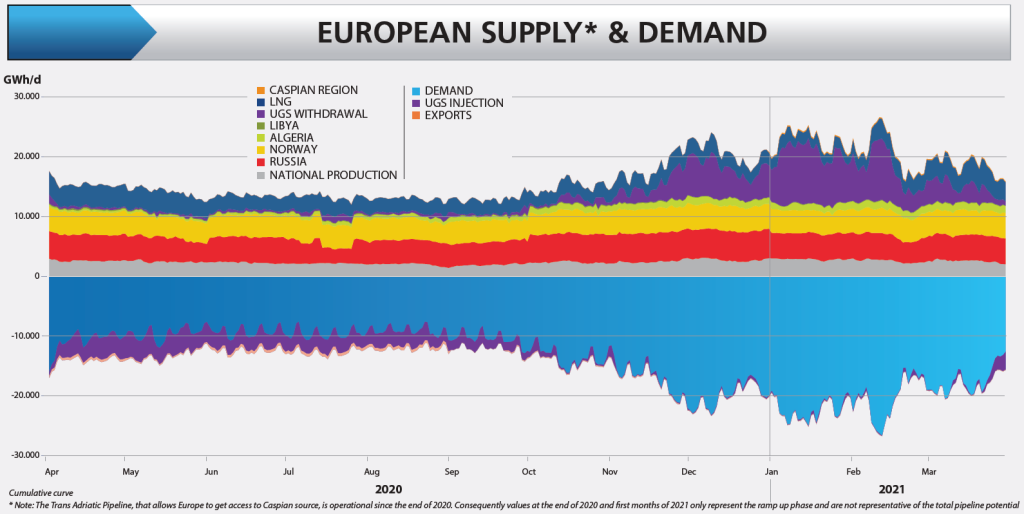 How can the supply gap be closed?

In the short term, the supply gap can only be closed by reducing natural gas consumption. This is because the other energy sources (oil, coal) would also be affected by a supply shortfall from Russia. In the medium term, Europe needs at least six more LNG regasification terminals, each of which can bring about 100 TWh of natural gas into the system. However, this will not be feasible before 2026.

Until then, we will have to reckon with a natural gas price level in Europe that is characterised by panic, cold waves in Asia and LNG export costs. In our view, this situation will only change significantly when renewable hydrogen prices will determine the price level as the only alternative to natural gas. The following figure shows the expected price levels. 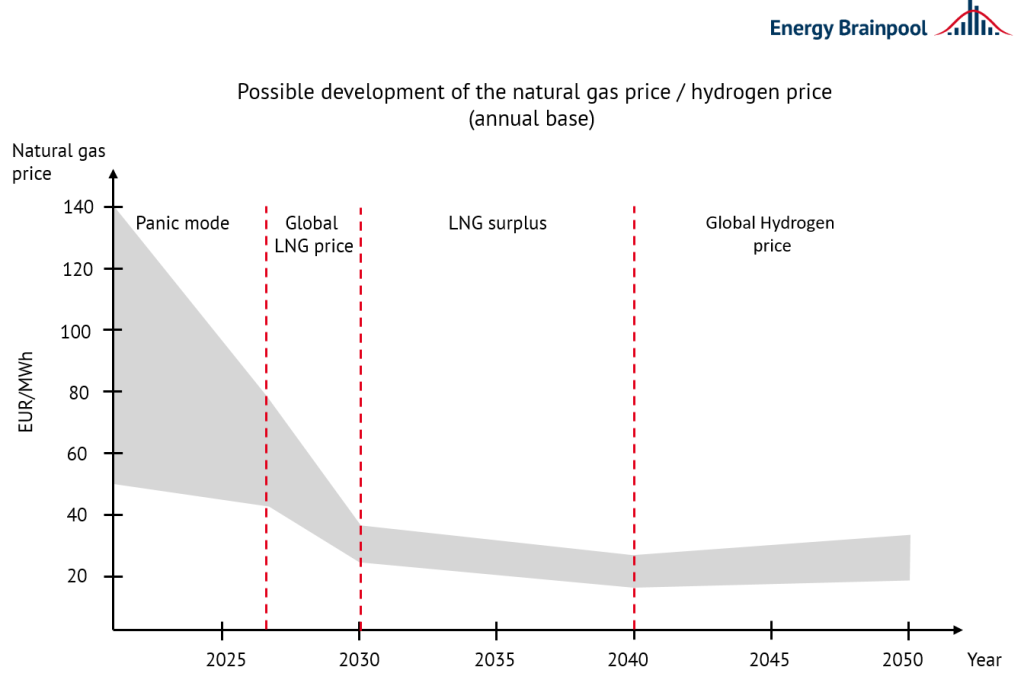 In the panic phase until 2026, significant investments will be made to compensate for the loss of Russian imports and to find alternatives for natural gas use. A significant problem here is that a large share of natural gas is used for heat supply.

Replacing this with fluctuating renewable energies will not be possible in the short term. It is true that alternatives for heat supply in housing will be implemented (heat pumps, etc.). But this will not significantly lead to consumers consuming much less natural gas.

Chart 4 shows, using Germany as an example, which measures could be implemented in the short term. On the one hand, there is the much-discussed extension of the lifetimes of nuclear power plants and a postponement of the coal phase-out in 2022.

What does the analysis show in detail?

In a scenario run based on the fundamental model Power2Sim, the analysts from Energy Brainpool compared the following: What is the impact of the planned phase-out of nuclear energy and the phase-out of coal on natural gas consumption, also with the perspective of a possible lifetime extension of nuclear power plants? This results in a saving of 17 TWh of natural gas per year with approx. 1,000 TWh of natural gas consumption. Actually, the reason for the small reduction lies in the district heating decoupling of the natural gas power plants. The existing nuclear or coal-fired power plants cannot replace this. The second measure is the envisaged temperature reduction in households under the motto “Freeze for Peace”.

Our conclusion: reducing room temperatures in the household sector actually has a greater impact on natural gas consumption than extending the running times of power plants. Initial estimates put the impact at 21 TWh per year. The following graph shows these effects. 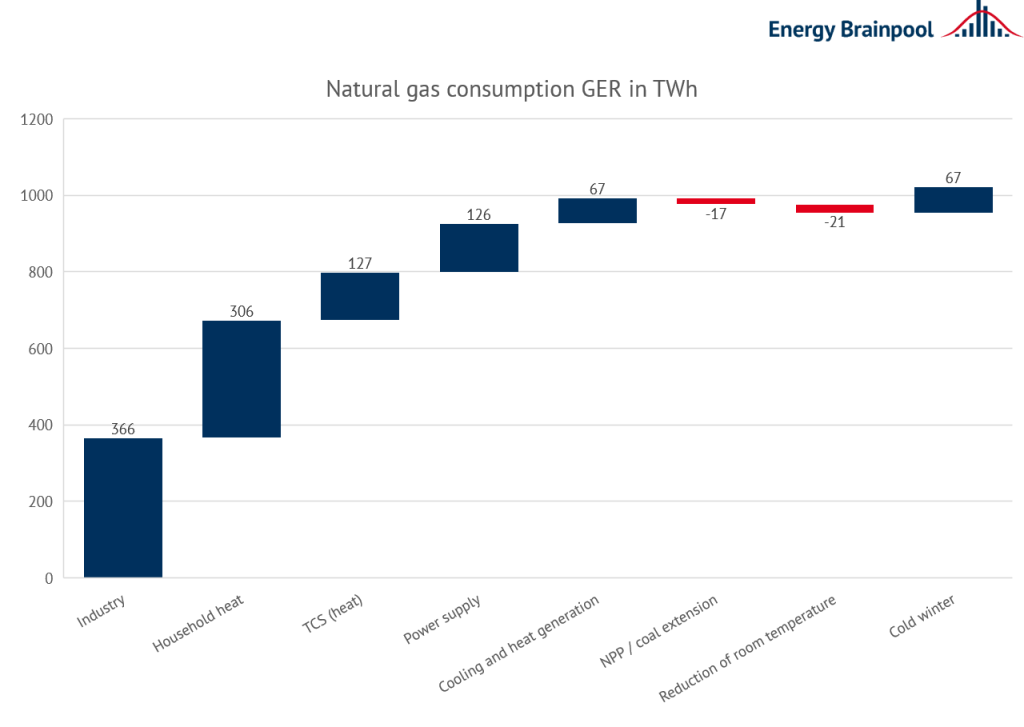 The savings are offset by the additional consumption of natural gas, especially heating gas, during a cold winter. The historical fluctuation range was 67 TWh in a winter season.

To sum up: We conclude that Germany’s dependence on Russian natural gas is so great that if supplies from Russia were stopped and the remaining natural gas volumes were distributed across Europe, Germany would have to reduce its natural gas consumption in the heating gas sector or in the industrial sector by 100 TWh per year. From today’s perspective, this does not seem possible. It can only be adequately compensated for by the rapid development of LNG terminals.