The Russia-Ukraine war is having a lasting impact on the energy market. While prices on the short-term and futures markets are skyrocketing, the government is trying to counteract this. With a relief package, the end consumer is to be less burdened and the emergency plan is to secure the gas supply. In the EEG “Easter package”, higher tender volumes for renewable energies were written down.

On 16 March, the Federal Cabinet introduced tax relief measures to ease the burden on households and businesses. According to Lindner, the relief amounts to 4.5 billion euros. The resolution includes, retroactive to 1 January, an increase in the commuter allowance, an increase of the basic tax-free allowance in the tax return by 363 euros, and the employee allowance will rise by 200 euros to 1,200 euros. In addition, one-time payments for recipients of social benefits are included.

On 24 March, the coalition of SPD, Greens and FDP agreed on another energy relief package. The reason for this is the sharp rise in energy costs, which have recently been influenced in particular by the ongoing Ukraine crisis.

The agreed package includes an energy price reduction of 300 euros for employed persons as well as tax cuts on petrol and diesel. Fuel tax is to be reduced to the EU minimum for 3 months. According to Finance Minister Christian Lindner (FDP), this will reduce the price of diesel by 14 cents per litre and petrol by 30 cents per litre. For the same period, the coalition agreed on a monthly ticket for public transport of 9 euros (source: iamexpat).

On 30 March, the Federal Ministry of Economics announced the first of three warning levels for the German gas supply. The deciding factor was the announcement by the Russian President, Vladimir Putin, that he would only accept payments in roubles and no longer in euros or dollars, as otherwise a supply stop could follow. Putin subsequently conceded that payments would still be possible, but that Gazprombank would be responsible for the exchange into roubles.

Economics Minister Robert Habeck underlines that there are currently no supply bottlenecks, but that precautionary measures must be increased in order to be prepared for a supply stop (source: Montel).

Therefore, in the first phase (early warning stage), a team of experts has been set up to regularly assess the security of gas supply. As in the second phase (alarm phase), the state does not intervene in the gas market so that the market can regulate itself.

Only in the third phase (emergency phase) does the Federal Network Agency become the “federal load distributor”. This means that it regulates the distribution of gas and therefore who has priority in the event of a shortage (source: Bloomberg).According to Article 6, private consumers, social services such as hospitals, homes or prisons, district heating plants, police and fire brigades are particularly protected. The Federal Network Agency will set criteria to decide in which order industrial companies will be taken off the gas grid. Most likely, larger companies that are relevant for the infrastructure will be given priority (source: Federal Ministry for Economic Affairs and Energy).

Tenders for wind onshore are slightly oversubscribed and what does the „EEG Easter package“ mean for future tenders?

The results of the latest round of tenders for onshore wind turbines from 01 February 2022 were published by the Federal Network Agency. Projects with a total capacity of 1,332 MW were awarded a contract. The capacity volume was slightly exceeded for the second time in a row. Apart from the six projects that were eliminated due to a formal error, the rest of the 277 bids were accepted. The manufacturer Enercon received the most subsidies with 93 turbines.

The bid values of the awarded bids range from 4.77 ct/kWh to 5.88 ct/kWh. This means that the maximum permissible value was also bid. The volume-weighted average surcharge value is 5.76 ct/kWh (source: Renewable Now).

In order to achieve the ambitious expansion targets for renewable energies, the Federal Ministry of Economics and Climate Protection presented a draft bill for the EEG reform („EEG Easter package“. It contains immediate measures that are to be implemented before Easter. Among many other changes, the tender quantities for wind onshore were drastically increased. Figure 1 shows both the tenders already carried out and the newly defined tender volumes. For the most part, these are twice as high as the originally planned tender volumes (source: Luther-Lawfirm). 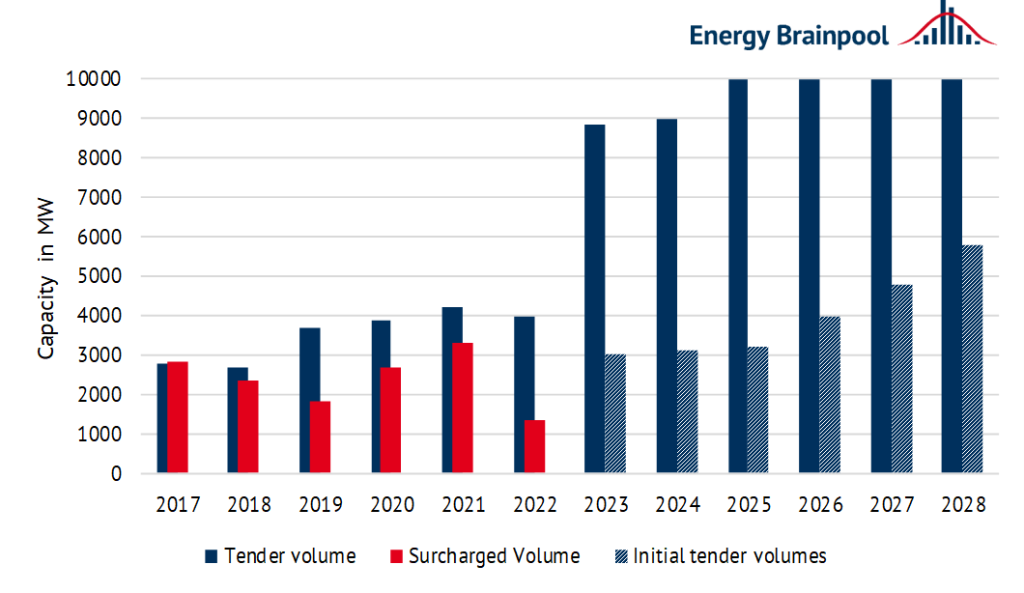 Exploding commodity prices due to the Ukraine crisis

The escalation in Ukraine has driven up prices and volatility on the futures market. Concerns about supply shortages drove gas prices high. The front month for gas on the TTF rose to a new record high of 345 EUR/MWh (source: Montel). Russian gas deliveries at the end of the month. However, averaged 3741 GWh/day and thus gas deliveries to Germany are not affected. However, low injections are expected in April. Putin’s threats keep the situation tense (source: Montel).

The coal price was driven up by lower storage levels and thus fears of supply shortages. Traders are currently trying everything possible to procure coal that does not originate from Russia in order to avoid a possible embargo. The front quarter in the API2 market reached a record USD 500/t in March (source: Montel).

The firmer energy complex, lower green power production and cooler temperatures supported power quotes. Cal 23 traded at an all-time high of 189 euros/MWh on 08 March. After losing value in the meantime, the price is currently heading for a new record high (source: energate-messenger).

In general, the Ukraine war is causing lower prices on the EUA market. The economic uncertainties are keeping participants from trading.  The CO2 price was quoted at 55 EUR/t, the lowest level since October last year (source: Montel).

The share of renewable energies in electricity generation in Germany was 43 percent in March, significantly lower than in previous years. This was mainly due to the low wind feed-in, which was 8 TWh, 30 percent less than last year. Solar feed-in, on the other hand, was unusually high over the month. Temperatures at the beginning of the month were about 3 degrees above average. The last third was characterised by lower temperatures and little wind (source: Energy-Charts).

In addition, the short-term markets reacted to the supply fears with high volatility. The day-ahead on the TTF reached a record high of 190 EUR/MWh (source: Montel). 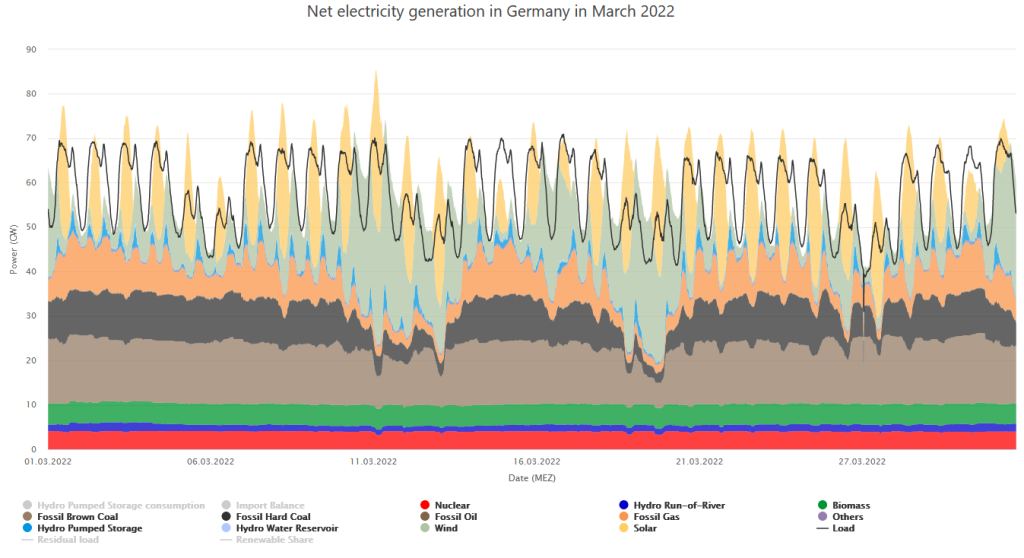 EU Energy Outlook 2050: How will the European electricity market develop over the next 30 years?