Nuclear power and natural gas in the EU taxonomy: What is it about?

The potential inclusion of nuclear power and natural gas in the EU taxonomy has again ripped open the rifts in European energy and climate policy. What exactly does the EU taxonomy regulate and what conditions are attached to classifying the two technologies as sustainable? In this article, we put the discussions surrounding the EU taxonomy in context.

As the core of the EU sustainable finance action plan, the EU taxonomy aims to do one thing above all: channel financial flows into more sustainable activities. Specifically, sustainable finance means linking financial issues and the specific needs of the European economy for the benefit of the planet and our society (source: EU Commission). As a uniform classification system, the EU taxonomy aims to define under which conditions economic activities can be declared sustainable.

Especially for large investors, banks and insurance companies, and increasingly for other companies as well, public reporting requirements apply to their activities regarding sustainability. The idea behind this: The EU taxonomy creates incentives for a sustainable transformation of the economy.

Six environmental objectives in the focus of EU taxonomy

For several years, stakeholders from various working groups and institutions at the EU level have been developing the EU taxonomy. These include, for example, the EU Joint Research Center, the Technical Expert Group and the Sustainable Finance Platform. In general, activities must be aligned with the EU’s six environmental goals to be included in the taxonomy. These goals are:

Thus, the inclusion of a technology in the EU taxonomy is a way for funders and companies to be able to declare financing or economic activity in the relevant area as sustainable. This may be associated with better private financing conditions.

Firstly, however, the taxonomy has a signal and orientation effect. In no way does the taxonomy imply general governmental or EU-wide financing or subsidies of the technologies included.

What is the deal with the inclusion of nuclear power and natural gas?

On December 31, 2021, the EU Commission sent a draft regulation to the governments of the member states. In this draft, the Commission also included nuclear power and natural gas, which have long been controversial technologies. A version of the proposals can be found here.

France, for example, has specifically advocated the inclusion of nuclear power, partly so that the French energy company EDF can invest in its power plants. Meanwhile, at the German level (depending on party affiliation), the inclusion of gas-fired power plants is preferred.

However, the “Ampelkoalition” (coalition formed by the German parties SPD, FDP and Green Party) disagrees on this. Likewise, Federal Minister of Economy and Environment Habeck rejects the current proposal. Many see the inclusion of the two forms of energy as a compromise between France and Germany.

Taxonomy and the power generation structure at EU level

In order to understand the discussion around the taxonomy in terms of the energy industry, we will now have a look at the power generation structure at the EU level. Figure 1 shows the European electricity mix for 2021 (source: Energy-Charts). 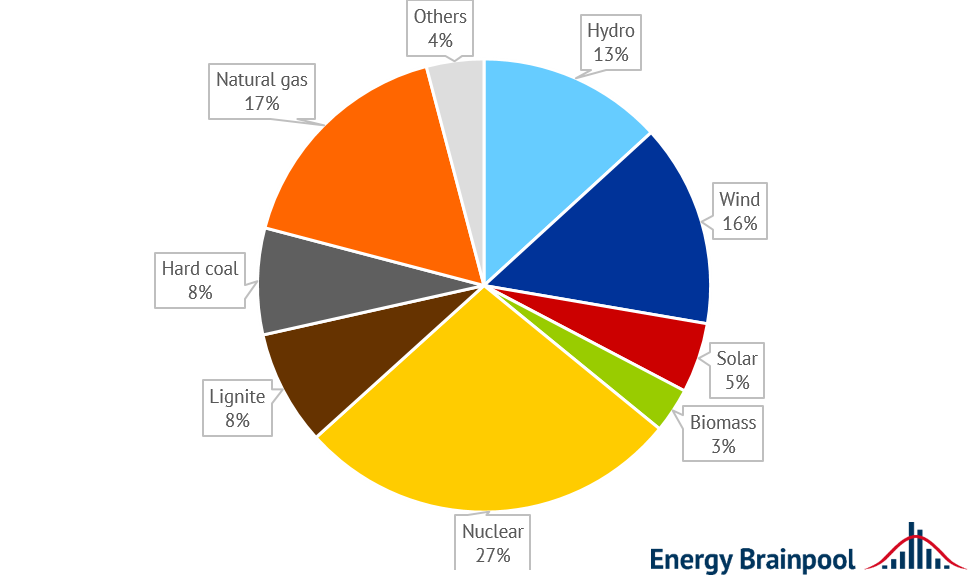 Nuclear power and natural gas have been the two technologies with the highest electricity generation at EU level for the past five years. In 2021, for example, nearly 27 percent of the EU’s electricity came from nuclear power plants and 17 percent from natural gas.

Above all, these existing dependencies of electricity generation on nuclear power and natural gas in the EU countries lead to its classification as a sustainable technology. In addition, the political balance of power contributes to this.

It is therefore not surprising that at the EU level, the technologies currently still generating the most electricity are favored in the respective countries. The inclusion of nuclear power and natural gas in the EU taxonomy would be subject to conditions.

The regulations on nuclear power

At the European level, it is important to note that many countries were already relying on nuclear power to mitigate greenhouse gases before the taxonomy. For example, expansion is planned or envisaged not only in France, but also in Romania, Bulgaria, the Netherlands, Poland and Estonia.

Figure 2 shows the share of electricity generation from nuclear power in the 13 EU countries with nuclear power plants in 2020. Clearly visible is the high share of over 30 percent in many EU member states (source: EU Commission). 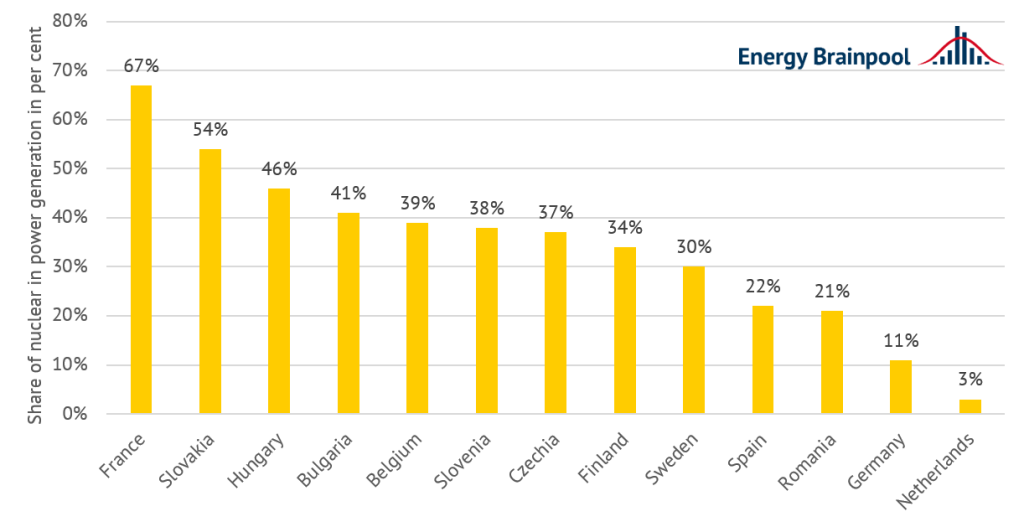 According to the EU Commission’s draft, nuclear power plants should only be sustainable if they:

The funds must have sufficient financial resources. The above conditions for classification should also apply to nuclear power plants whose operating lives are extended. Furthermore, the political level must approve continued operation until 2040.

Only nuclear power plants whose operating lives are extended after 2025 must also have a detailed plan for final disposal (source: Montel).

What applies to gas-fired power plants?

Around 17 percent of European electricity is generated from natural gas. Here, too, the differences between countries are large. Gas-fired power plants account for a particularly high share of electricity generation in Belgium, Greece, Ireland, Italy, Latvia, Lithuania, Portugal and the Netherlands – i. e. primarily in countries that do not have a high level of generation from nuclear power. 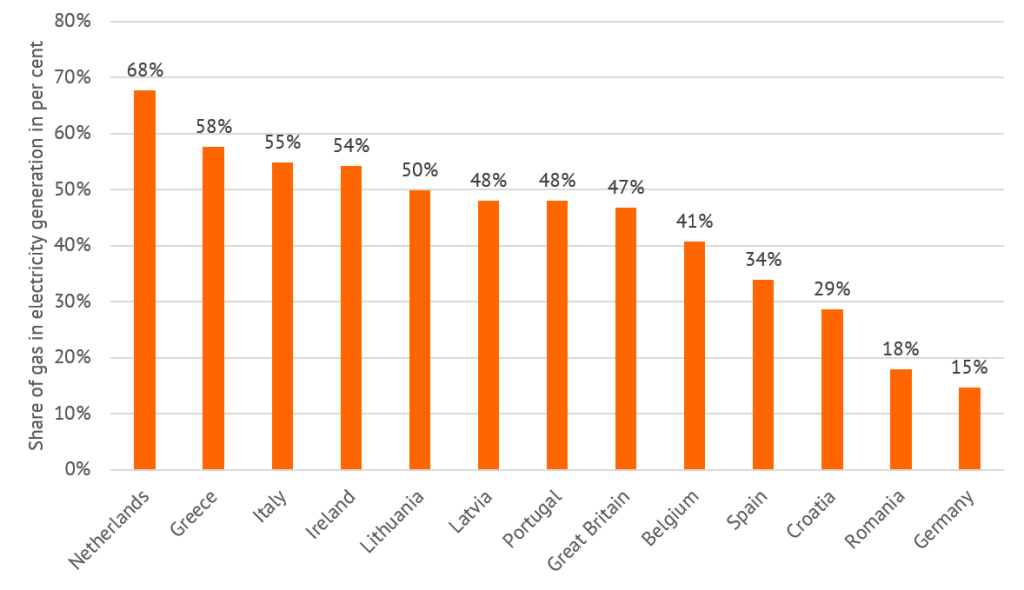 In general, gas-fired power plants must have greenhouse gas emissions less 100 g CO2/kWh. This limit would probably only be achievable with CO2 capture and storage.

Exemptions for gas-fired power plants with planning permission until 2030

Under the first path, direct greenhouse gas emissions must be below 270 g CO2/kWh for power generation. Highly efficient cogeneration plants can fulfill this condition. For normal gas and steam power plants, the value is generally between 300 and 350 g CO2/kWh.

The second option is that power plants must not emit more than an average of 550 kg CO2/kW per year over 20 years. This would mean that power plants would have to reduce the number of hours they operate per year. In addition, they would only be allowed to produce electricity during high-load phases or when generation from renewables is low. Regardless of the two options above, new gas-fired power plants that receive a permit by the end of December 2030 must demonstrate that the

What are the next steps?

Environmental associations and individual countries have already strongly criticized the new regulations. Austria even wants to file a lawsuit against the inclusion of the two energy sources in the EU taxonomy. Energy industry players doubt that enough low-CO2 or renewable fuels will be available for the gas-fired power plants (source: Montel). However, major investors and donors, through the IIGCC (Institutional Investors Group on Climate Change), have also attacked the inclusion of gas in the taxonomy in an open letter to the EU (source: Euractiv).

On a political level, the EU Commission wanted to consult the draft with the member states first by 12th of January 2022. MEPs have extended this deadline until 21st of January 2022. After that, the Commission will present the final proposal. The Council of Member States or the EU Parliament can still veto the proposal within four months before it becomes binding for all EU countries.

Conditions for a veto

For a veto, however, at least 20 EU states representing at least 65 percent of the total EU population or at least 353 MEPs in the EU Parliament must vote against the draft. At the country level, there will not be enough opposition due to the existing and continued dependence on the two energy sources (see figures 2 and 3).

On the other hand, there is greater opposition in the Parliament to the inclusion of nuclear power and natural gas. Nevertheless, given the balance of power, a veto is the most unlikely outcome. So whether the EU taxonomy will also classify nuclear power and natural gas as sustainable activities in the future has not yet been decided. However, even then, the use of the two technologies would come with some conditions.

It also remains to be seen whether the taxonomy classification will stimulate private-sector investment. Due to the high construction costs and time delays of nuclear power plants and the currently high gas prices, renewable energies could be cheaper and more profitable compared to the two alternatives.

In line with this, we recommend our live online training on 16 and 17 March 2022: The European CO2 market: Insights and outlooks. You can either attend the open seminar in German or book as an inhouse training in English.