All in all, the total new electricity generation in China in 2019 was 330 TWh. Renewable energies dominated the new generation. China is still at the forefront of selling electric vehicles.

The entire new electricity generation in China during 2019 amounted to 330 TWh. Renewables in China made up a larger part of the additional generation in 2019 than new generation from coal. Besides that sales of electric vehicles slowed down slightly compared to the year before. However, Chinese sales still make up more than half of the global in 2019.

New generation from renewables higher than from coal

With the preliminary data of the Chinese electricity system 2019 being available at China Energy Portal, we shed some light on the ongoing changes of China´s energy system transformation. The share of thermal generation (more than 90 per cent of which is coal) fell to below 70 per cent the first time as figure 1 shows. 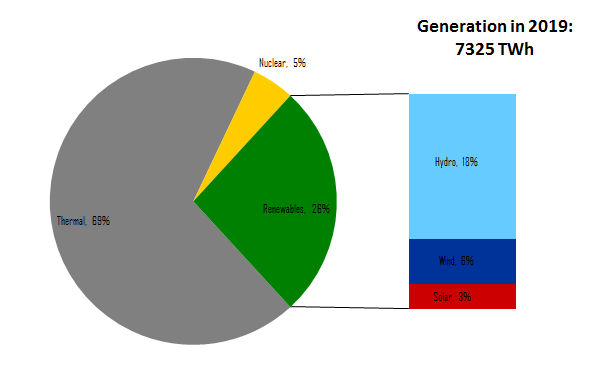 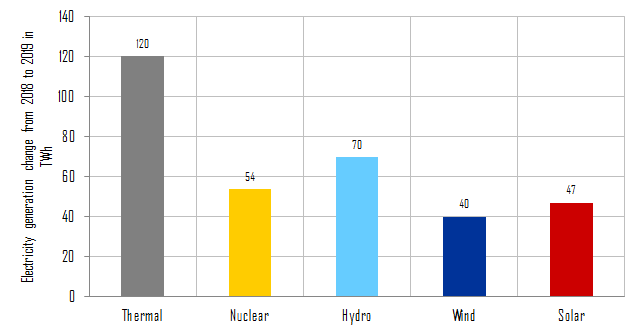 Clearly thermal and hydro generation grew from a high base, while the new electricity generation from wind and solar are far greater on a percentage basis. With an increase of almost 20 per cent generation from nuclear also grew considerably during 2019. Figure 3 exemplifies this. 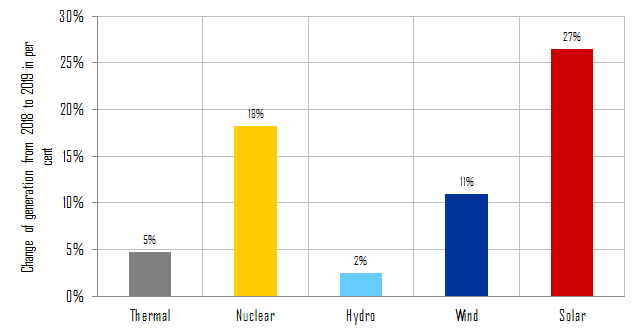 Renewable capacities grow slower than before 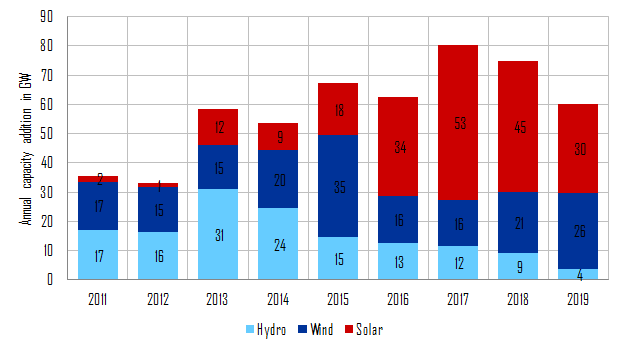 In 2019 “only” 30 GW of new solar power plants were installed in the East Asian country. This was due to the fact that supporting policies for solar PV have been decreased. A more detailed analysis of the policy changes can be found in this article.

On the other hand more of the generation from solar and wind is being used. The curtailment of renewables reached a record low in 2019 and is down from its high levels of more than 10 per cent during 2016 and 2017. Last year less than 17 TWh of wind generation and less than 5 TWh of solar generation have been curtailed (source: China Energy Portal). This brought the curtailment rates to 4 and 2 per cent of annual generation, respectively. Figure 5 makes this decline visible. 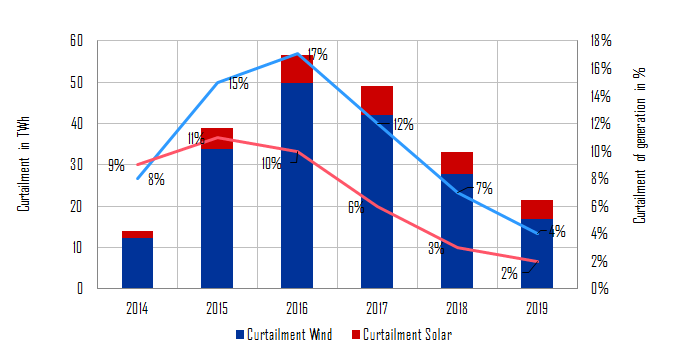 Figure 5: curtailment of wind and solar generation (blue: wind, red: solar) from 2014 to 2019 in China in TWh and per cent (source: Energy Brainpool)

It seems that China’s government still wants to continue to support buyers of electric vehicles. Last year the government signalled that the financial support might not be continued from 2020 onwards. With lower sales during 2019 however policy makers want to revive the electric vehicle market and thereby also further enable Chinese automakers to improve their vehicle portfolios (source: Electrive).

While renewable generation grew further in 2019, so did demand. Thus renewables in China still contribute about 26 per cent of total electricity generation. The impacts of the changes to the renewable support programmes in 2019 will come more to the fore during 2020 and 2021, when projects under the old systems slowly are being finalised.

In addition, 2020 will also be important as the 14th Five-Year-Plan is being drafted until the end of the year. The content of this most important high-level policy plan of China might also determine the future targets of renewable capacity additions (source: China Dialogue).

In summary, the targets for 2020 have indeed already exceeded by hydro and solar in 2019, while some 14 TWh of wind generation still has to be added this year to reach all the renewable goals.

Connections and consequences of the corona pandemic on the energy market