Last year was again a good year in terms of PV expansion in China with now 175 GW. However, also total electricity consumption grew pronouncedly by 540 TWh offsetting gains in the renewable part of the generation mix, while generation from thermal fossil-fueled power plants increased as well. LNG to play a central role to cover China`s gas consumption in the future.

Figure 1 depicts the development of the capacities of those three renewable sources in China since 2010 along with the country’s goals of installed capacity by the end of 2020. 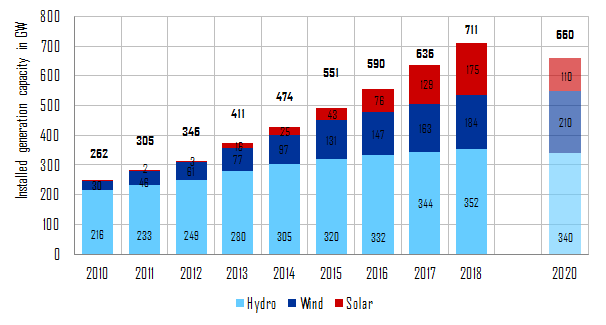 Figure 1: Capacity development of hydro, wind and solar in China, along with capacity goals in 2020 (source: China Energy Portal)

Clearly, the goal for installed capacity of PV and hydro as laid out in the 13th Five-Year-Plan has already been topped. Therefore new goals are under consideration raising the PV target to about 250 GW by 2020 (source: PV magazine).

While the expansion of renewables clearly is still underway, 2018 shows a steep increase in thermal generation. Thermal generation (coal and gas) consists about 90 to 95 per cent of coal, the rest is gas. The generation mix of 2018 in percentages (Figure 2) remained the same as in 2017, as strong demand had to be made up by increases in all generation technologies. Total generation increased by about 550 TWh compared to 2017. 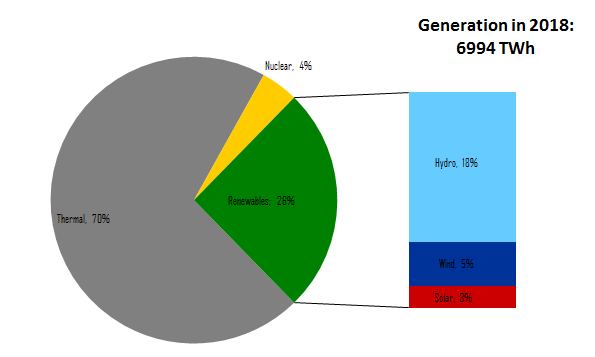 Figure 2: Generation mix in China in 2018 (note: Biomass generation is not included here, as no data is available, but should be in the order of 1 per cent of total generation)

Year-on-year increases for the different technologies are depicted in figures 3 and 4, where the strong rise of thermal generation is obvious. Solar growth of more than 50 per cent is still tremendous, while also the increase of 20 per cent compared to 2017 generation figures of nuclear and wind are not to be dismissed (source: China Energy Portal). 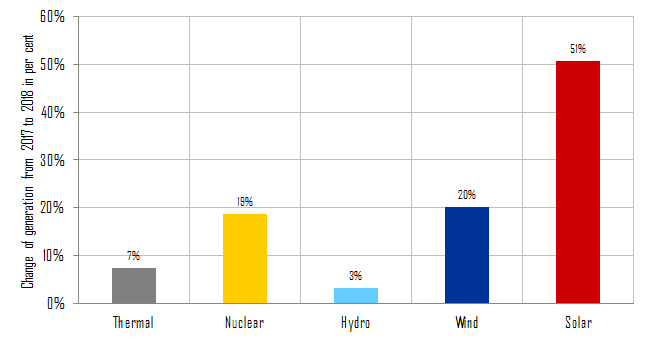 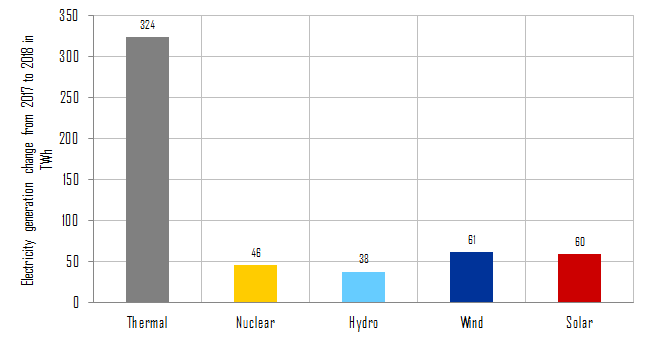 Even though these numbers are not yet the final ones and later updates might slightly change them, the direction in 2018 was clear. Increases in electricity consumption were mainly provided by an increase in thermal generation.

Chinese consumption grew by a bit roughly 540 TWh to 6845 TWh in 2018. This increase over 2017 compares to almost total German electricity consumption of 600 TWh in 2018, indicating the huge scale of China’s energy system and its hunger for electricity as larger parts of the population enjoy better living conditions. However as figure 5 shows, the main consumer of electricity in the East Asian country is the industry with about 4800 TWh last year (source: China Energy Portal). In the last years however, also the consumption in the tertiary sector and in households increased. 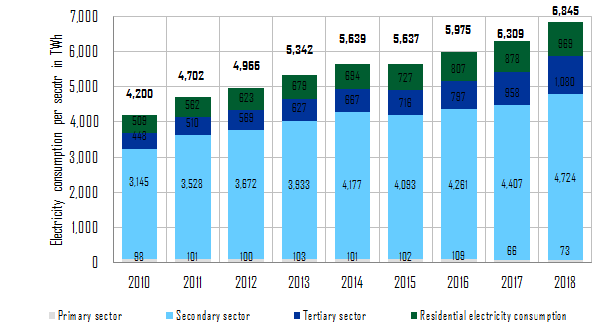 Figure 5: Electricity consumption according to sector in China from 2010 to 2018 (source: China Energy Portal)

Subsidy-free renewable energy projects are being promoted by the National Development and Reform Commission (NDRC), as backlog costs of about CNY 120 bl. (EUR 15.6 bl.) are still to be paid in forms of subsidy to renewable project developers. The new subsidy-free projects are thus to reduce the burden of payment from the government to project developers, while the NDRC notes that “some regions with good natural resources and firm demand have already achieved subsidy-free, or grid parity price conditions” (source: Reuters). The new policy encourages the grid companies to purchase electricity from pilot projects, similar to PPAs, while offering lower transmission fees and support the transport of renewable electricity across the large country via ultra-high voltage lines (source: China Energy Portal).

Another record has been set by China’s import of natural gas. The country became the biggest importer of gas globally, with about 50 bn m3 imported via pipelines and 73 bn m3 imported via LNG. Since 2017, China is also the second-largest LNG importer after Japan and ahead of South Korea. Total gas consumption in 2018 stood at about 275 bn m3 last year (source: Natural Gas World). As a comparison, German used about 90 bn m3 of gas in 2018. Also for the coming years, China is poised to import more gas via its LNG terminals, which are to reach a capacity of 110 bn m3 per year in 2021 and up to 336 bn m3 year in 2035 (sources: Hellenics Shipping, Natural Gas World).

Due to the current sentiments about economic activity in China and the trade war between the US and China, 2019 might be a year where energy consumption increases only slightly. It also remains to be seen how strong further expansion of renewables will be during this year due to further policy changes.