During the first half of 2019, Chinese electricity consumption is up 5 percent reaching 3400 TWh. Renewables generated almost 900 TWh of the electricity consumption, thus raising their share to more than 26 percent. The transition of the subsidy scheme and the government’s push for grid-parity solar and renewable auctions instead of feed-in tariffs is however still ongoing.

Growing demand in the service industry, as well as in households were strong drivers for this growth. On the generation side, the additional demand was met by increased generation from non-carbon sources, particularly hydro, nuclear and wind. Figure 1 depicts the year-on-year growth of electricity generation for the first six months in 2019 in TWh (source: China Energy Portal).

Renewables provided a total of 888 TWh bringing their share in electricity consumption above 26 percent, while including nuclear into this calculation leads to a share of 27 per cent. Moreover, hydro generation dominated the renewables with 514 TWh. Further, wind generated 214.5 TWh, while solar and biomass stood at 107 and 53 TWh, respectively.

This increased generation from renewables in the first half of 2019 was due to weather conditions for hydro and increased capacity expansion for the other renewable sources. In other words, wind capacity additions were about 9 GW, while for solar PV 11.4 GW have been installed during the first six months of 2019.

The central government’s decision to halt ground-mounted PV projects from June 2018 onwards, as well as to lower the feed-in tariff served as a break to increased PV expansion in China. Therefore, only certain projects were still approved, while the government aimed at reducing the outstanding payments to PV projects (source: PV Magazine). Since last year, the industry has been eagerly awaiting the new subsidy schemes for the world’s largest solar market.

While the generation from former renewables projects under the feed-in tariff have often been curtailed by the grid operator, the new regulations aim to counter that. Basically, for PV there are two different subsidy schemes in place now, the former feed-in tariff system, capped at an annual subsidy of RMB 30 bn (USD 445 ml) for 2019 and non-subsidised, i.e. grid-parity projects.

For some projects, in particular wind power, but also PV for poverty alleviation the old feed-in tariff system is still valid and it will be financed from another budget than the remaining and new PV projects (source: PV Magazine). For other subsidised PV projects, such as residential rooftop or utility-scale, different budgets have been allocated out of the RMB 30 bn. Those projects have to participate in auctions to win a subsidy from the pool of funds, where the lowest bidding projects will be winners (source: PV Magazine).

The first auction under this new scheme from July 2019 resulted in an average subsidy below the guiding price, i.e. the current feed-in tariffs. Figure 2 depicts the merit-order of the first auction (source: China Energy Portal). The total tendered capacity was 22.8 GW.

The non-subsidised or grid-parity projects are the second category and are not subject to any capacity quota, except in specific regions, where solar curtailment prevails. Instead of having financial support, those grid-parity project should be politically supported by local governments and have preferred access to the local grid. Those new grid-parity projects are supposed to finance themselves completely from selling the generated electricity to the grid operator or through the different electricity markets currently being implemented throughout China.

The first data suggests, that the grid-parity projects will only come online from 2020 to 2023 (source: China Energy Portal). The National Energy Administration and the National Development and Reform Commission revealed the plans for the first batch of almost 15 GW solar and 4.5 GW wind power projects in May 2019 (source: PV Magazine). As has been forecast, projects are mainly concentrated in provinces and regions with higher electricity demand and prices. Figure 3 and 4 show the capacity of the first batch of grid-parity projects for wind and solar per Chinese province (source: China Energy Portal). 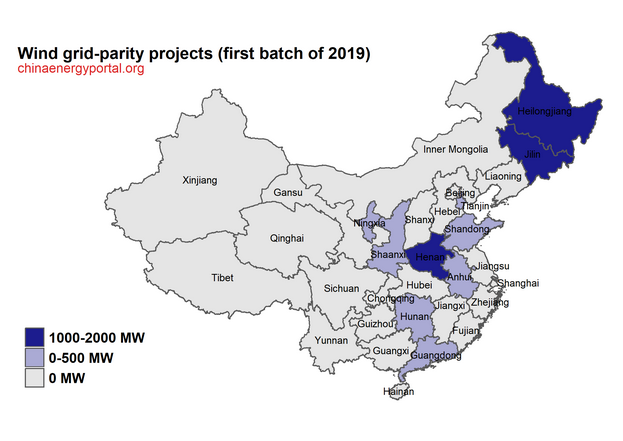 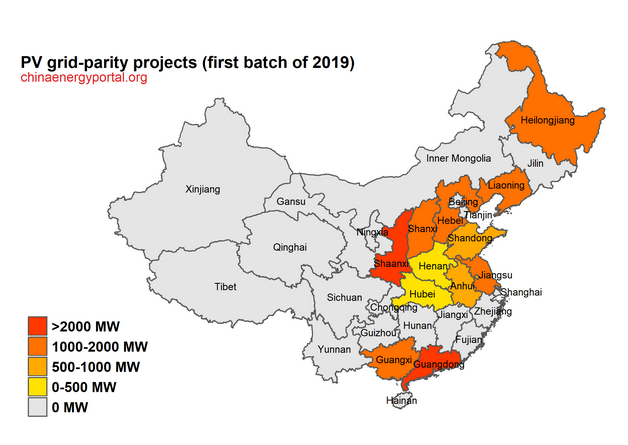 China’s new rules around renewable energy, be it the auctioning scheme or the grid-parity projects, has lowered the expectations about its solar PV expansion in the coming years. Lower growth rates of about 20 to 30 per cent and an annual expansion of 30 to 40 GW are more likely until the new policies have settled in (source: PV Magazine). Lower installations figures in China, might however mean lower PV prices across the globe and thus increasing installations in other parts of the world.

EU Energy Outlook 2050 – how will Europe evolve over the next 30 years?