The fact that the expansion of wind power in Germany struggles is shown by the results of the tender of August 2019. Meanwhile, e-mobility is making inroads in Germany. A law for supporting the structural change for the coal region is formulated and only needs to be passed. Besides that prices on the futures market in August 2019 were pointing downwards.

As already highlighted in another article, wind energy in Germany is facing its worst year since the start of the expansion of renewable energies. The last call for tenders on 1 August 2019 did not alleviate the problems either.

Only 208 MW of 650 MW were awarded. Thus the tender was undersubscribed by more than two thirds. According to the Federal Network Agency, the bid prices were also at the upper end of the permissible maximum price. More precisely, the weighted average price of all projects awarded fell to the limit of 6.2 ct/kWh set by the authority for 2019 (source: Federal Network Agency).

The August invitation to tender thus brought even higher prices than the tender of May 2019. At the same time fewer new wind capacities were awarded. Figure 1 shows the average bidding values for wind energy tenders in Germany since the start of the auctions in 2017. 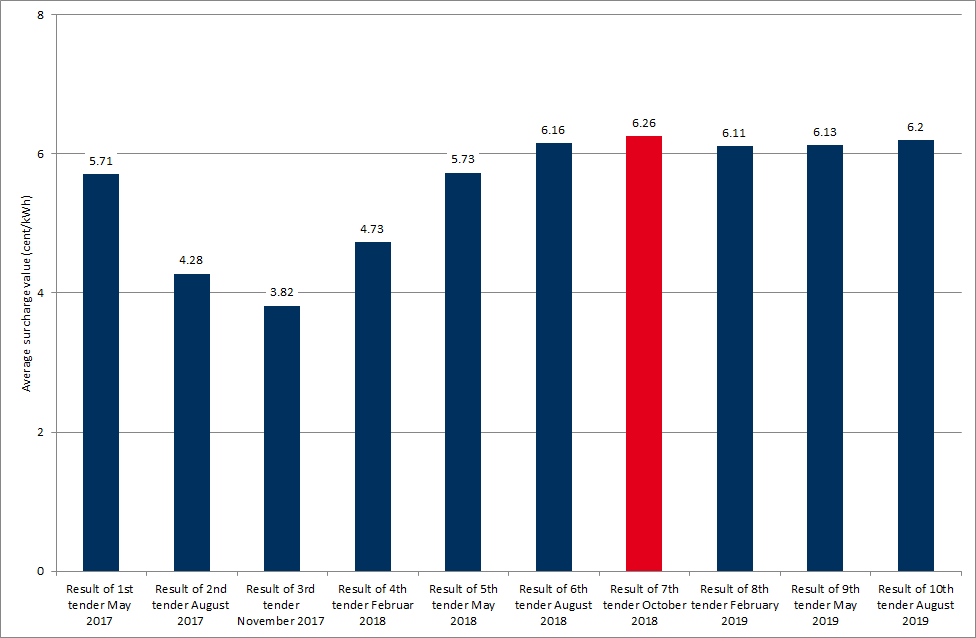 From the figure 1 it becomes clear that the tender design did not result in the desired sustainable price reduction. However, this is not only due to the tender design, but also due to the above-mentioned expansion stop. In particular it results from long approval procedures or moratoria on the expansion of wind power in the federal states (source: Erneuerbare Energien). Since around 10 GW of wind power projects are still in the process of being approved, the incentives for project planners to enter the current tenders with new wind power plants are low.

It is therefore no coincidence that calls are being made for changes in the licensing practice for rotating radio beacons operated by German Air Traffic C0ntrol (source: Erneuerbare Energien) or for restrictive distance regulations (source: Montel). Therefore Minister for Economic Affairs Altmaier has convened a wind power summit on 5 September 2019. The goal is to find solutions to the expansion problems for wind energy (source: Erneuerbare Energien).

Half-year statistics of e-mobility in Germany

Following our series on e-mobility in Germany this year, the 2019 half-yearly report shows far more public charging points. According to BDEW, the number rose by 50 percent from 13,500 to over 20,600 charging points. The energy industry operates 75 percent of these. In the case of private charging stations, however, it still has to be ensured that every tenant or apartment owner can install a charging device. In other words the majority of charging processes take place at home or at the workplace (source: Montel).

The number of e-cars on German roads has also risen sharply. In detail: The number of new registrations of hybrid vehicles, for example, rose by 70 percent in a half-year comparison, and that of purely battery-electric vehicles by as much as 80 percent (source: Montel).

Benefits granted by the employer

In order to promote electric mobility more strongly, the German government has passed a package of laws. The discount already granted today on the taxation of electric and hybrid company cars of 0.5 percent of the selling price will be extended until 2030. Until that year the electricity that drivers of electric cars use free of charge from their employers will also remain tax-free.

The extension of these discounts brings more planning security and could bring more electric vehicles into the used car market (source: E&M). Tax benefits for electric bikes will also be extended until 2030. Trade and logistics companies should also benefit from the package.

From 2020, for example, they will be able to claim 50 percent of the purchase price of an electrically powered delivery vehicle as special depreciation. This regulation will also apply until 2030. Not to forget: Tickets provided by the employer for bus and train commuters are also completely tax-free (source: PV Magazine).

The package of measures can also be found on the website of the Ministry of Finance.

Fast tracking the support of structural change in coal regions

On 22 August 2019, the Federal Ministry of Economics presented a 54-page draft of the “Coal Regions Structural Support Act”. However, the Ministry only gave 24 hours to the associations and federal states to submit their comments on the draft.

Subsequently, the draft was put to the vote by the ministries and was adopted by the Federal Cabinet on 28 August 2019 (source: PV Magazine). The hurry and shortage of time was certainly also due to the elections in the most affected federal states of Brandenburg and Saxony, which took place on 1 September 2019.

In terms of content, there was no big news, as the key points of the draft law had already been presented in May. The affected regions are to receive 14 billion euros, with 43 percent flowing into the Lausitz coal region, 37 percent into the Rhineland coal region and 20 percent into the Central German coal region. Furthermore, the sum is to go to the affected regions during three funding periods – 2020 to 2026, 2027 to 2032 and 2033 to 2038 (source: PV Magazine).

The decision-making power over the use of these funds lies with the federal states. However, they should invest primarily in strengthening the infrastructure. Details are to be laid down in an administrative agreement between the federal government and the “lignite” states. However, the draft law does not formulate a mandate for the greater expansion of renewable energies with federal funds, criticises Greenpeace Energy among others (source: Erneuerbare Energien).

A further 26 billion euros are to flow from federal projects to the affected regions. In particular, facilities for research and development in the regions are to be rebuilt and set up. Article 4 and Paragraph 6 of Article 1 of the draft are likely to be a downer for the coal-producing federal states. It states: The “Coal Regions Structural Support Act” is to enter into force one day after the announcement of the Coal Exit Act and thus after a final legally regulated shutdown agreement.

In addition, the financial aid for support periods 2 and 3 will only flow if the decommissioning of the lignite plants has taken place in accordance with the Coal Exit Act. These passages now also increase the pressure on the operators of the power plants and should greatly reduce the interest of the affected federal states to delay the coal phase-out law (source: Energate).

August brought price declines in all commodities, especially CO2-certificates and coal. Accordingly, the German front year base-load decreased by 2 EUR/MWh to about 48 EUR/MWh by the end of August. The fear of a further escalating trade war between the US and China, a still uncertain situation between the US and Iran, as well as the gloomy economic outlook in Germany have had an impact on traders (source: Montel).

During August, the price of CO2-certificates in the EU ETS fell by almost 17 percent from almost 30 EUR/tonne to 25 EUR/tonne only gaining again during the last days of the month.

Figure 2 shows the price development of the German front year base-load, the CO2-certificates for December 2020, and the front year for hard coal during August 2019.

On the spot market, a strong wind front from 10 to 12 August reduced both fossil and nuclear power generation. That weekend also saw negative electricity prices as low as -50 EUR/MWh. On average, electricity generation from gas was more than twice as much as from hard coal. In contrast to that wind and PV each generated just below 6 TWh. Figure 3 shows the structure of German electricity generation and day-ahead prices for August 2019.