2. May 2019 / Simon Göß / Comments Off on PV tops Wind – an analysis of the German renewable energy expansion in the first five months of 2019
Analysis: Energy Policy, Prices, Regulation

At just above 1800 MW, the first five months of 2019 saw the strongest PV expansion in more than five years. The total installed capacity at the end of May was 47.7 GW. After the new installations of onshore wind energy already declined in 2018, the first quarter of 2019 saw the lowest expansion in more than 20 years. During this period, wind turbines with a total capacity of only 206 MW were reported as having been commissioned. This article examines the reasons for the different expansion of these important renewable energy sources in the first five months of 2019.

Fluctuations in the expansion of renewable energies are nothing new. Since the beginning of the promotion of PV and wind, there have been years in which many new power plants were connected to the grid. But there were also years in which the expansion stagnated or declined. Figure 1 shows the annual installed capacities of PV and onshore wind in Germany since 2005 until May 2019 (data sources: Solarbranche, Windbranche, BNetzA). 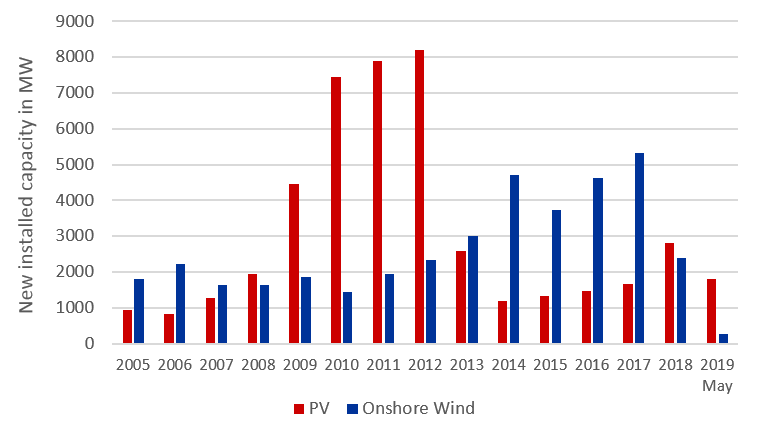 Figure 1: annual newly installed capacity of PV and onshore wind since 2005 until May 2019 in MW (source: Energy Brainpool)

The boom period for new PV installations was between 2009 and 2012, while new installations declined drastically in the following years. In contrast, the strongest new installations in onshore wind energy ranged in the years from 2014 to 2017. Changes in the subsidy regime as well as price reductions on the manufacturer side were decisive for the ups and downs of the expansion of renewable energies.

Expansion since the beginning of 2019

The latest figures for the gross expansion of PV and wind energy come from the Federal Network Agency. In its market data register, the authority determines the newly installed capacity of PV and onshore wind (source: BNetzA). Accordingly, the strong PV increase of 1814 MW and the weak onshore wind increase of 206 MW in the first five months of 2019 can be broken down as shown in Figure 2. 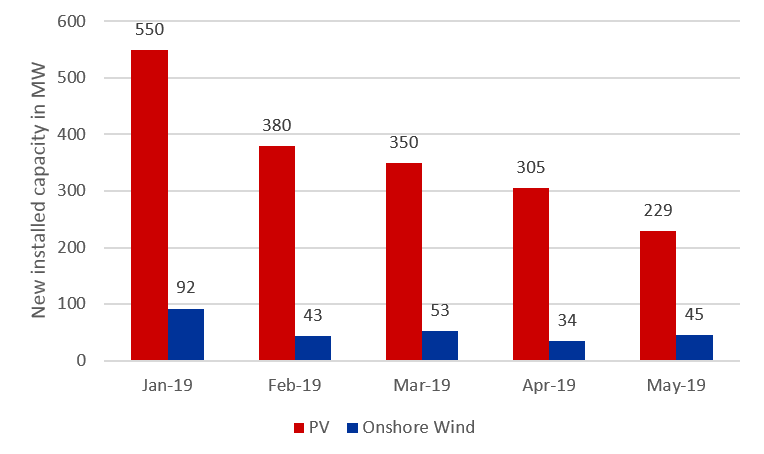 Since the beginning of 2019, solar systems that have been installed where mainly systems outside the EEG (renewable energy law) tenders. PV plants that do not have to participate in tenders accounted for over 90 percent of all installations. These were all plants with an output of less than 750 kW.

Roof-mounted systems were the top priority

The data from the Federal Network Agency also indicate that the majority of newly installed PV systems were roof-mounted systems in 2019. The installation of new PV-for-tenants-systems in the first five months was 5.3 MW and is far below the annual permitted quantity in this segment of 500 MW. PV-for-tenants as a boost for PV expansion is therefore negligible.

In the wind energy sector, 71 wind turbines were commissioned until the end of May 2019. In addition to the 206 MW for onshore turbines, 33 new offshore turbines with an output of 210 MW were connected to the grid in the first five months of this year. During the same time, 52 MW of wind capacity went offline, leaving the net expansion at only 154 MW by the end of may 2019 (source: personal contact with FA Wind). The slump in the expansion of onshore wind power is dramatic. This is also illustrated by the comparison with the commissioning figures of the first five months for the past three years in Figure 3 (Source: FA Wind, BNetzA). 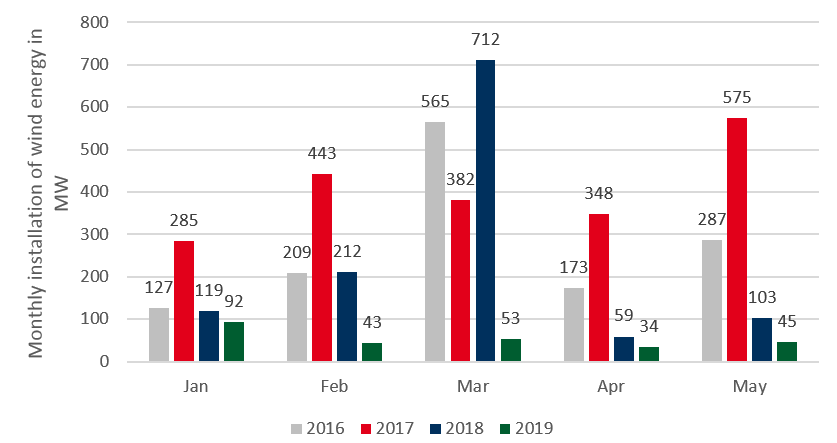 While new commissioning in the same period of the previous year was around 1200 MW, the year 2019 is 80 to 90 percent below these figures.

Why have PV and wind been added differently since 2018?

To answer this question, it is necessary to look back into the past. Since the EEG 2017, the expansion of wind energy has been capped at almost 3000 MW per year via the tendered quantities. Furthermore, so-called citizen wind farms have been preferred by the tender design. They were able to enter the tenders without an immission control permit. Now, they do have to apply for the permit in order to start construction.

By April 2019, for example, only 167 MW of the 2688 MW citizen wind turbines from the tenders in 2017 had received this permit. The construction and commissioning of these citizen wind farms may, however, be postponed until the early 2020s due to statutory regulations on implementation periods. According to the Fachagentur Wind, only 35 of the 713 wind turbines from the 2017 tenders are in operation. Numerous lawsuits against wind farms are also delaying many projects.

Delay due to litigation

In December 2018, more than 750 MW of wind energy projects were affected by lawsuits (source: FA Wind) and more than 10000 MW of wind energy capacity is stuck in the general approval and permission procedures. The expectation of renewable and wind energy associations for the new installations in 2019 is correspondingly low: about 2000 MW, the lowest level since 2011 (source: Bizz Energy).

The increased expansion of PV has other reasons, but is also due to legal regulations. With the resolution of a new law combining several aspects of Germany´s energy landscape in December 2018, not only special tenders for PV and wind were made possible, but there were also reductions in remuneration for in PV power plants that do not have to participate in the tenders (source: PV Magazine). The reduction in the remuneration rates for roof systems is shown in Table 1 (source: BNetzA).

For PV plants with an output between 100 and 750 kW, it was therefore clear at the end of 2018 that the remuneration rates would fall by 15 percent by April. This is an important reason for the increased expansion of PV in the first months of 2019. The lower prices for PV systems and components are also helping the current trend towards more PV (source: PV Magazine). However, the Energy Collection Act has reduced the annual PV expansion target from 2500 to 1900 MW.

Several institutes estimate that it will be necessary to expand PV systems by around 5 GW per year in order to achieve the German 65 % target for the share of renewable energies in gross electricity consumption in 2030. In particular to dampen the dismantling of old plants, the expansion of wind energy also requires an annual increase of at least 4 GW. The phasing out of coal and the CO2-reduction targets also necessitated increased additional capacity (source: Montel, Agora Energiewende).

Therefore, the figures from the first months of 2019 should serve as a warning signal. According to the current situation, only about half of the necessary annual renewable expansion will be achieved.