Liquefied natural gas (LNG) is on the way to enable a global gas market with growing consumption and trade during 2018. The largest regional market for the LNG is Asia, especially Japan, China and South Korea.
Increasingly, Europe also seeks to diversify its gas supply and LNG import terminals are being upgraded or constructed. This article covers the most important developments and trends in today´s LNG markets.

Natural gas can be liquified and subsequently shipped over long distances, opening up new markets, where pipelines are not economical or possible to build. Thus LNG enables bridging of gas markets and opens up new relationships between gas suppliers and consumers on a global scale. We already discussed this topic in another article.

LNG now represents about 10 percent of global gas supply according to the 2018 World LNG Report by the International Gas Union. The major LNG shipping routes of 2017 are depicted in figure 1. 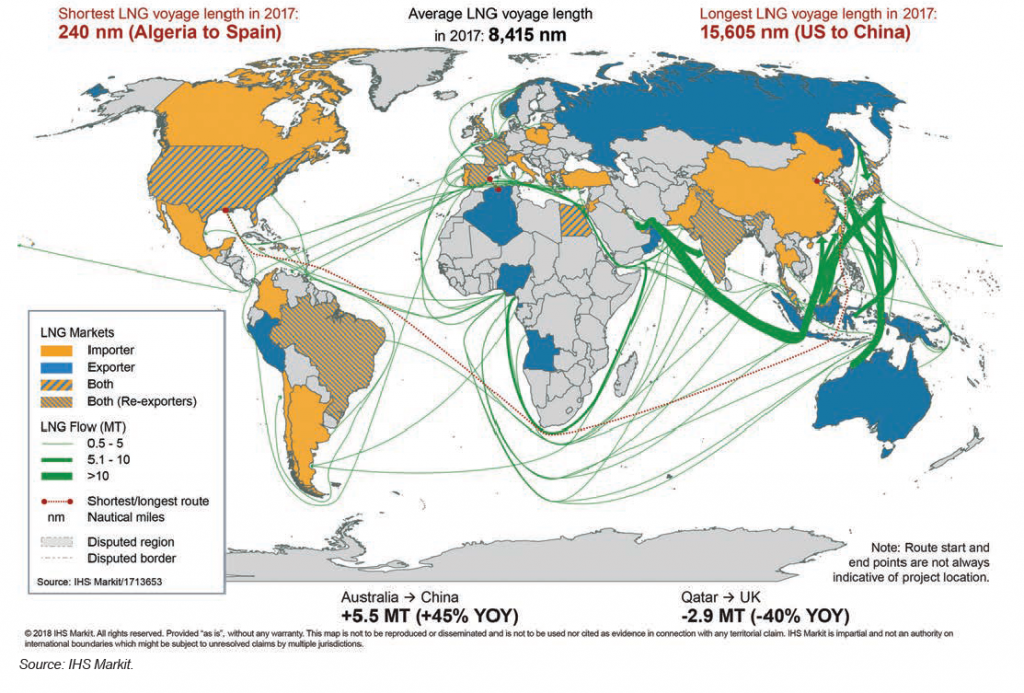 The large regional market of Asia is clearly visible due to the high LNG flows compared to the European or American markets.

In 2010, global LNG trade stood at 220 million tonnes (MT), equating to about 286 billion cubic meter (bcm). In the remainder, MT will be the primary unit used, where the conversion factor between MT LNG to bcm natural gas is 1.3.

Depending on the heating value of the gas used for liquefaction, this factor varies between 1.3 and 1.36. Since 2010 LNG trade has increased by 100 MT and brought total trade to 319 MT in 2018. For comparison: Global LNG consumption in 2018 thus amounted to about 4.5 times total German gas demand.

About two-thirds of global exports come from Qatar, Australia, Malaysia, Nigeria and Indonesia, while US LNG shipments are about to drastically rise according to forecasts of EIA and make the country one of the biggest exporters of LNG in the coming years (source: Forbes).

The largest importers are Japan, China, South Korea, India, Taiwan and Spain combining roughly 70 per cent of global imports. The most significant growth in demand since 2017 has been in China, which grew its LNG demand by almost 13 MT in 2017 and 16 MT in 2018.

With total imports of 55 MT in 2018, China pushed ahead of South Korea to become second-largest LNG import market after Japan (source: IGU).

Chinese demand is seen to be rising further, due to stricter air quality rules in its cities and the country`s plans for lower carbon emissions in its electricity sector and district heating networks.

In 2018 more than 50 percent of China`s growth in gas supply came from LNG. Imports to India are also supposed to be on the rise, at least according to Shell`s LNG Outlook 2019.

Figure 2 depicts the regasification capacities of the two countries from 2018 through 2022. Whereas a doubling of capacity is being anticipated.

Figure 2: regasification capacities for LNG in China and India from 2018 to 2022 in MT (source: Shell)

Another potential demand for LNG comes from a generally overlooked segment of global supply chains, the shipping sector. With new rules of the International Maritime Organization sulphur content in marine fuels has to be cut to 0.5 per cent down from 3.5 per cent by 2020.

This step will have repercussions in the shipping industry along the supply chain of vessels and engines.

Experts suggest either scrappers to filter out sulphur from normal heavy-shipping fuel, LNG-powered ships, electric drives and even sails assisting trade around the globe as cost-effective solutions. Imperial College`s report “Can natural gas reduce emissions from transport?” provides an interesting read in this regard.

With about 130 additional LNG ships being on order at major shipyards global shipping might well be a reason for further demand (source: Natural Gas World).

With US-exports of LNG posed to grow, Asian markets’ growing demand for LNG, where is Europe left? How much LNG can the continent`s markets absorb given cheap, while politically charged, imports via pipelines from Russia?

Imports of LNG to Europe come mainly via Spain, France, Italy and the UK and make up 14 percent of gas imports from outside the EU. In 2017 the imported amount stood at 55 bcm or 42 MT, while 2018 saw imports of about 50 MT already (source: Montel).

Figure 3 displays the main European LNG importers according to 2017 data. 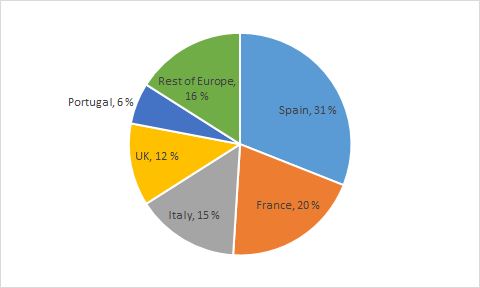 Figure 3: Top LNG importers in the EU in 2017 in per cent of total LNG imports (source: EU-Commission)

The biggest supplier is Qatar with 40 percent, followed by Nigeria and Algeria with 19 and 17 per cent, respectively (source: EU Commission).

However, things are changing. The European gas exchange Powernext wants to introduce LNG-contracts from July 2019 onwards in order to do justice to the energy carrier´s growing importance (source: Montel).

Also other companies see an increasing role of LNG in Europe, such as Swiss Axpo or US LNG-exporter Cheniere, which are already active in the market (source: Montel, Montel).

With Poland aiming to diversify its gas supply, LNG is to make up 37 per cent of gas consumption by 2040. Gas imports from Russia go down to zero after 2022, as Poland does not want to continue its supply contract with Gazprom.

The Swinoujscie LNG regasification plant is being expanded from 3.6 MT to 7.5 MT, being able to cover about half of the country`s domestic gas consumption.

Although plans for LNG import terminals in Germany have been on the table for quite some time, political support only seems to be gathering steam very recently (source: Montel).

Minister of Economics Affairs and Energy, Altmaier, supported the idea of two German regasification terminals, either at Brunsbüttel (more than 6 MT of capacity), Wilhelmshaven (7.7 MT of capacity) or Stade (source: Montel).

Especially lower gas production in the Netherlands and the coal-exit plan might have swung political clout towards LNG in Europe`s largest energy consumer.

Accordingly, the Ministry wants to change the regulations and make the pipeline connection to LNG regasification compulsory for pipeline operators in Germany (source: Montel).

Global, but also regional LNG markets appear to be increasingly in the centre of diversification strategies of national governments.

It remains to be seen, if availability of LNG supply is able to keep up with higher demand and if LNG prices along the complex value-chain are able to outperform traditional gas supply via pipeline.