For a long time natural gas has exclusively been a grid-bound energy carrier. In consequence, markets for natural were not globalized, but there were several submarkets (see Tutorial 1) which supplied themselves. Furthermore, the price level in the various markets varied as no arbitrage between the markets was possible.

In the past ten years the submarkets started to integrate due to the increasing use of liquefied natural gas (LNG). In order to transport natural gas in a liquefied form a transport chain of three elements is required:

The more LNG exporters and the more LNG importers share the market, the higher becomes the flexibility of the suppliers and of demand as well. If, for example, the European natural gas price is low, the LNG exporter can supply natural gas to Japan, where possibly higher prices can be achieved. The increasing use of LNG makes arbitrage trading possible and led to similar prices for natural gas in in different regions of the world. A little less than 20 percent of the European natural gas demand is covered by LNG imports.

Due to the relatively low energy density of LNG the transport via pipeline is expensive as soon as it comes to a long distance. This applies not only to the investment cost but also to the operating costs. The transport per ton of oil equivalent (per unit of energy) is a lot more expensive than the transport of oil or coal as it can be seen in figure 1. 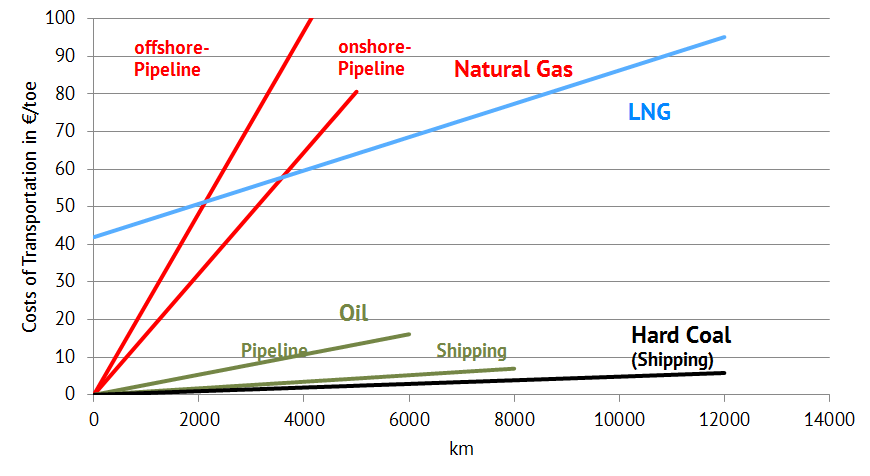 Whether the transport via LNG or via pipeline is cheaper depends on the distance between producer and consumer. In general transportation via LNG is cheaper from a distance of 2,000 to 4,000 kilometers. Still, Russian natural gas is transported via pipelines over a distance of up to 5,000 kilometers to Germany. Due to the fact that there is no access to an ice-free sea near the Siberian natural gas fields, it cannot be transported via LNG.