At the end of March 2019, the European Parliament has given green light to the last regulations and directives of the “Clean Energy Package”. Both in Berlin and in Hamburg, the re-communalisation of energy infrastructures is imminent. While renewable energies can show new records in March, the high time of storage just starts. At the long and the short end of the electricity market, prices went down in March 2019.

The regulations of the EU Commission, which became known in November 2016 as the Winter Package, have now also been passed the EU Parliament. On 26th of March 2019, 90 percent of MEPs voted in favour of the remaining four regulations. With the adoption of the Electricity Market Directive and Regulation, the Acer Regulation and the Regulation on Risk Preparedness in the Electricity Sector, the EU is taking a big step towards the goal of an “Energy Union”, said Energy and Climate Commissioner Canete (Source: EU Commission).

The rules now adopted are amongst others intended to prepare for risks to security of supply. Member states have to draw up national emergency plans for the event of bottlenecks. Beside that the Acer Regulation is intended to give more scope for the joint organisation of national regulators. Plus the Electricity Market Directive and Regulation concerns cross-border trade, price regulation and rules for capacity markets. For example, transmission system operators on interconnectors between countries are to open 70 percent of the transmission capacity for electricity trading. New rules also apply to the capacity markets.

Stricter CO2-limits are valid for the participation of power plants. New power plants operating in capacity markets are allowed to emit a maximum of 550 g/kWh, while this emission limit for existing power plants in such markets applies from 2025. In addition, capacity contracts concluded before the end of 2019 will not be affected by the new rules (source: Montel).

Figure 1 shows the state of play of the regulations and directives of the package (source: EU Commission). 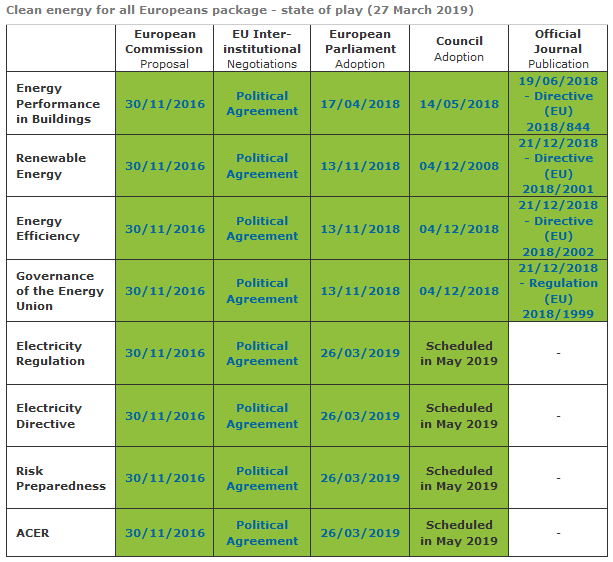 Re-communalisation in Berlin and Hamburg

Vattenfall loses the Berlin electricity grid. The Berlin Senate’s decision on 4th of March 2019 to award the operation of the German capital’s electricity grid to “Berlin Energie” marks the end of years of dispute over this important infrastructure. For the more than 36,000 kilometre long distribution grid, the new concessionaire will be the federal state company founded in 2012. The former concessionaire “Stromnetz Berlin”, a subsidiary of the Vattenfall Group, has tried to win the award procedure through several lawsuits (source: Erneuerbare Energien). This strategy did not turn out to be successful.

But it is not only Berlin. Indeed, there is a trend towards re-communalisation. Between 2005 and 2016, more than 150 new city, municipal and regional utilities were founded. This was also the case in Hamburg, where, following a referendum in 2013, the electricity and gas networks returned to the ownership of the city (source: TAZ). After four years, the takeover is now also paying off financially (source: ZfK).

However, the re-communalisation of the Hamburg district heating company, also from Vattenfall, is going less smoothly. According to a new expert opinion, the minimum price of EUR 950 million agreed five years ago might be about EUR 300 million too high. This could have an impact on the takeover plans, as the overpayment could constitute illegal aid from Hamburg to the Vattenfall Group. The purchase of the Hamburg district heating network with retroactive effect from 1st of January 2019 is currently being examined by the EU Commission. However, its decision has now been postponed from 19th of March to the end of April 2019 (source: Montel).

Batteries and power-to-gas: storage market on the rise

In the current network development plan, the transmission network operators have not only defined the expansion of their grids, but have also published plans for network optimisation. This also includes the so-called network boosters with which the TSOs want to arm themselves against disruptions in the grid. TransnetBW is planning a 500 MW battery storage facility in the Heilbronn region and a further 300 MW storage facility near Ludwigsburg. A 300 MW battery system is also to be built in Lower Saxony, while two further 100 MW storage facilities are planned, one near Munich and another near Rendsburg in Schleswig-Holstein. With 1.3 GW of capacity, the financial dimension of these projects is in the billions (source: Montel).

A market analysis commissioned by the German Energy Storage Association (Bundesverband Energiespeicher) also sees the possibility of 1 GW of installed battery storage capacity in Germany by the end of 2019. This includes 600 MW of PV home storage and almost 400 MW of large-scale storage for grid stabilisation (source: PV Magazine).

The TSOs are also active in the power-to-gas sector. Amprion announced that the company is planning to build a 100 MW power-to-gas plant in northwestern Germany together with the gas transmission network operator Open Grid Europe. The plant is to be commissioned by 2023 (source: Montel). These announcements are a thorn in the side of many traders and energy companies. As storage facilities might enable infrastructure operators to intervene in the competitive generation and trading sector.

More than 50 power-to-gas plants with a total electrical input capacity of more than 55 MW are currently in operation or in planning in Germany. This is the result of an evaluation by Ludwig-Bölkow-Systemtechnik. Projects in the three-digit MW range have already been announced for the beginning of the 2020s, for example by Amprion (source: PV Magazine).

A plan on a much larger scale is being developed in the Netherlands, more precisely in Rotterdam. A consortium of industry and research wants to design and build a gigawatt-sized power-to-gas plant in the port of Rotterdam. The plant is to be commissioned in the second half of the next decade to use the electricity from the planned onshore and offshore wind turbines in the Netherlands. Plus it should generate hydrogen for the coastal country’s industry. Luckily, the current cost of around EUR 1 billion for a 1 GW power-to-gas plant is expected to drop to 350 EUR/kW by then (source: PV Magazine).

Prices fall at the long end, negative prices on the spot market

The lead contract for the base load supply of electricity in Germany, calendar year 2020, fell from just under 48 EUR/MWh at the beginning of March to a 4-week low of 45 EUR/MWh on 25th of March. Reasons for the bearish mood on the futures market were the Brexit uncertainties and effects on emissions trading. Only the rising CO2 prices towards the end of March, due to technical signals, helped the front year to rebound (see Figure 2).

On the short-term market, renewable energies have temporarily depressed prices sharply and also set some records. In the week from 4th to 10th of March 2019, almost two thirds of Germany’s net electricity generation came from renewable sources, especially wind.

In the following week, renewables increased again and covered 67 per cent of Germany’s net electricity consumption. This corresponds to the share of renewable energies that Germany would like to achieve in 2030. While wind energy covered 50 per cent of the electricity consumption during these days, the share of fossil and nuclear generation fell to low values. This can also be seen in Figure 3. The high feed-in of renewable energies also came with a negative price tag. On the first three weekends, electricity prices in March 2019 were below zero for an extended amount of time. In the latter half of the month the prices were again positive due to the necessary generation of fossil power plants.