The trilogue negotiations on the Winter Package are making progress. The content of the remaining directives and regulations are to be coordinated by the end of the year. A Chinese battery factory in Thuringia is causing a sensation, while the proportion of new registrations of electric vehicles is increasing. A step forward and a step back in the balancing energy market. High spot prices and sustained bullish mood on the futures market due to heat wave.

Progress in negotiations at EU level

One of the eight provisions of the EU winter package of 2016 is currently in force: the Building Efficiency Directive. Three of the regulations from the EU Commission’s first draft of several thousand pages are to be put to the vote in the plenary session of the EU Parliament in October 2018. Afterwards the EU energy ministers have to approve. The three regulations are the Renewables, Efficiency and Governance Directives (source: Energate).

In the Renewables Directive, the EU Parliament, the EU Commission and the Council of Ministers have agreed to increase the share which renewable energies should have in Europe’s energy mix. Now renewables are to cover 32 percent of the EU’s energy requirements by 2030 instead of 27 percent. In 2016, the share was 17 percent. This means that the share of renewable energies will almost have to double in the next decade. Energy efficiency regulations have also been tightened. By 2030, 32.5 percent of energy is to be saved compared to 1990. The reason for this change was that by 2016 the EU was only two percent below its energy efficiency target for 2020. Furthermore, the EU Commission would like to review the commitments of the individual member states on the basis of national progress reports every two years. If countries are behind schedule, the EU Commission could impose binding conditions (source: Bizz Energy).

The remaining four regulations were first negotiated under the Bulgarian Presidency and will now continue to be negotiated at EU level under the leadership of Austria. The Electricity Market Design Regulation and Directive, the Regulation on risk-preparedness in the electricity sector and the Regulation on the Agency for the Cooperation of Energy Regulators (ACER) still have to be negotiated about. In particular in the regulation on electricity market design, there are points of contention that still had to be resolved. For example, the regulations on capacity mechanisms and how much CO2 reserve power plants are allowed to emit are controversial. A reconfiguration of price zones within the EU and possibly across national borders also creates ample need for discussion. Nevertheless, the Austrian Presidency would like to reach an agreement with the EU Parliament by the end of 2018 (source: Energate).

A rather unpleasant point is the complaint of the EU Commission at the Court of Justice of the European Union against the Federal Republic of Germany. The EU Commission has doubts that the Federal Network Agency can make independent decisions. In particular, the regulatory authority does not have unrestricted discretion when setting grid tariffs and other conditions for access to grids, since numerous aspects of the definition are regulated in ordinances of the Federal Government,” the accusation reads. The Federal Government, on the other hand, is of the opinion that it has complied with European standards and has implemented them appropriately in national law. They will therefore defend themselves against the accusation of breach of contract (source: IWR).

E-mobility is picking up speed

In the first half of 2018, the market for electric cars in Germany rose sharply. New registrations rose by 60 to 70 percent in the first six months of this year compared with the same period last year. However, the passenger car market was dominated by gasoline engines with two thirds of new registrations. From the beginning of January to the end of June 2018, more than 17200 electric vehicles came onto German roads and accounted for 0.9 percent of new registrations. Still, average CO2 emissions from new cars rose by 1.3% to 129.5 grams/km (source: KBA). Figure 1 shows the changes in new passenger car registrations comparing the first half of 2017 with 2018 (source: KBA). 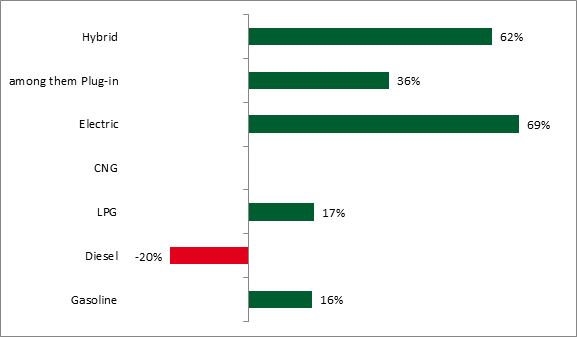 Figure 1: Change in new registrations of passenger cars in the first half of 2018 compared to 2017 by selected fuel types in percent (source: KBA)

The German Association of the Automotive Industry (VDA) also promises a roll-out of e-mobility. Over the next three years, German manufacturers will increase their range of E-models from 30 to 100 (source: VDA). A further analysis also predicts that the target of millions will be achieved in 2022. According to Horvath & Partner, the number of electric cars will rise to 200,000 this year. To achieve this, however, new registrations for hybrids and battery-powered vehicles would have to gain momentum (source: KonstruktionspraxisVogel).

There are also new developments in battery manufacturing: The Chinese battery manufacturer CATL (Contemporary Amperex Technology Co. Limited) is expected to set up battery cell production in Thuringia. With an investment volume of over 240 million euros, the factory is to become one of the largest cell production facilities in Europe with an annual production capacity of 14 GWh. It is China’s largest investment project in Germany and could simplify cell delivery to German car manufacturers (source: MDR). Also Daimler is expanding its electric mobility division with its subsidiary Mercedes-Benz Cars. Two battery assembly factories are to be expanded or built in Sindelfingen and Untertürkheim. Daimler now has a total of eight assembly factories on three continents (source: Energate).

In a further article we will report specifically on electric mobility in Germany and break down the most important developments for you.

The switch to the new mixed-price procedure for control energy tenders has been delayed for the time being. After two auctions with the new mixed price method for capacity and energy price in secondary and minute reserve on 12 July, the Higher Regional Court Düsseldorf has reinstated the old procedure with its capacity price auction. The new mixed price method will not be applied until 15th of October 2018 (source: Energate). Market participants therefore have more time for implementation. In itself, however, the Higher Regional Court of Düsseldorf did not object to the mixed-price method. Next Kraftwerke (source: ZFK), which filed the complaint against the new procedure, believes that the capacity price could now increase and thus shift the costs of control energy towards grid fees and away from the balancing group responsible parties.

Further changes are due to the Electricity Balancing Guideline. A proposal of some European TSOs provides that from 26 November 2018, the primary balancing power will be put out to be tender on a daily basis with two days-ahead, instead of on a weekly basis as previously. From 1st of July 2020, 6 time slices per day, each with a running time of 4 hours will be procured by the TSOs (source: Entso-e).

The German TSOs also want to change the quarterly determination of the demand level of control energy. To this end, a new method is to be implemented, which determines the level of demand on a weekly basis depending on the situation. The need for control power should thus be reduced, decreasing costs for the provision (source: EUWID).

Summer temperatures in July broke some electricity price records in 2018. With overall very low wind input, the day-ahead market in particular has shown high prices. However, in the course of July also long-term prices went up. As shown in Figure 2, the price for base load electricity delivery for 2019 in the German market area rose by four percent from the beginning of June to the end of July. It rose to over 45 EUR/MWh, a more than 5.5-year high (source: Montel). Slightly weaker coal prices (red line in Figure 2) led to a decline in the high prices for the calendar year 2019 towards mid and end of July. The sharp rise in prices for CO2-certificates (orange line in Figure 2) was only able to cushion the decline in electricity prices slightly, but did not completely halt it.

On the spot market, the low wind feed-in in July led to high prices. Even the strong generation from PV systems (see Figure 3) was unable to offset low wind generation. Parts of the conventional power plant fleet also had to reduce their output due to the high water temperatures of rivers and low availability of cooling water. The daily average day-ahead price on Wednesday 25th of July 2018 stood at 58.41 EUR/MWh, the highest level in 2018.

Highs and records everywhere – the August energy market 2018 in review