The bid values increased in the first tenders in Germany for renewable energies in 2019. In contrast, CO2-limits for new cars and trucks are intended to reduce the emissions of the EU. New German power lines and power-to-gas plants should be easier to set up and plan. On the price side, the trend in April 2019 was mainly upwards. The exception: Easter holidays brought many negative prices.

After the Federal Network Agency announced the results of the first special solar tender at the end of March, the figures for the first joint solar and onshore wind tender in 2019 followed in mid-April (source: BNetzA). In the special tender for solar power, 500 MW of capacity was available, while projects with a capacity of 870 MW took part. Therefore, the tender was oversubscribed by 75 per cent.

The average price in the special tender was 6.59 ct/kWh. This is the highest value in a German solar tender since the end of 2016. In the previous tender round, the average price was still 4.8 ct/kWh. The high value can partly be explained by the fact that the quota for projects on Bavarian agricultural land for 2019 has already been exhausted (source: PV Magazine).

This year’s first joint tender for solar and onshore wind followed the tradition of 2018. All 18 contracts worth 210 MW were awarded to PV. The prices were between 4.5 and 6.1 ct/kWh, with an average of 5.66 ct/kWh and thus 1 ct/kWh lower than in the special tender. This tender was also heavily oversubscribed. 109 bids with a capacity of 720 MW were submitted to the BNetzA.

In both tenders the award values were above the values since the beginning of 2018. Figure 1 shows the average award values of all previous tenders for solar and onshore Wind from 2019. 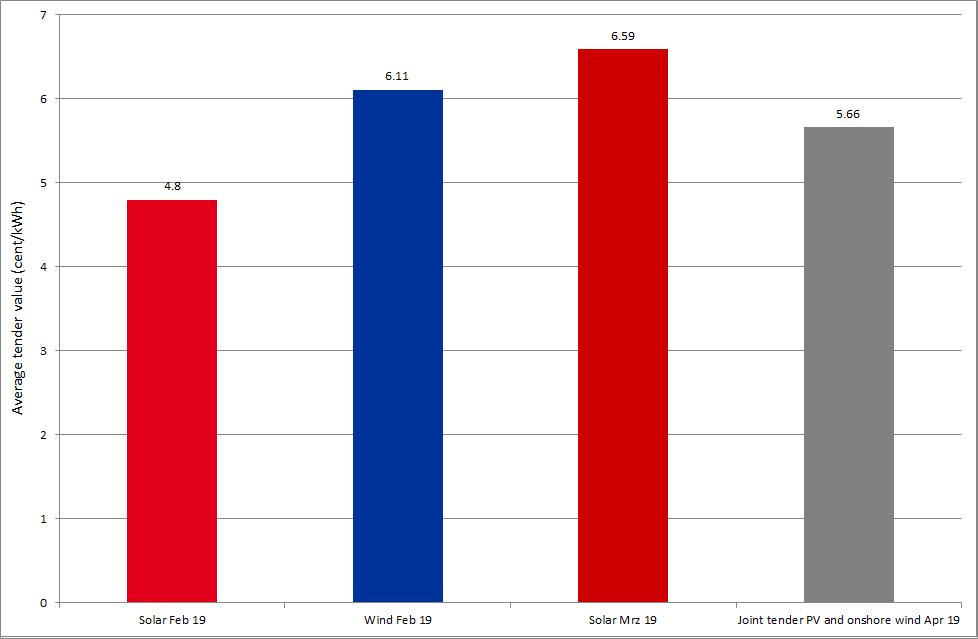 The next tenders will take place in May (onshore wind with 650 MW) and June (solar with 150 MW). According to the Federal Environment Agency, however, the current annual tender quantities are not sufficient for the 2030 targets. Both for the renewable target of 65 percent and for the reduction of greenhouse gas emissions, at least 4 GW of wind and 4 GW of PV would have to be installed annually by 2030 (source: Montel).

The CO2-limits in the transport sector, which have been under discussion for months now, have been approved by the EU. The regulations concern the new car fleets of the car manufacturers for passenger cars, light commercial vehicles, trucks and buses, whereby different limit values must be adhered to in each case.

In the case of passenger cars, the EU Council of Ministers agreed on 15th of April 2019 that new passenger cars have to emit 37.5 percent less CO2 from 2030 than in 2021. For light commercial vehicles and vans, on the other hand, a value of 31 percent applies in 2030 (source: Energate).

There are also new regulations for heavy-duty vehicles, which aim in particular to reduce CO2-emissions from trucks. Heavy commercial vehicles currently cause 6 percent of all European CO2-emissions and around 27 percent of all emissions from road traffic (source: European Council). The Romanian Council Presidency and representatives of the EU Parliament have agreed that by 2025 new trucks should have 15 percent lower CO2-emissions than in 2019. From 2030, manufacturers’ vehicles will have to emit 30 percent less greenhouse gases. According to estimates by the EU Commission, emissions from heavy-duty vehicles would rise by ten percent by 2030 without the new rules (source: Energate). At the end of May, the EU Council will also adopt the regulation for trucks.

The values are to be understood as EU-wide fleet values of the manufacturers. In addition, incentive mechanisms are to be implemented to improve the situation for manufacturers of zero-emission or low-emission vehicles. In detail, the CO2-targets for car manufacturers will be reduced if more than 15 percent of their cars sold in 2025 and more than 35 percent in 2030 are emission-free or low-emission (source: VCD). The targets should enable the EU to achieve 30 percent lower CO2-emissions in the non-ETS sectors by 2030 than in 2005 (source: European Council).

Network expansion and power to gas

On 4th of April, the German Bundestag passed the Network Expansion Acceleration Act (NABEG). Minister of Economic Affairs Altmaier wants to simplify, streamline and thus accelerate the approval procedures for new power lines. Thus, parts of the process steps in the planning and planning approval process are to be carried out simultaneously. The use of existing routes for grid reinforcement or new construction is also to be optimised (source: PV Magazine).

However, there was also criticism of a regulation in the NABEG on hydrogen electrolysis. According to the first draft of the law, grid charges should be incurred for the electricity used in electrolysers, if the hydrogen is not used to generate electricity again. This means that use in the mobility or heating sector would deprive the plant of its economic viability. Schleswig-Holstein has prevented this passage with an appeal.

The financial burden on power-to-gas plants due to grid charges in the event of hydrogen being used outside the electricity sector was removed from the law again and the Federal Council of Germany passed the final version on 12th of April (source: PV Magazine). This is good news for sector coupling.

In addition, three new power-to-gas projects are being launched. Together with MAN Energy Solutions and Arge Netz, Vattenfall is planning a 50 MW power-to-gas plant in the Brunsbüttel industrial park. According to the project partners, this will enable regional electricity from renewable energies to be turned into green hydrogen. The hydrogen can then be used as fuel for buses, trucks and ships (source: Montel).

Several electrolysers with a total capacity of 15 MW are also to be installed in the Rhine-Main region. The project is backed by a number of local energy companies (source: PV Magazine). In Emsland, the companies RWE Generation, Siemens, Enertrag, Stadtwerke Lingen, Hydrogenious Technologies, Nowega, Forschungszentrum Jülich and the IKEM Institute want to set up a hydrogen infrastructure. The core of the project will be a 105 MW power-to-gas plant in Lingen. The latter two projects are taking part in the “Laboratories of the Energy Transition” competition organized by the German Federal Ministry of Economics Affairs and Energy (source: PV Magazine).

Since the beginning of April, the price of the German lead contract, the baseload delivery for 2020, has increased by around 5 EUR/MWh or 11 percent. With CO2 certificate prices rising to over 27.8 EUR/ton, an 11-year high, and oil prices rising by 7 USD/barrel to over 75 USD/barrel again, the front year in electricity has also settled at about 50 EUR/MWh by the end of April 2019. Figure 2 shows the relative price increases of the front year electricity for Germany, CO2-certificates due December 2020 and Brent oil due December 2019 from the beginning of March to the end of April. The significant increase in April is clearly visible.

Figure 2: Relative price development of the electricity front year base Germany (candel sticks), Brent oil (orange line) and CO2-certificates (red line) from the beginning of March to the end of April 2019 (source: Montel)

The Easter weekend was particularly interesting on the spot market. The hourly prices on Easter Monday fell to a 1.5 year low of -83 EUR/MWh in hour 14. The base load price settled at -14 EUR/MWh, while the peak load was even lower at -36 EUR/MWh on this day. On average, solar panels delivered 10 GW and wind turbines 21 GW, while the load oscillated between 35 and 48 GW. Figure 3 illustrates the high share of over 75 percent in electricity generation by renewables in Germany on 22nd and 23rd April 2019.