While the wind auction in May 2019 was heavily undersubscribed, the discussion about additional CO2 pricing is entering a hot phase. In particular, the need for measures to increase the use of renewable energies and reduce greenhouse gas emissions make this clear. On the price side, May 2019 was less decisive and, after initial gains, did not provide any long-term impetus.

Wind auction in May flops

If even the Federal Network Agency speaks of a “worrying dimension” in the last wind auction, then something is clearly wrong. And indeed, the results of the tender of 1 May 2019 are not a good omen for the German wind industry. Only bids with a volume of 295 MW were received, although 650 MW were available. The tender was therefore undersubscribed by 50 percent. Due to a lack of eligibility, the BNetzA was only able to award 270 MW. The intended competition in the tenders for wind power has thus come to a standstill (source: Erneuerbare Energien).

The average awarded price of 6.13 ct/kWh was just above the price of the preliminary round and only slightly below the legally permissible 6.2 ct/kWh (source: Federal Network Agency). Figure 1 shows the range of bid values awarded and the average bid prices for onshore wind tenders since the beginning of 2018. 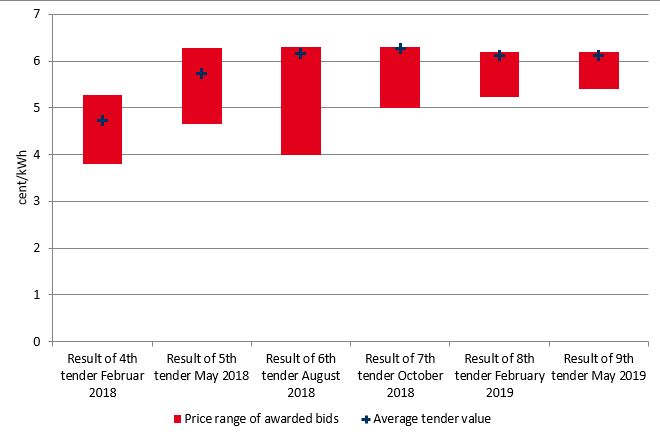 Figure 1: Key figures of onshore wind tenders since the beginning of 2018 in Germany (Source: Energy Brainpool)

Of the 35 bids submitted in the invitation to tender in May 2019, only one comes from southern Germany. This reflects the difficult situation regarding the approval of wind power plants in the southern German states. For a deeper insight, please also read our analysis on the expansion of PV and wind energy since the beginning of 2019.

It should come as no surprise that the results of the wind tender are almost contrary to the necessary expansion figures up to 2030. Although the German government did confirm its intention to reach the 65% target in the beginning of May, expansion figures until 2030 were not quantified (source: Bundestag).

On the other hand, the demands on part of the renewable energy and energy industry associations are clear. BDEW quoted a figure of an additional 100 GW of renewables by 2030, corresponding to an increase of 83 percent from the current 120 GW of wind and PV capacity (source: BDEW). An appeal by IG Metall Küste and the Bundesverband Erneuerbare Energien (Federal Association for Renewable Energies) points in the same direction. The two associations demand an annual tender volume for wind and PV of 5 GW per year each.

In addition, a total capacity of 20 GW by 2030 and 30 GW by 2035 is to be installed for offshore wind (source: PV Magazine). An even more ambitious expansion, compatible with the Paris climate targets by 2050, is specified by the Fraunhofer “Energy Transition Barometer”. For a 95 percent reduction in German greenhouse gas emissions by 2050, the expansion of wind onshore and offshore would have to increase to 11 GW per year by 2030. For PV, the expansion must even increase by a factor of 3.5 and reach around 8.5 GW per year (source: Fraunhofer IEE).

The discrepancy between the need for climate protection and political action cannot be any clearer.

The long overdue discussion about a CO2-tax in Germany brings a more positive note. While the SPD-led environmental ministry wants to present a model for a CO2-price before the summer break, the negative votes in the CDU have the upper hand. CDU party leader Kramp-Karrenbauer, for example, has spoken out in favour of strengthening or expanding emissions trading as opposed to additional CO2-pricing (source: Montel).

According to the federal government, Germany will miss its climate protection targets by many millions of tons of CO2 in those sectors that are not included in the European emissions trading system. Pursuant to to calculations by Agora Energiewende, this could result in costs of up to EUR 600 million. In accordance to the EU Effort Sharing Principle, Germany must compensate for the excessive quantities of CO2 emitted by purchasing certificates from EU states that have met their targets. In the cabinet draft of the financial plan 2019 to 2023, EUR 300 million has already been included as a cost item (source: Montel).

Due to too high greenhouse gas emissions in Germany, i.e. too few or too unambitious climate protection measures, the federal budget now has to bear the costs. Investing these millions in measures to reduce Germany’s CO2-emissions would have been a more advantageous deal.

The environment ministers of the German federal states are also in favour of reviewing aCO2 price: “The previous measures of the federal government to protect the climate have not had a sufficient steering effect,” according to the environmental ministers (source: Montel). Both the BDEW and the VKU (association of municipal utilities) want to present concepts for further CO2-pricing (source: Montel).

By the end of the year, the course is to be set for Germany to achieve its climate targets at least for the year 2030, according to Chancellor Merkel. It remains to be seen whether and how additional pricing of CO2 will be included in the German climate protection rules (source: Montel).

Another hot topic, which will soon have to become more concrete, is the phasing out of coal. On May 2019, the Structural Change Act (Strukturwandelgesetz, or “Strukturstärkungsgesetz Kohleregionen”) from the Federal Ministry of Economics and Technology passed through the cabinet. The recommendations of the Coal Commission were largely adopted (source: BMWi). On the basis of this political agreement, a law is now being drafted which is to be passed in autumn together with the Coal Exit Act. Both laws are thus to come into force at the beginning of 2020 (source: Montel).

For some power plant operators, the phasing out of coal may also be driven by economic interests. The EU emission limits for nitrogen oxides could accelerate decommissioning. The so-called BREF Directive on emission limits for large combustion plants will enter into force in 2021. Many power plants would then have to obtain a new permit for their plants. This would probably involve investments in the millions per power plant (source: Montel). A sum that some operators might rather not spend on power plants that will soon be phased out anyways.

While Energy Brainpool calculates that a supply bottleneck could be caused by the phase-out of coal, especially in 2022, prices at the long end have so far only partially followed suit. If up to 17 GW of coal and nuclear power capacity were to actually leave the German electricity market by the end of 2022, this should have a noticeable impact on forward market prices. However, the price for baseload delivery in 2023 is currently only 4 EUR/MWh higher than the one for 2020. It appears that the market does not yet regard the current coal decommissioning plans as completely set in stone. According to the coal commission’s proposal, the approval of the BNetzA and the TSOs would always be required if power plants were to be shut down (source: Montel).

While the base load supply for electricity in Germany for the 2020 calendar year was still 48 EUR/MWh at the beginning of May, the price rose to just over 50 EUR/MWh during the first week of May. This increase was mainly driven by the price development of CO2-certificates in the first half of May. During this period, the EUA contract for December 2020 at the ICE in London rose from 25 to over 27 EUR/tonne. The price in the second half of the month oscillated between 47 and 49 EUR/MWh. It hit 47 EUR/MWh around the end of May. The ups and downs could also be seen for the CO2 contracts.

Figure 2 shows the price development of baseload delivery for electricity in 2020 and the CO2-certificates due December 2020 during May 2019. Especially the resurgence of the trade war between the USA and China as well as the resignation of British Prime Minister May unsettled the commodity markets this month.

On the short-term market, generation from wind and solar power pushed prices down both on Sunday 12th and Sunday 26th of May. The high production of renewable energies resulted in a low feed-in of hard coal on many days in May. However, the way lignite-fired power plants operated was less strongly influenced, as Figure 3 illustrates.

Figure 3: Power generation and day-ahead prices in May 2019 in Germany (source: Energy Brainpool)