The most important changes in the German renewable energy act 2017

1. August 2016 / Simon Göß / Comments Off on The most important changes in the German renewable energy act 2017
CEENews: Europe, Renewable Energy

The important points of the new renewable energy act (EEG) of Germany are fixed. After notification by the European Commission the new amendment to the EEG is to come into effect in January 2017.

The most important change of the new EEG 2017 is the switch from fixed feed-in tariffs to competitive tenders by the Bundesnetzagentur, the German regulator. Through this change the government aims to introduce a quantity control for the installations of renewable energies. By 2025 renewable energies should have a share of 40 to 45 percent of the total power consumption. For citizen’s energy projects special regulations apply, they do however also have to take part in the tenders.

The yearly quantities of wind power, PV and biomass to be tendered are shown below. It should be noted that the real tender volumes are only published ahead of each tender: 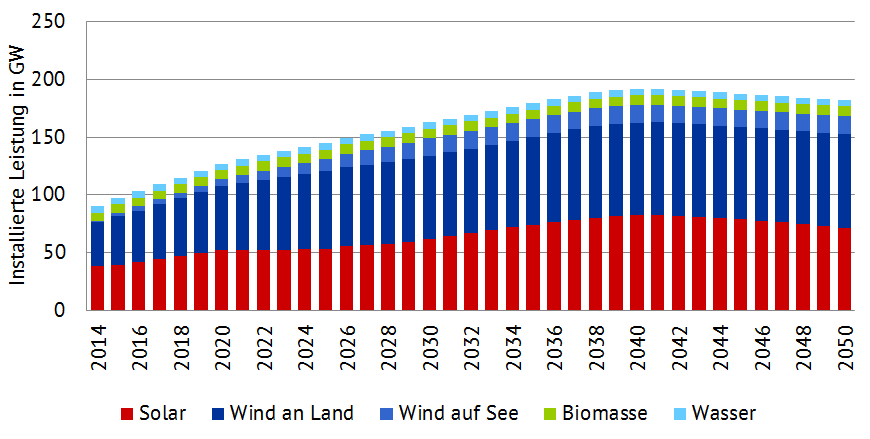 Expansion path for renewable energies in GW until 2050 according to EEG 2017 (Source: Energy Brainpool)

This expansion path is certainly only valid, if no new amendments of the EEG will occur during that time. It is however likely that there will be new amendments changing the renewable energy framework in the future.

In addition, wind power expansion via tenders is limited in grid extension areas, i.e. areas where grid bottlenecks exist. The grid extension areas have yet to be determined and only 58 percent of the average expansion of wind during the years 2013 to 2015 is being tendered there. Simultaneously, in those areas so-called interruptible loads with a capacity of up to 2000 MW can be employed to offset high renewable feed-in.

Regional certificates have been introduced as should enable direct marketing for regionally produced electricity from renewable energy facilities under the EEG 2017 regime.

The energy sector in Germany debates about the positioning of bids in the tenders for onshore wind. It is especially important to determine the position of one’s own bid in the merit-order for the tenders, when compared to the bids of competitors. All participants in the tender therefore have to identify which cost degression for onshore wind can be incorporated into the bids, as the construction of facilities can be delayed up to 30 months after winning in a tender. With the new single-stage reference-yield model it is also very important to conduct an exact assessment for the reference yield of the wind turbines participating in the tenders.

Other important points are the self-consumption and storage. Here it is especially relevant which taxes, fees and levies apply for which use cases. In a similar manner, PV-for-tenants business models attracted attention. In some cases part of the current renewable energy levy can partly be waived. This might make PV-for-tenants a viable business model again and might represent a growing field.

In the energy sector knowledge is the key