13. December 2018 / Philipp Goetz / Comments Off on Affects of volatile Co2-prices on the electricity price – what does the future hold?
Analysis: Energy Policy, Trading

European CO2 prices have developed very dynamically in 2018. They rose to over 25 EUR/ton in September and then fell sharply again within a few days. Prices however have also fluctuated considerably in recent years. How does this affect the price of electricity? And what can we expect in the future, especially in view of upcoming fourth phase of the ETS (Emissions Trading System)? Guest author: Michael Claußner (Junior Expert at Energy Brainpool)

The European carbon market is currently in its third phase (2012-2020). Several sectors (among others, e.g. aluminium industry, air transport) and greenhouse gases (nitrogen oxides and perfluorocarbons) were included in this phase [1]. In principle, such enhancements lead to increased liquidity on the market, which can counteract price volatility.

As can be seen in Figure 1, however, strong price jumps within short time intervals could still be observed in recent years, as previously. In March 2014, for example, CO2 certificates lost 25 percent of their value within just three days. An even greater fluctuation occurred in December 2016: Within 15 days, CO2 prices climbed from 4.30 to 6.07 EUR/ton. This corresponds to an increase of 41 percent. Daily volatilities further intensified the effect. Examples include the leaps from 26 to 27 April 2016 (+12 percent) or from 13 to 14 September 2018 (-18 percent; see also Figure 1).

CO2 prices fluctuate – in wich ways does this affect the electricity price?

A glance at Figure 1 gives an idea: the CO2 price has a significant influence on the course of the electricity price. In principle, two types of cause-effect relationships can be observed. On the one hand, a CO2 price increase is directly associated with a linear increase in the short-term marginal costs of fossil power plants.

Due to the higher marginal costs of the price-setting power plant in the merit order, the electricity price therefore also rises linearly. If we take into account the different emission factors among varying power plant technologies, it is noticeable: their marginal costs increase linearly, but not all to the same extent.

For example, as CO2 costs rise, the short-run marginal costs of a coal-fired power plant grow faster than those of a combined cycle gas turbine (CCGT) plant. This results in so-called “fuel switches” at certain price thresholds, when one technology can undercut the other in terms of cost. Such an effect is illustrated by the example of hard coal and CCGT in Figure 2 and occurs to varying degrees depending on the CO2 price level.

The power plant that is now setting the price (here: CCGT instead of hard coal) has a lower emission factor. If the CO2 price continues to exceed the level of the “fuel switch”, its increase will henceforth lead to a proportionally lower increase in the electricity price.

However, this effect can only be observed to a limited extent in Germany due to the well-mixed power plant structure (in the merit order) with multiple efficiencies. 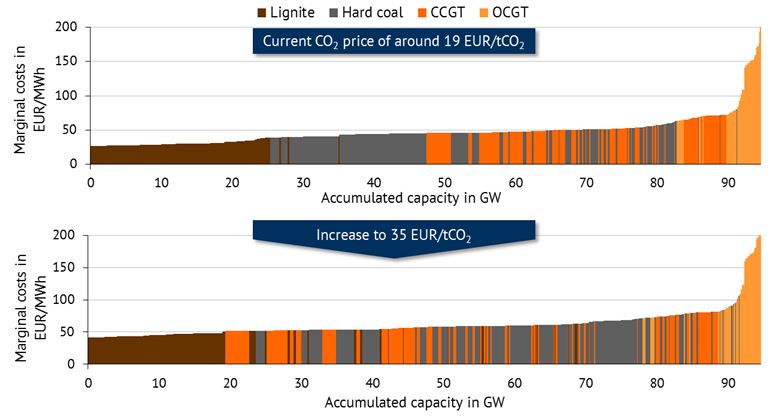 Background: as can be seen in Figure 3, the number of emitted EUAs in recent years has partly been lower than assumed (due to partial or complete closures and capacity reductions).

Nevertheless, there are still large surplus quantities of certificates from the second trading period in circulation. This counteracts the scarcity of certificates on the market and thus the desired price signal.

For this reason, between 2014 and 2017 a total amount of 900 certificate was withdrawn from the market and transferred to the MSR (“Market Stability Reserve”). Since there were still about 800 million surplus EUAs remaining, mechanisms like this need to be strengthen for the next trading period. The MSR is a key criterion for Phase 4 reforms. 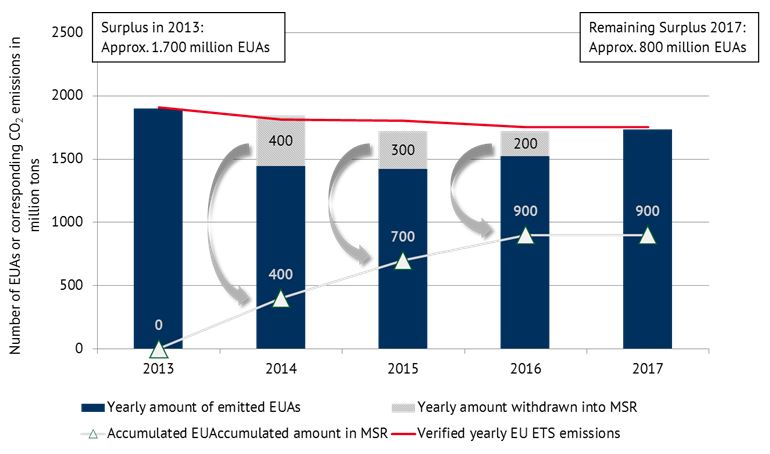 In summary, in April this year, the EU adopted the following reforms for the fourth trading phase of the EU ETS from 2021 to 2030³: 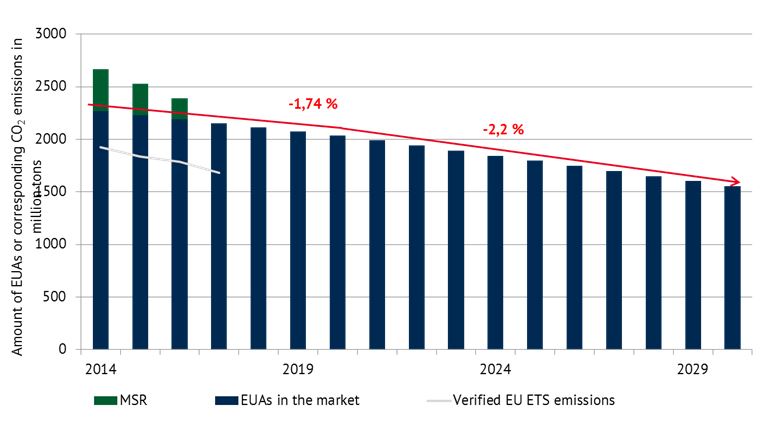 How could these developments affect CO2 and electricity prices?

As a result of the EU’s increased level of ambition, experts expect certificates to become increasingly scarce. This would increase CO2 prices in the long term. It is assumed that the changed expectations about future price developments were already evident on the market when the temporary high occurred in September 2018.

As an example, Figure 5 illustrates the influence of different CO2 price levels on such prices. The forecasts are based on calculations of our fundamental model Power2Sim. 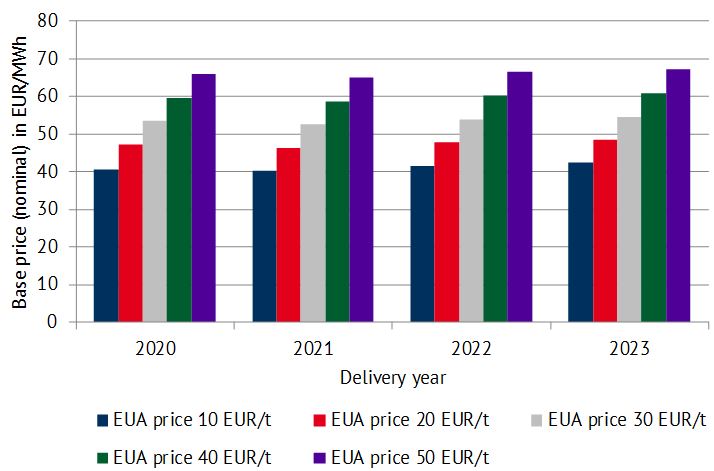