12. December 2018 / Simon Göß / Comments Off on What will happen with renewables and coal? November 2018 in the review
Series: Coal Market, Energy Policy, Power Market, Regulation

A new law for the energy sector has been agreed on with some delay. It has important changes in store for the coming period. The Coal Commission also has new findings. At the long end, the prices, driven by global economic uncertainties, mainly went down. But they caught up again in the end of November 2018.

The “energy gathering law” to come into force in 2018

At the beginning of the new Great Coalition in spring 2018, the law was still known as the 100-day law. The negotiations between SPD and CDU on the Energiesammelgesetz “Energy gathering law” (EnSaG) have dragged on over the summer break and into November. At the very least, the EnSaG should completely go through the legislative process before the end of 2018. In particular, it should determine the special tenders for renewable energies.

The Federal Council however criticised the legislative process and called for improvements. The draft also includes amendments to the CHP Act and the Energy Industry Act (source: BMWi). A summary of the most important points and changes follows.

By 2021, 4 GW of solar and 4 GW of onshore wind energy are to be additionally tendered. However, these special tenders for renewable energies will be staggered: 1 GW in 2019, 1.4 GW in 2020 and finally 1.6 GW in 2021. Moreover, the quantities for solar energy will not be counted towards the 52-GW subsidy cap for solar PV in Germany which is under criticism by its own right.

The subsidy for solar systems with a capacity of 40 kW or more should also be reduced surprisingly sharply to 8.33 ct/kWh from 1 January 2019. Especially for “PV power for tenants” projects, this reduction of around 20 per cent could result in less projects beind developed (source: PV Magazine).

However, after protests against this sudden reduction in support, the coalition parties agreed that the new support level will only be reduced to 8.9 ct/kWh. Also the parties agreed on 27th of November that the reduction will take place successively over the months of February, March and April 2019 (source: PV Magazin).

A new and collective term should apply to CHP plants with steam busbars, whereby it is no longer possible to consider power plants in separate blocks if they are connected with a steam collective facilities. The support of existing power plants according to §13 KWKG2017 is clearly limited (exclusion of own consumption).

In addition, a reduction of the CHP surcharge for plants above 50 MWel is planned. The cumulation of surcharges with investment subsidies under the KWKG 2017 will be prohibited (with the exception of very small plants up to 20 MWel), and the approval under state aid law of the EEG levy exemption for CHP electricity will also be implemented. However, this rule will not apply to plants with an electrical output between 1 MW and 10 MW (source: BBH).

The regulations on grid connection to the L-gas grid will be adapted in order to support the conversion of the supply from L-gas to H-gas. In detail, this means that network operators should not make any further investments in L-gas networks. The obligation to connect customers to an L-gas network can in any case be waived if the connection to an H-gas network is reasonable (source: Ritter Gent Collegen).

Offshore wind energy law and offshore facility law:
Changes have been made to the planning and approval laws that allow wind turbines to be erected at sea even if they are not connected to the grid. Here the possibility of direct electrolysis and production of hydrogen at sea is in the foreground.

Operators of electricity supply networks are now obliged to maintain a separate balancing group for the energetic and financial balancing of measures for system security in accordance with section 13 (1) sentence 2 and section 14 (1c) of the Energy Industry Act (EnWG) and, in the case of having to conduct measures mentioned above, also to manage the balancing group.

Apart from the changes described above, the EnSaG also contains a number of smaller and larger changes to a total of 20 laws and ordinances (source: BMWi).

The coal commission wrestles with shutdowns agreements for power plants

The first coal-fired power plants are to be shut down by 2022. The power plant shutdowns are to take place in agreement with the operators between 2019 and 2022, if possible on the basis of contractual regulations.

In addition, the financial compensation for the power plant operators is to be financed from the federal budget and not through a levy. The working paper of the Coal Commission also proposes to delete the CO2 certificates from the national budget that coal-fired power plants leaving the market in this way do not emit. They should therefore no longer be available to the market and other plants (source: Energate).

Discussions within the Commission will, however, extend beyond the previous end date of the commission in December 2018. The Federal Ministry of Economic Affairs announced that the Commission’s work is to be completed by 1st of February 2019. In particular the support of the structural change the power plant closures will entail is to be further elaborated (source: Montel).

The results of the joint tendering of onshore wind and solar in November 2018 presented a very similar picture to that of April this year. All 36 awarded projects have been PV systems. Only one wind project participated in the tender which allocated a total capacity 200 MW, but was not considered due to a higher bid price.

In addition, the average value of the award increased by 0.6 ct/kWh to 5.27 ct/kWh compared to the tender of April (source: Federal Network Agency). Figure 1 shows the average award values in German tenders for PV and wind energy in 2018. 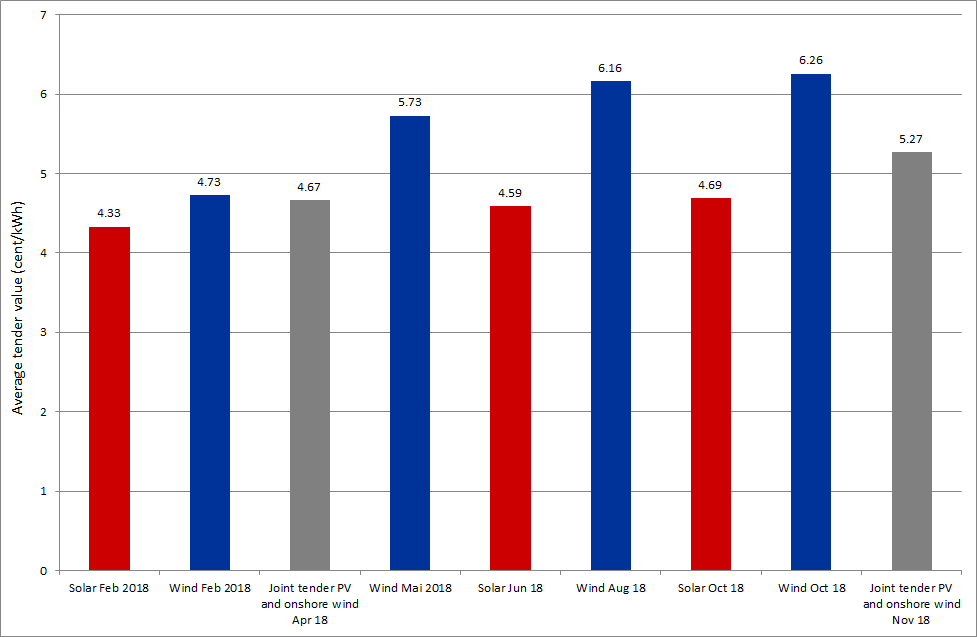 Prices down mostly with little ups

In November 2018, the global economic outlook and the unclear situation of the Brexit had an impact on prices at the long end of the commodity curve. The highs of September and October are once again history. All commodities lost. First and foremost oil, which suffered losses due to the continuing trade dispute between the US and China. Despite American pressure on Iran and the attempt to reduce its oil exports, the oil supply seems to prevail over the declining demand for oil at the current point in time.

Figure 2: Oil price development for Brent Crude at the ICE for June 2019 from August to November 2018 (Source: Montel)

The fact that the German economy did not grow in the third quarter also had an impact on prices. The price of CO2 certificates, for example, fell by around 10 EUR/ ton, or 40 percent, from its high of over 25 EUR/ton in mid-September to the beginning of November. By 27th of November, however, the price of the certificates had recovered again by 20 percent to just over 20 EUR/ton.

A similar trend prevailed for the baseload delivery for German electricity for 2019. The price fell from 57 EUR/MWh on 10th of September 2018 to 47 EUR/MWh at the beginning of November 2018 and rose again to over 52 EUR/MWh at the end of this month.

Figure 3: Relative development of prices for CO2 certificates for December 2019 (candel sticks) and the baseload delivery of electricity for Germany in 2019 (orange line) from the beginning of September to the end of November 2018 (source: Montel)

Spot market prices at day-ahead averaged at almost 57 EUR/MWh in base and above 60 EUR/MWh in peak delivery. The highest monthly levels since May 2011. However, at the beginning and middle of November, wind generation temporarily depressed prices to lower levels, as can be clearly seen in Figure 4. However, with little generation from renewables, around 22, 23 and 27 November, hourly prices of over 90 EUR/MWh were quickly reached.