After long discussions, the federal and federal state governments agreed on changes to the climate package before the end of the year. The Federal Network Agency also announced a number of tender results for renewable energies. In addition, the third smart meter gateway was certified, so their rollout can begin soon. However, a real end-of-year rally on the price side of things can only be noted for oil.

The negotiations in the mediation committee between the federal and state governments brought a pre-Christmas gift for climate protection. Finally, the disputed points between the CDU and SPD-led government and the states with Green government participation were settled in mid-December.

Consequently, the price of emission certificates for heating and transport fuels, which will be issued from 2021, will start at 25 EUR/ton instead of 10 EUR/ton. In addition, this price will now rise to 55 EUR/ton by 2025 instead of only 35 EUR/ton. The price corridor for 2026 will then be 55 to 65 EUR/ton (source: Montel).

Besides that, the additional revenues from the higher CO2-prices will be used to reduce the renewable energy levy by even larger amounts. An increase in the commuter allowance was also agreed on, beyond the provisions of the September climate package.

The agreement on the federal-state financial tableau now also secures a total of EUR 1.5 bn for the federal state premiers over the period 2021 to 2024. A fair distribution of revenues between the federal and state governments has thus been achieved.

On 20 December 2019, the German Bundesrat also approved the compromise from the mediation committee. The amended passages can now enter into force as planned on 1 January 2020.

However, a number of questions remain unanswered regarding the expansion of renewable energies. These are to be decided at a special summit between the federal states and the federal government in January 2020 (source: PV Magazine). Therefore, the New Year will remain as important for energy policy as the old one ended.

With the results of the last tender for a capacity of 500 MW for onshore wind by the Federal Network Agency, the months of low participation in the auctions ended for the first time this year. Until that time, all tenders for onshore wind in Germany in 2019 have been undersubscribed, with only around 30 percent of the tendered capacity being awarded to projects.

In the latest auction in December 2019, the Federal Network Agency awarded 509 MW. However, bids were received for a total of 686 MW of generation capacity. Due to the higher competition, the average tender price fell by 1.5 percent compared with the previous auction: It now stands at 6.11 ct/kWh. Since May 2017, the German Federal Network Agency has awarded over 7000 MW of wind power capacity.

However, only 1000 MW of this capacity are already in operation, less than 15 percent of the potential capacity (source: Montel). In the whole of 2019, the net construction of new wind turbines on land amounted to only 736 MW. This meagre expansion is indeed a worrisome slump, especially with regard to an expansion of around 4700 MW per year necessary for the climate targets in 2030 (source: Montel).

In the joint tender for 200 MW of wind and PV from November 2019, PV was once again able to prevail. Market players submitted no bids for onshore wind. The average tender price amounted to 5.4 ct/kWh. In 2019, the expansion of PV had been much more successful than that of wind energy. 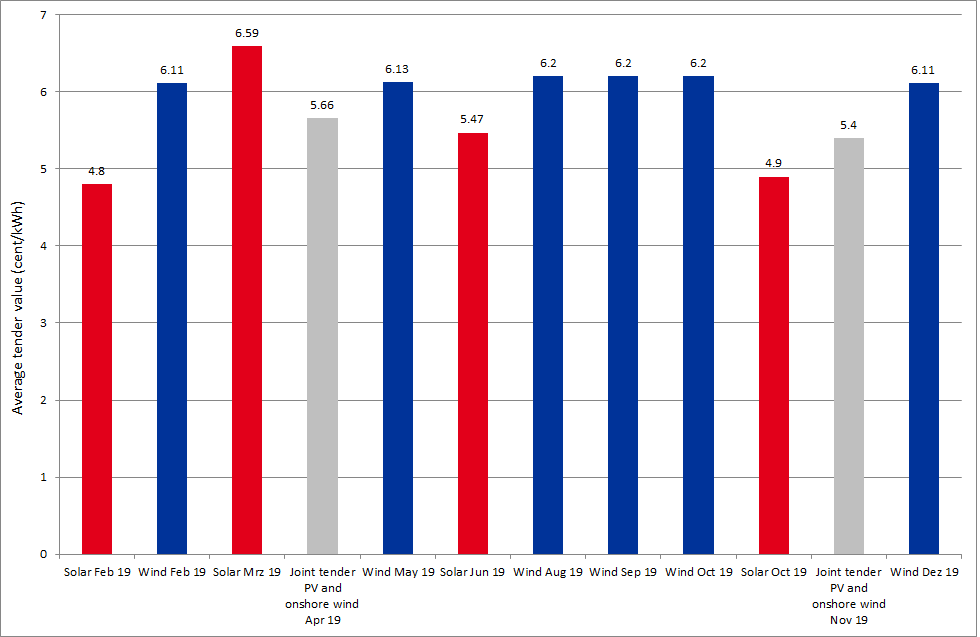 Figure 1: tender results for wind and PV in Germany in 2019 in ct/kWh (Source: Energy Brainpool)

Now that the German Federal Office for Information Security (BSI) has also certified the smart meter gateway of a third manufacturer on December 19, 2019, the rollout can finally begin (source: Montel). The certification of three of these communication modules from different manufacturers is one of the prerequisites for the mandatory installation of smart meters to begin.

The BSI tests the smart meter gateways for security gaps to ensure the privacy and data security of future users. Now the so-called market declaration by the BSI is required so that the installation can actually begin. The market declaration should analyse the effects of the mandatory installation and determine the technical possibilities. Its publication is announced for the beginning of 2020 (source: Bizz Energy).

This means that the go-ahead for the rollout, which actually was planned to begin as early as 2017, will probably start with a three-year delay.

A year-end rally on the commodity markets only took place to a limited extent this year. Oil prices achieved the only increase in the last quarter. They have risen by 9 percent since the beginning of October 2019. In particular, the recent agreement reached in the trade dispute between the US and China has led to more optimistic consumption forecasts.

Brent prices have risen from USD 60 to over USD 66 per barrel since the beginning of December. Emission allowance prices did not show a real trend and were caught in ups and downs during the last three months. Although they reached a three-month high of 27 EUR/tonne before the Christmas holidays, they fell back to 25 EUR/tonne by the end of December.

By contrast, prices for the German front year electricity went down in recent months. Since October, the contract lost 8 percent and ended at just under 45 EUR/MWh. Figure 2 shows the relative price movements of oil, EUAs, and electricity from early October to the end of December 2019.

The last month of 2019 showed its windy side, especially in the first half. Wind power feed-in averaged over 30 GW from 6th to 9th of December, brought down electricity prices to more than -50 EUR/MWh and accounted for more than 34 percent of generation over the entire month.

Towards the end of the month, consumption declined due to the holidays. As a result, generation at thermal power stations increased only to a limited extent despite lower wind feed-in. Figure 3 shows the power generation of the various energy sources and the day-ahead prices in December 2019.