With the current “EU Energy Outlook 2050”, Energy Brainpool shows long-term trends in Europe. The European energy system will change dramatically in the coming decades. What do current developments in the EU mean for electricity prices, revenue potential and risks for photovoltaics and wind?

The electricity markets in Europe are subject to constant change, which makes current price scenarios indispensable. This is the only way to assess market developments, assets and contracts, investment decisions, PPAs or business models correctly.

The “EU Energy Outlook 2050” shows the development of the “EnergyBrainpool”-scenario for EU-28, Norway and Switzerland. Actual processes in the individual countries can vary considerably. In order to make well-founded decisions, detailed modelling of the individual national markets and the influencing factors there, including sensitivity analyses, is essential. 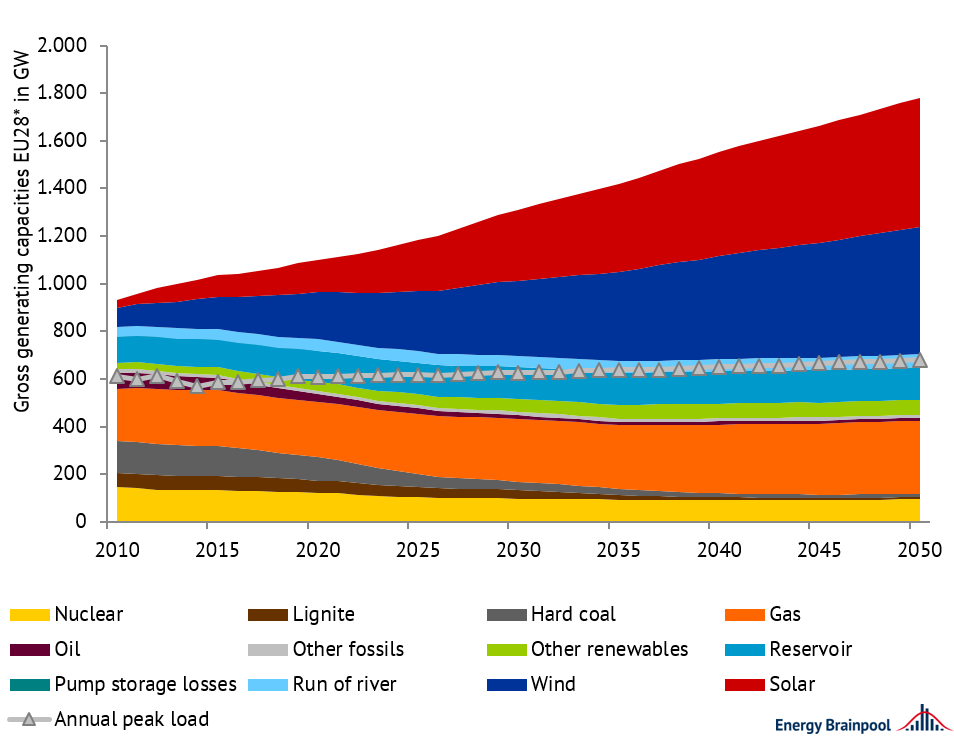 The power plant fleet in Europe has developed over many decades and was particularly dominated by fossil generation capacities. Many of the power plants on the market have already reached an advanced age. They will have to be replaced by 2050, including all nuclear power plants (except those under construction).

The current climate debate is having an effect, so that a total of ten EU-states have now decided to phase out coal in order to limit climate change. Well known and proven technologies are available for the future: gas-fired power plants, renewable energies and nuclear power plants.

Wind power and photovoltaics in particular continue to have great growth potential. These technologies are now competitive – thanks to the sharp drop in costs over the past ten years. This is also evident from the increasing number of PPA-based projects, especially for solar installations. Experts expect this development to continue.

In the “EU Energy Outlook 2050”, the share of these volatile renewable energies (vRES) will rise to around 59 percent of the total supply by 2050. Renewables account for 75 percent of the power plant fleet.

At the European level, gas-fired power plants will be the main source of controllable fossil generation capacity in the future. This is due to the lower emissions compared to coal-fired power plants. Even with carbon capture storage (CCS), the latter continue to lose importance.

The capacities of nuclear and coal-fired power plants will be reduced by more than 55 percent by 2050 Germany, France, Great Britain, Spain, the Netherlands, Finland, Italy, Ireland, Portugal and Denmark have announced coal exits for the future. As a result, the currently installed output of hard coal in particular will fall sharply to around 36 percent by 2030.

In overall terms, the share of generation capacity from controllable thermal power plants will be reduced from 50 percent to around 25 percent by 2050. This will have a considerable impact on the structure of electricity prices, which will increasingly be influenced by vRES prices. 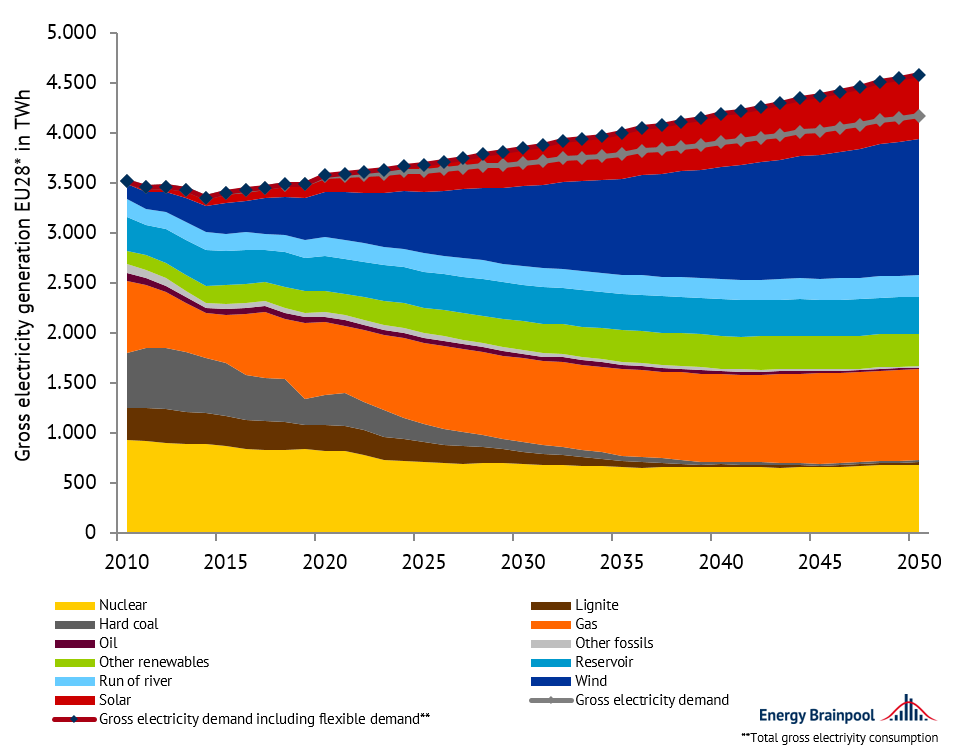 In the industrial sector, increased efficiency can prevent a significant increase in electricity consumption. 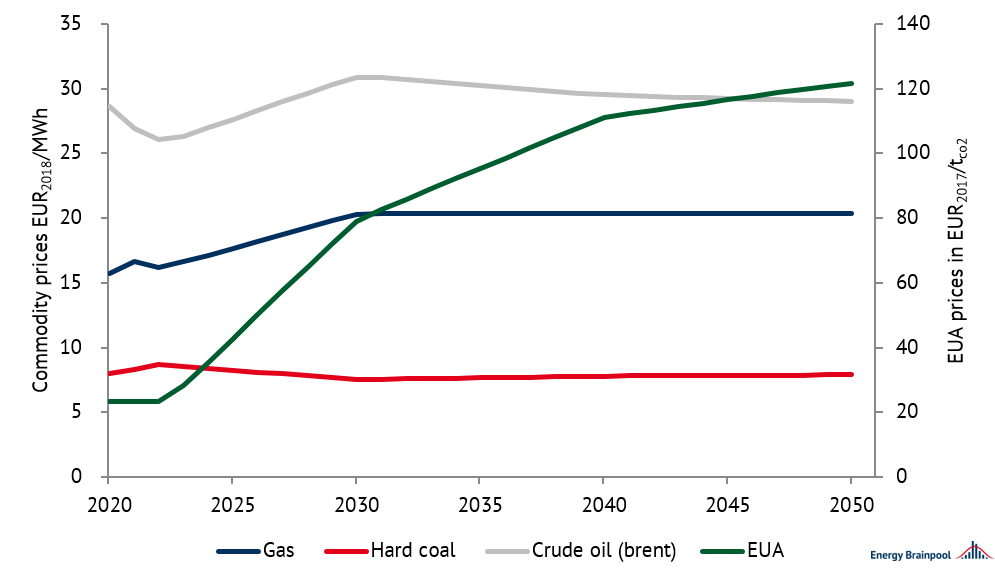 The development of the most important commodities until 2040 is based on the “Sustainable Development” scenario of the IEA’s World Energy Outlook 2019 [2]. In this scenario, three goals are defined: the stabilisation of climate change, clean air and universal access to modern energy.

In this scenario, prices for CO2 certificates rise significantly. The prices for gas, oil and hard coal remain at a rather constant level. From 2040 to 2050, the development  is an extrapolation. 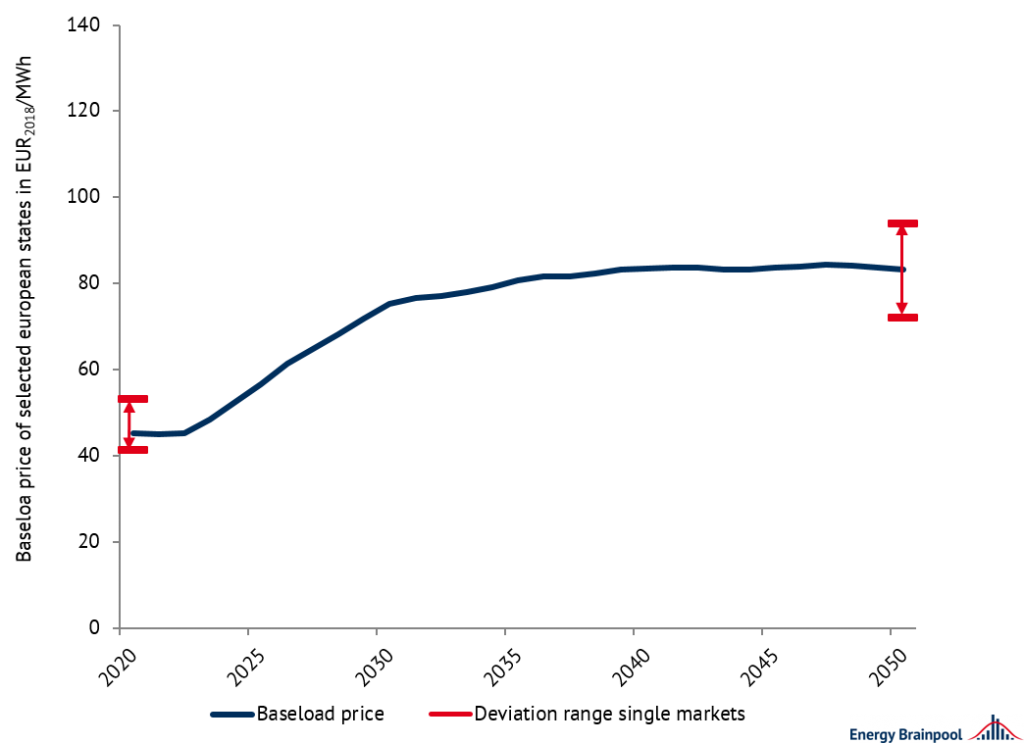 Figure 4: annual baseload prices and the range of deviations of national markets of selected countries in Europe on average, Source: Energy Brainpool

The actual developments in the individual countries differ, in some cases very significantly, from one another. This is shown by the fluctuation margins shown. In particular, countries with little expansion of renewable energies are recording a steady rise in electricity prices (due to the development of commodity prices). 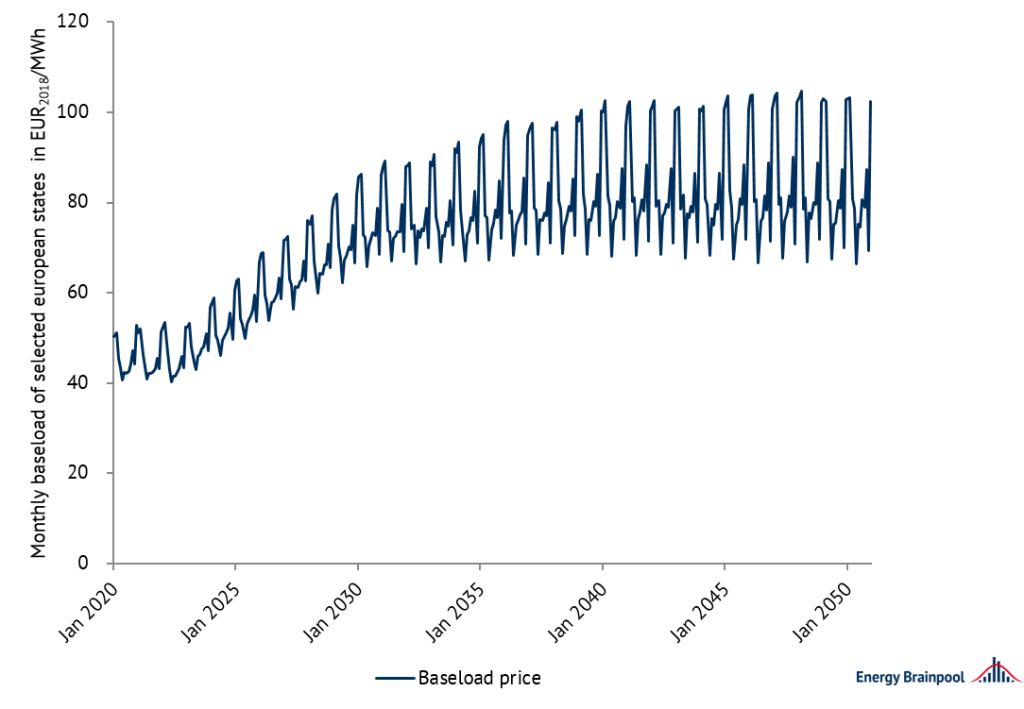 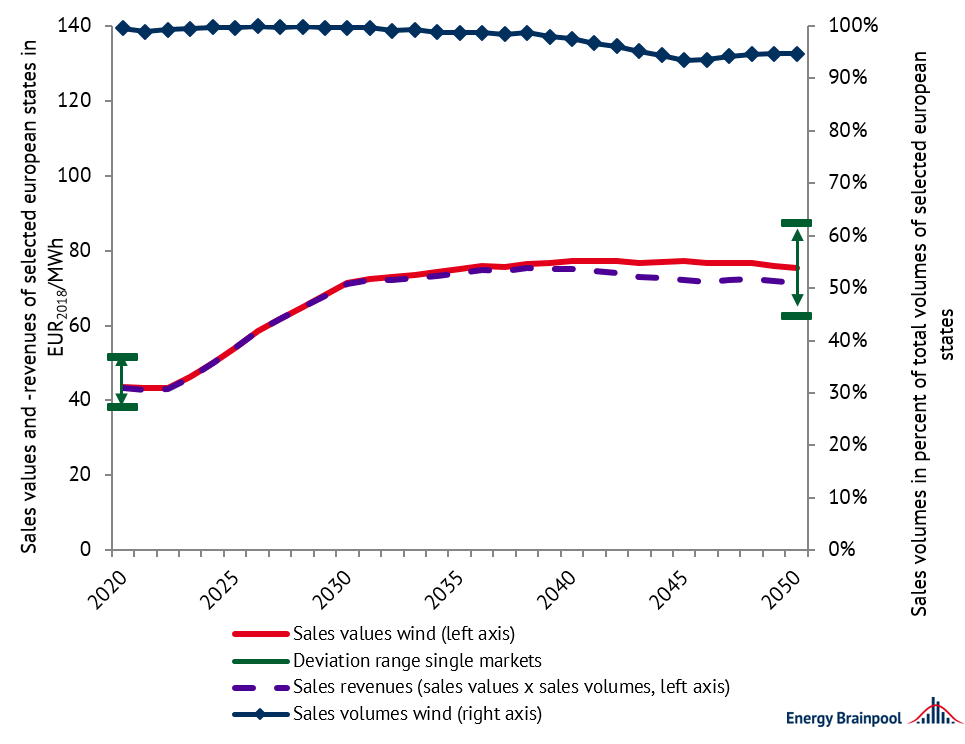 The sales value is the average volume-weighted electricity price that wind power plants can achieve on the spot market. Only generation hours with positive electricity prices are taken into account (including 0 EUR/MWh). By 2030, the sales value of wind energy will rise more strongly and then stagnate due to further increases in capacity.

Simultaneous generation reduces electricity prices in these hours (merit order effect). The sales volumes (share of generated volumes at electricity prices >= 0 EUR/MWh) will decline only slightly on average in the EU. And in some countries they will also decline very significantly. Sales revenues result based on the product of sales values and sales volumes.

Despite the high share of renewable energies, the high number of hours during which steerable  fossil-fuel power plants set the price makes rising positive revenue streams possible. The fluctuation range of the markets shows how different the country-specific average revenue opportunities of wind turbines are. 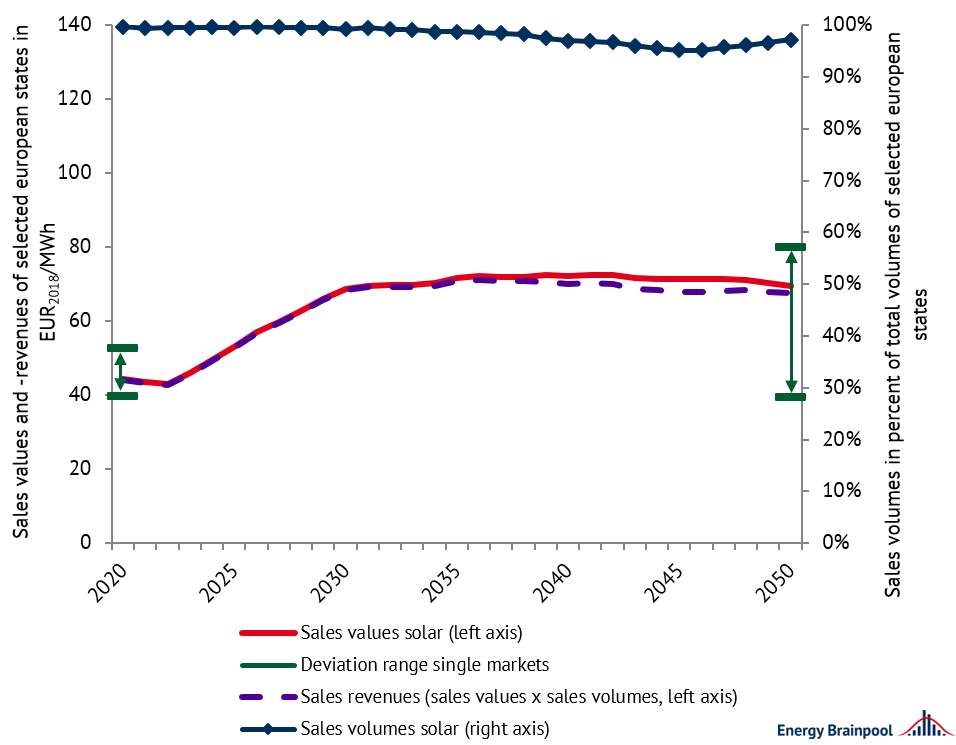 To sum it up, the sales volumes for solar energy are also declining only slightly on average in the EU, but very significantly in specific countries. The large fluctuation margin of the solar sales values in the individual countries shows how strongly the revenue opportunities vary.

Here, however, it should be noted that in a sunny country high revenues are possible even with low sales values. The reason for this is that the plants are operating at better utilisation rates. 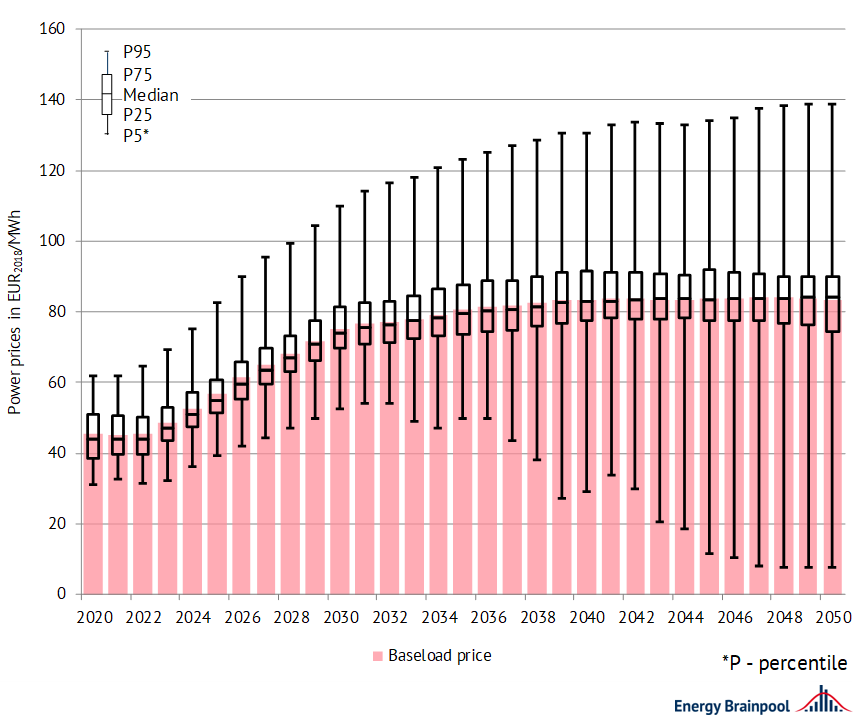 In the scenario, many factors lead to a significant increase in price volatility. On the one hand, the generation costs of steerable fossil-fuel power plants are rising due to the development of commodity prices. On the other hand, the expansion of fluctuating renewable energies has a price-reducing effect.

As a result, extreme prices occur much more frequently from today’s perspective and become a normal part of the electricity price structure of the day-ahead market. 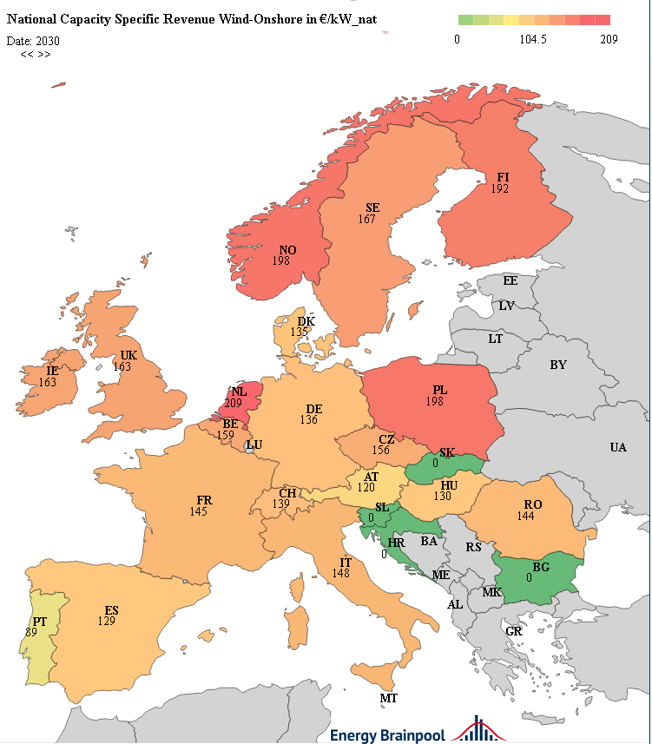 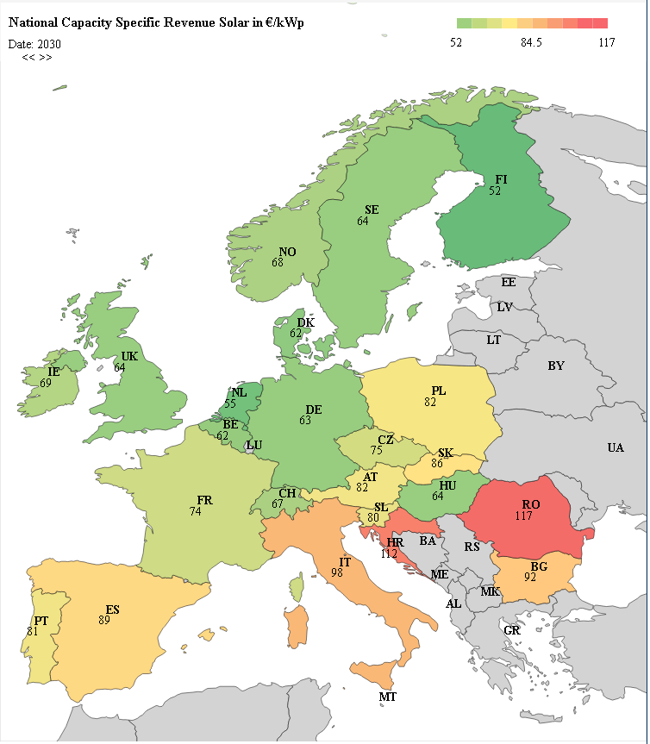 This is made possible by the capacity-specific revenue. It represents the respective average revenues per installed kW. By looking at the average sales values in EUR/MWh it seems like that a PV system in Spain generates less revenues than a PV system located in the UK.

However, this is put into perspective by the high capacity utilisation and thus full load hours in Spain, so that the system ultimately generates more revenue per kW than in the UK. Such a parameter can, of course, also be determined for a specific location.

Fluctuations due to weather risks

In Germany and other European markets, due to the subsidies of wind and solar power, the focus so far was solely on the influence on the quantities produced, in case of the weather risks associated with fluctuating renewable energies. The guaranteed feed-in tariff and market premium meant that all price risks were irrelevant.

For example for wind turbines, this meant that high wind volumes generated high revenues and little wind led to low revenues. In order to estimate revenues, an expected quantity (e.g. P50 quantity) was consequently multiplied by the fixed subsidies.

However, this situation changes for the increasing number of generators that sell their electricity on the market without any subsidies. Their revenues are now based on volatile electricity prices. Since these prices are also affected by weather, we have to consider weather impacts in both volume and price respects.

Herein, we will demonstrate the existence of an anti-correlation between the two weather effects, which tends to stabilise revenues and reveals that weather risks are prone to systematic overestimation.

This anti-correlation is illustrated by the modelling results of a scenario calculation for the year 2021 using the weather years 2005 to 2016. Figure 1 shows the percentage fluctuations in producible volumes and sales revenues around the respective mean value. Multiplying the producible volume (in MWh) by the sales revenue (in EUR/MWh) gives the yearly revenues of the plant (in EUR/MW/a).

Their deviations from the mean value are given as percentages as well as in EUR/MWh. Basically, they refer to revenue fluctuations of the produced volumes that are expected on a long-term average (i.e. p50-volume).

For example, producible volumes in the weather year 2007 are more than 16 percent above the p50-value, but sales revenues in EUR/MWh are 8 percent lower. The annual revenue of the plant therefore fluctuates only by + 7.5 percent. This translates into + 3.12 EUR/MWh deviation from the revenues planned with the p50 volume as the long-term average.

In contrast, producible volumes in the weather year 2010 will be 10 percent lower, which corresponds roughly to the p90 volume. Basically, the lower volumes are more than offset by the rise in sales revenues of over 11 percent, and annual revenues remain stable (plus 0.7 percent).

However, if expected revenues of a plant are calculated through multiplication of the p90 volume (of the weather year 2010) by the average sales revenue only, the weather risk is systematically overestimated and the stabilising anti-correlation is ignored. 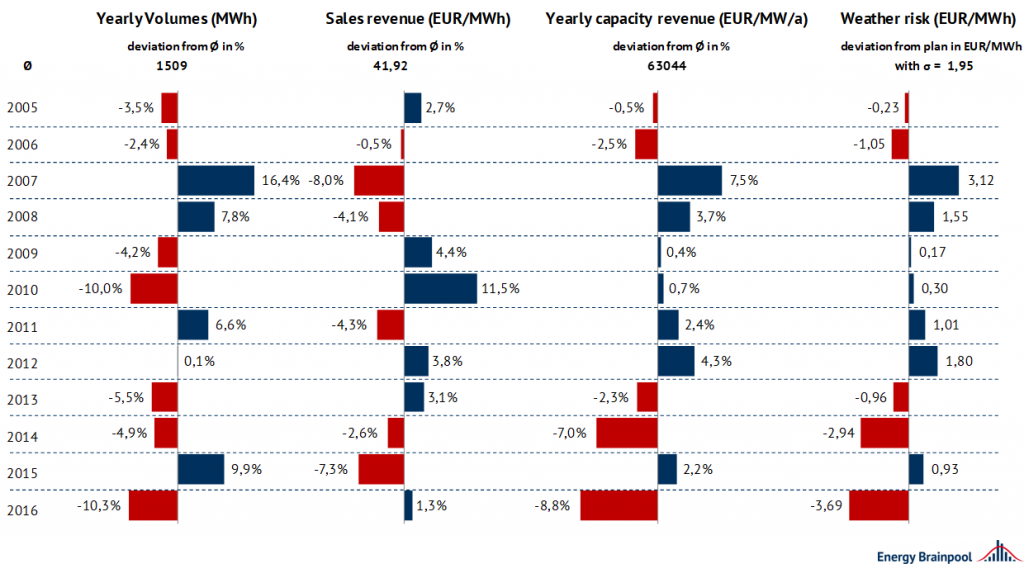 Figure 11: comparison of the influence of different weather years on producible volume and sales revenue in 2021, depicted as percentage deviations from the mean value of all weather years, source: Energy Brainpool

When comparing the weather years 2010 and 2016, however, it also becomes clear that this anti-correlation is not equally present in every weather year. It can be cancelled out by simultaneous solar feed-in. For example, in 2016, despite low annual volumes, wind power feed-in was distributed more strongly over hours with simultaneously high solar feed-in than in 2010, so that sales revenues hardly increased at all.

Overall, there are weather year specific fluctuations in revenues that reflect both weather-related volume and price risks. If the volumes of p90 (e.g. 2010) or p50 weather years (e.g. 2009) are used to estimate weather risks, it is advisable to consider these in combination with expected price effects. Otherwise, weather risks may be overestimated.

The values presented will change significantly in the future due to changing power plant parks and thus changing cannibalisation of renewable energies.

Read more in our white papers “Power-Purchase-Agreements I & II”. 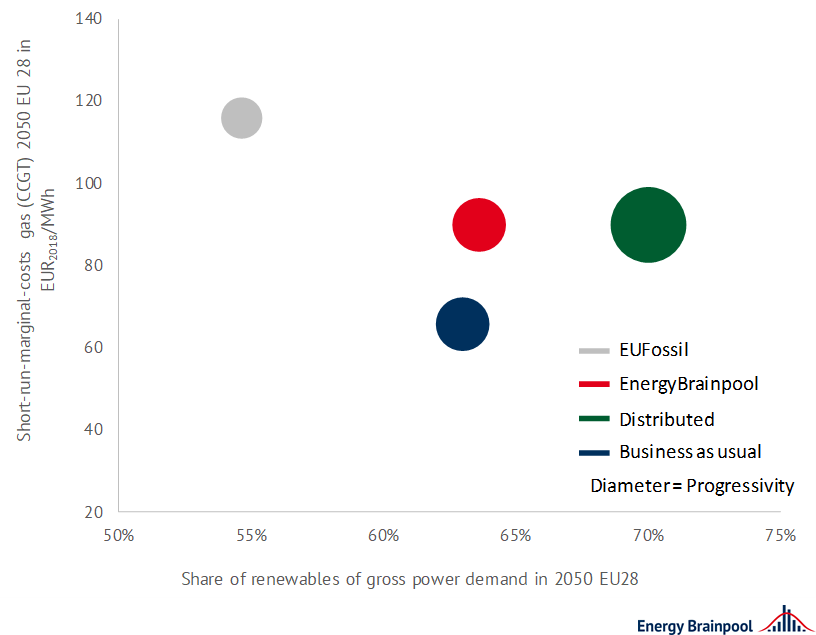 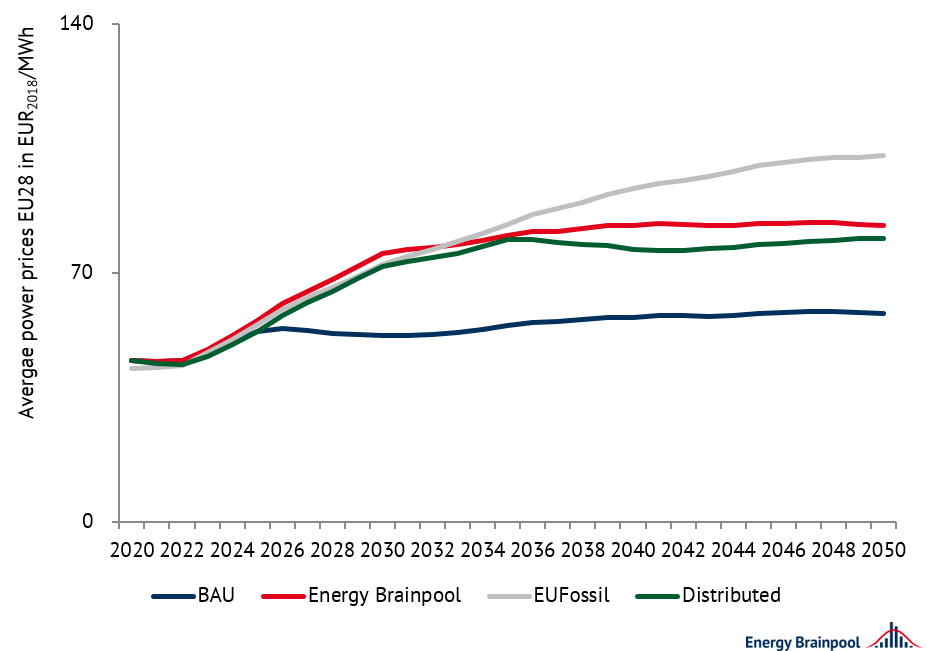