With the draft of the Coal Exit Law, the Federal Government has not only put the tender procedure for the shutdown of coal capacities on paper. At the same time, changes were announced for renewable energies. According to the International Energy Agency’s World Energy Outlook 2019, global CO2 emissions might rise until 2040. In terms of prices, November continues where October left off: going down.

Coal exit law with many changes

In the first half of November, the draft of the Coal exit law (Act on the reduction and termination of coal power generation and on amending other acts) became public. Accordingly, the draft not only establishes coal phase-out regulations, but also some changes for renewable energies and grid operation.

According to the draft, the first hard coal shutdowns will take place in November 2020. On 1 June 2020, the first tender for power plant capacity that can be switched off will take place. The Federal Network Agency will then publish the results of this tender on 1 October 2020. Above all, the subsequent invitation to tender will then take place in 2022 (source: Montel).

In the tenders, the hard coal-fired power plant operators will be able to indicate a price for shutting down their capacities. A maximum price for the compensation payment is not yet known. The tender volume for the first tender in 2020 is to be 4 GW net nominal capacity.

At present, 20.5 GW of hard coal capacity is still on the grid, while the capacity of German lignite-fired power plants on the market stands at 18.1 GW. By the end of 2022, the hard coal and lignite capacity is to be reduced to 15 GW each. Figure 1 shows the planned shutdown of coal capacities in Germany by 2038. 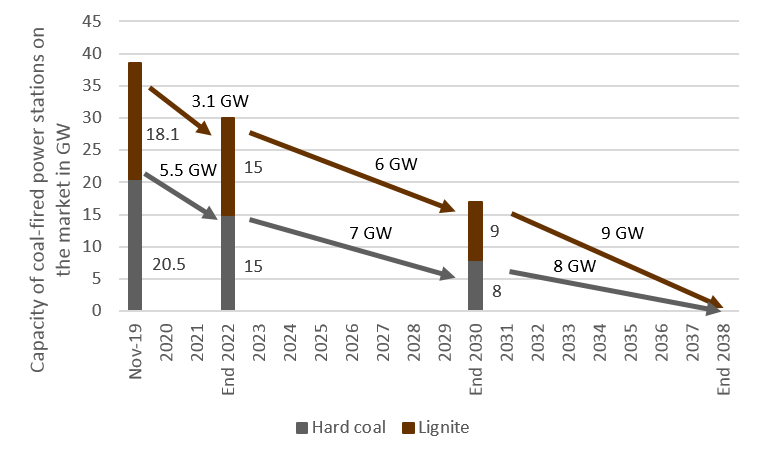 However, the draft law does not include any measures if not enough capacity is being registered in the tender. Furthermore, the transmission system operators will check whether a power plant is systemically relevant before being awarded in the tender. Such an evaluation will lower the chances of a certain power plant to succeed in the tender (source: Montel).

If the power plants are shut down due to other circumstances, such as economic considerations due to losses on the electricity market or increased emission guidelines, the tenders would be cancelled, according to the draft law.

While the tender for the shutdown of hard coal is to be market-based, the chapter on lignite phase-out is still empty. The Ministry of Economic Affairs is currently negotiating with the relevant power plant operators (source: Erneuerbare Energien, Montel).

The draft coal phase-out law also describes changes for renewable energies. The 65-percent target for the share of renewable energies in gross electricity consumption in 2030 will now also be anchored in the Renewable Energy Sources Act (EEG). However, the target is linked to preconditions: Accelerating the approval procedures for grid expansion and the construction of renewable energy plants.

The offshore expansion target in the Wind Energy at Sea Act for the year 2030 will be increased from 15 to 20 GW. However, the corresponding grid capacities are also a prerequisite here. On the other hand, the privilege of citizen energy companies in tenders for onshore wind energy will no longer apply.

Only approved projects are allowed to participate in the tenders for onshore wind turbines. The distance regulation of 1000 metres to settlements was also adopted from the climate package (source: Erneuerbare Energien).

The 52 GW expansion cap for PV is lifted. This means that new plants with an installed PV capacity of over 52 GW can also be financially supported by the EEG. In the future, however, all operators of solar PV systems will be obliged to limit the feed-in capacity into the grid to 70 percent of the maximum capacity.

This regulation is to apply to systems which are not regulated by the grid operator. In short: Operators who do not consume the electricity from their PV systems themselves might have to accept losses in their remuneration as a result of this regulation (source: PV Magazine).

Timetable for energy and climate legislation

The coal exit law might not be passed until 2020. According to PV Magazine, the most recent draft bill of 26 November 2019 does not contain any of the provisions for renewable energies any longer. A separate legislative procedure is to be launched for this purpose (source: PV Magazine). It remains to be seen whether the necessary changes will be adopted this year.

In contrast, the Climate Protection Act and the National Emissions Trading Act might still be passed by all authorities before the end of the year (source: Energate).

On 15 November, for example, the Bundestag approved the draft law on the climate package (law for the introduction of a federal climate protection law and amendment of further regulations) with the votes of the grand coalition and against the votes of the opposition.

At the end of November, the Federal Council also approved the National Emission Trading Act and parts of the Climate Protection Act. The former contains the regulations on the trading system and certificate prices for emissions from fossil fuels in the transport and heating sectors (source: Montel).

However, the parts of the Climate Protection Law dealing with taxes have been put to discussion again. In particular, it deals with the increase of the commuter allowance, the lowering of the value added tax for train tickets and the tax aids for building renovation, . The mediation committee of the Federal Council and the Federal Parliament will deal with these topics during the upcoming weeks (source: Montel).

Certainly, emissions in the EU-ETS could fall by up to eight percent in 2019 due to weaker economic performance and higher gas generation. This would correspond to the largest reduction in EU-ETS emissions in tenyears (source: Montel).

However, the International Energy Agency sees rising emissions in its annual World Energy Outlook 2019 (source: IEA). The central scenario of the Paris organization “STEPS” (Stated Policies Scenario) shows the effects of the current national laws and plans up to 2040. According to this scenario, global energy demand would increase by one percent annually by 2040.

Almost 50 percent of this increase would be covered by renewable energies. Figure 2 shows the increase in energy consumption from various energy sources until 2040 according to STEPS (source: Carbon Brief). 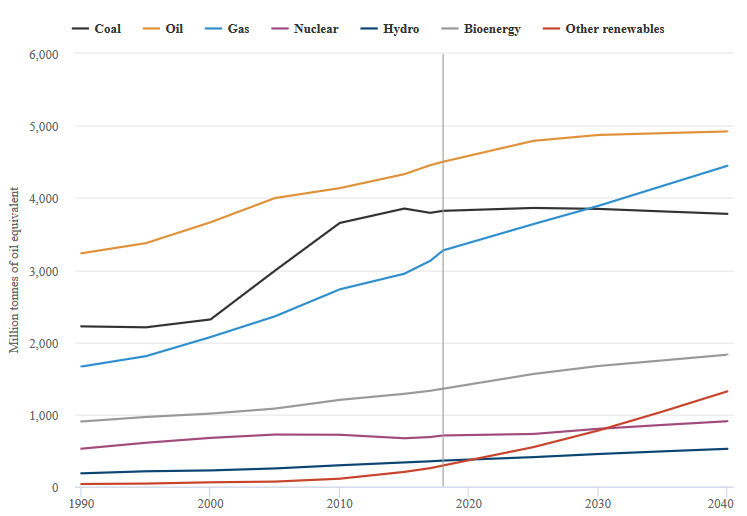 Figure 2: energy consumption by energy source until 2040 in the STEPS scenario of the World Energy Outlook 2019, source: Carbon Brief

Accordingly, it is hardly surprising that global CO2 emissions continue to rise, reaching almost 38 Gt CO2 in 2040. In contrast, CO2 emissions in the Sustainable Development Scenario (SDS) of the IEA would fall by 48 percent compared to 2010.

Only in the latter scenario would it be possible to limit the rise in temperature to 2 degrees Celsius by the end of the century.

At the long end, weaker quotations for CO2-certificates also depressed the price of electricity. Thus, the price for the front year baseload Germany fell from over 46 EUR/MWh in the beginning of November to below 45 EUR/MWh during mid of the month. At the end the month it landed at just under 45.5 EUR/MWh.

Bearish signals from EUAs due to lower consumption forecasts played an important role here. As in October 2019, the prices of almost all commodities declined. Figure 3 shows the price development of the electricity front year Germany in October and November 2019.

On the spot market, low solar generation and, during some periods, low wind generation led to increased feed-in from fossil power plants. In particular, generation in hard coal-fired power plants increased by 2 TWh compared to the previous month.

The German electricity balancing market in transition – part I