12. September 2017 / Angela Pietroni / Comments Off on The Coal price is the key!
Analysis: Energy Economy, Prices

Therefore the correlation of gas, hard coal and CO2-prices with the electricity price is an interesting indicator for the energy sector. In the following this correlation is examined in detail.

For the analysis future prices of the respective front-year contract for electricity [1], gas [2], hard coal [3] and CO2 [4]  starting from 2008 have been taken into account. The fuel and CO2-prices have been converted into ”Clean Coal“ and ”Clean Gas“. As a combination of fuel costs and specific CO2-costs [5] of the respective energy carrier, these two figures reflect the short-term marginal costs of average power plants at the future markets. Figure 1 depicts the course of those figures from 2008. Basically, electricity prices and (clean) fuel costs show a similar development. The price development of Clean Coal and Clean Gas is however not running in parallel. When just looking at fuel costs, without CO2-costs, a similar effect can be recognised. The price advantage of Clean Coal compared to Clean Gas varies from 2 to 20 EUR/MWh (compare figure 2). 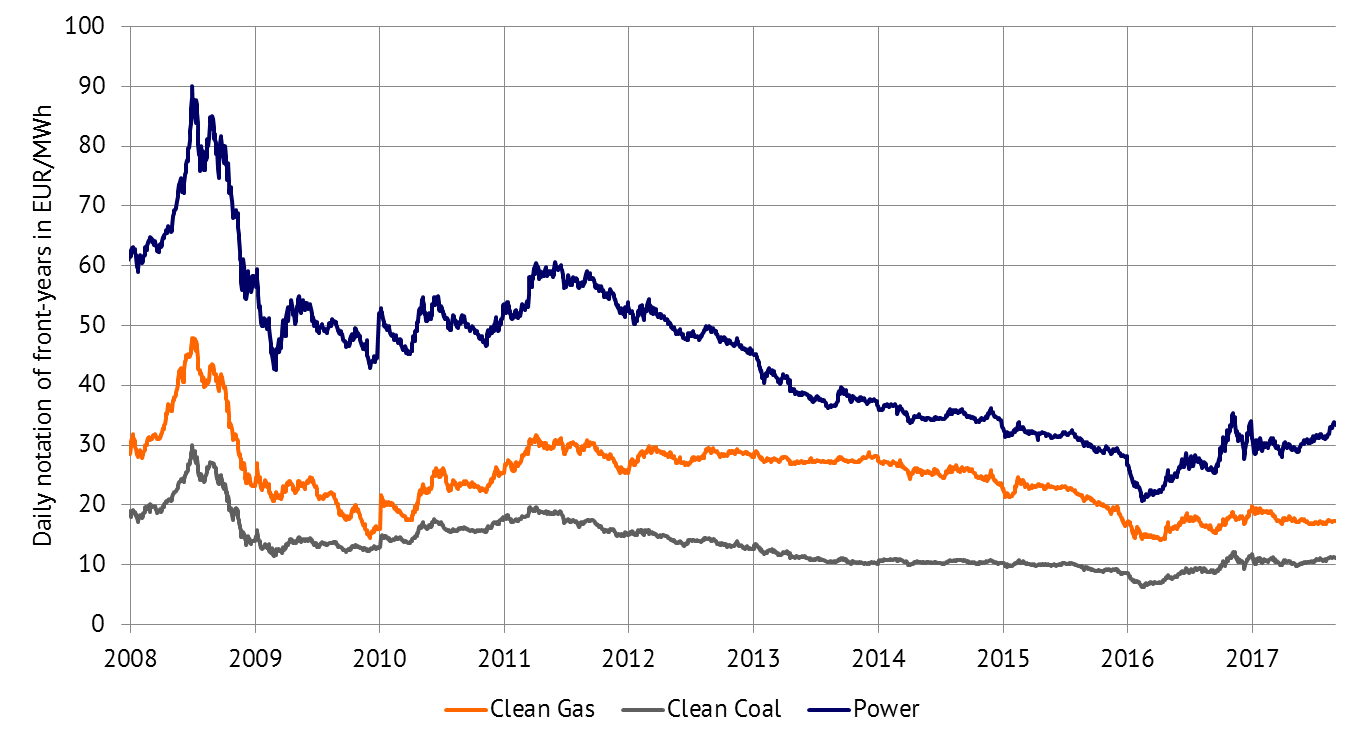 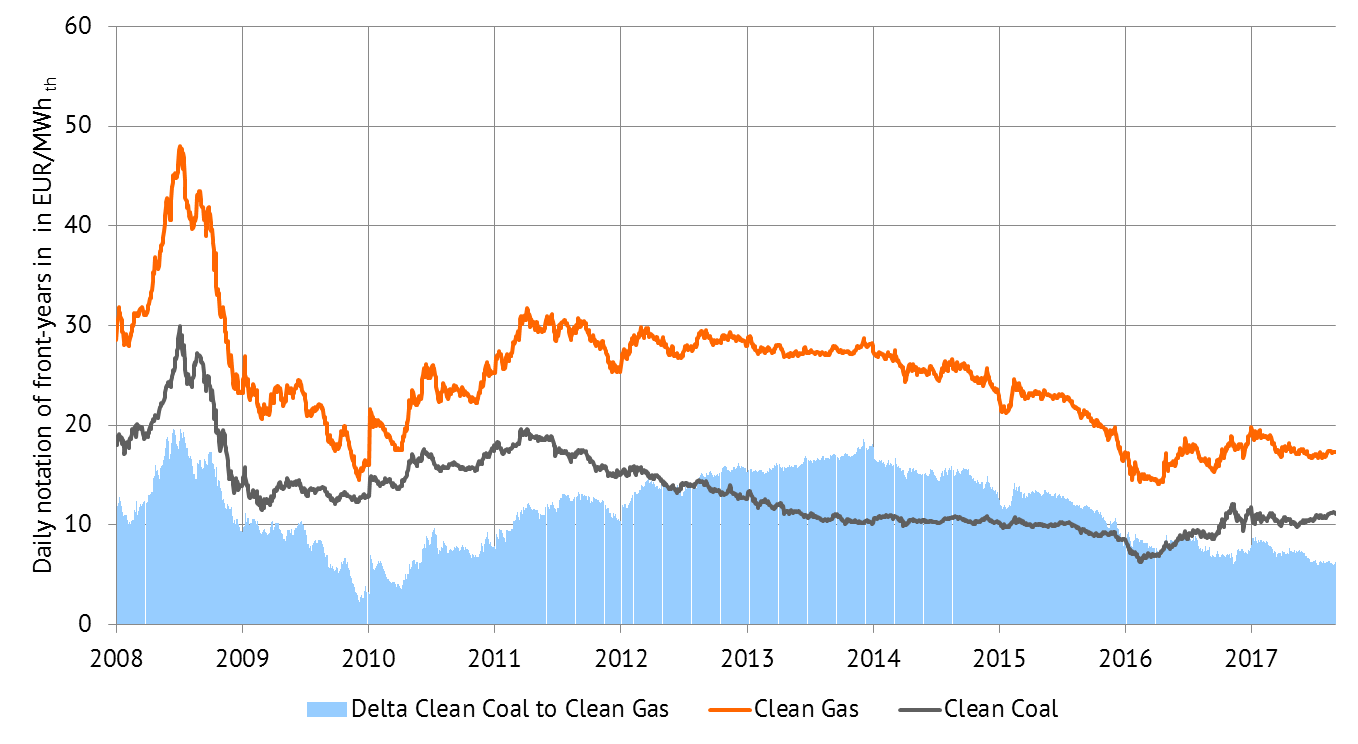 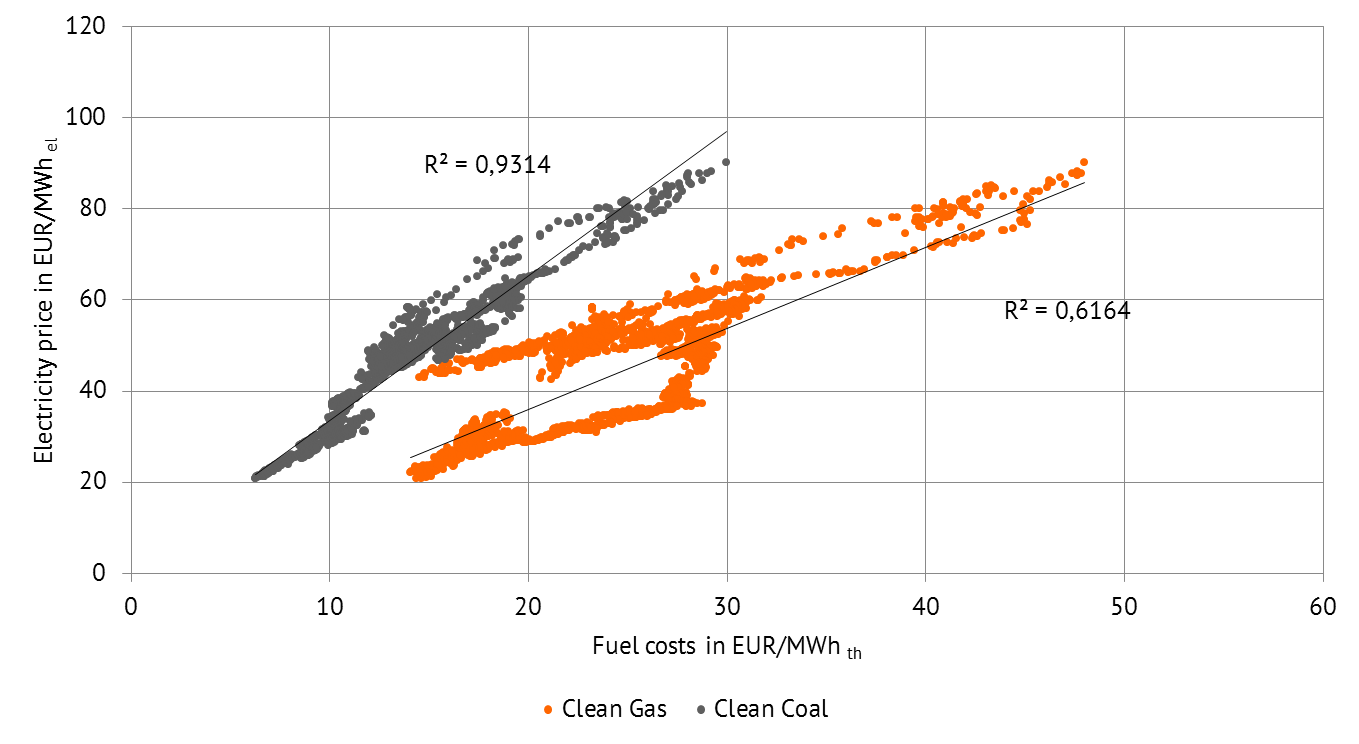 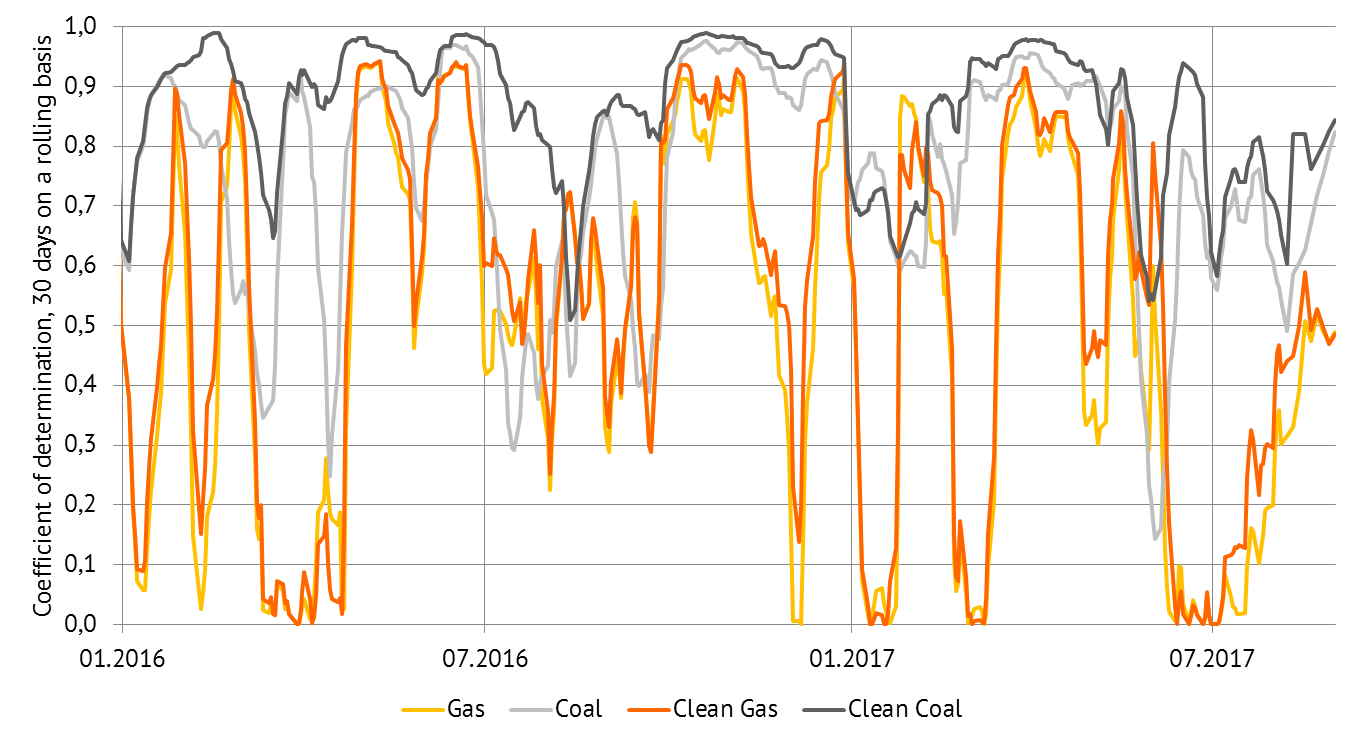 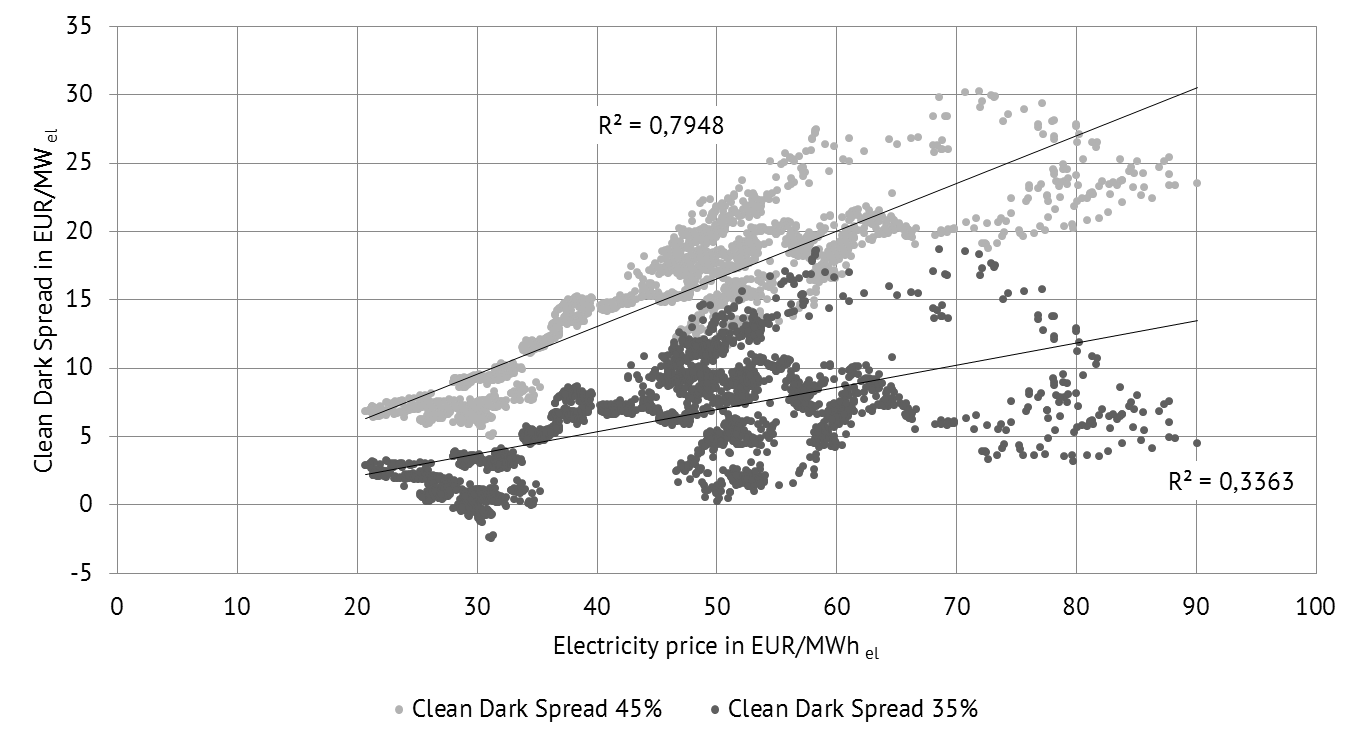 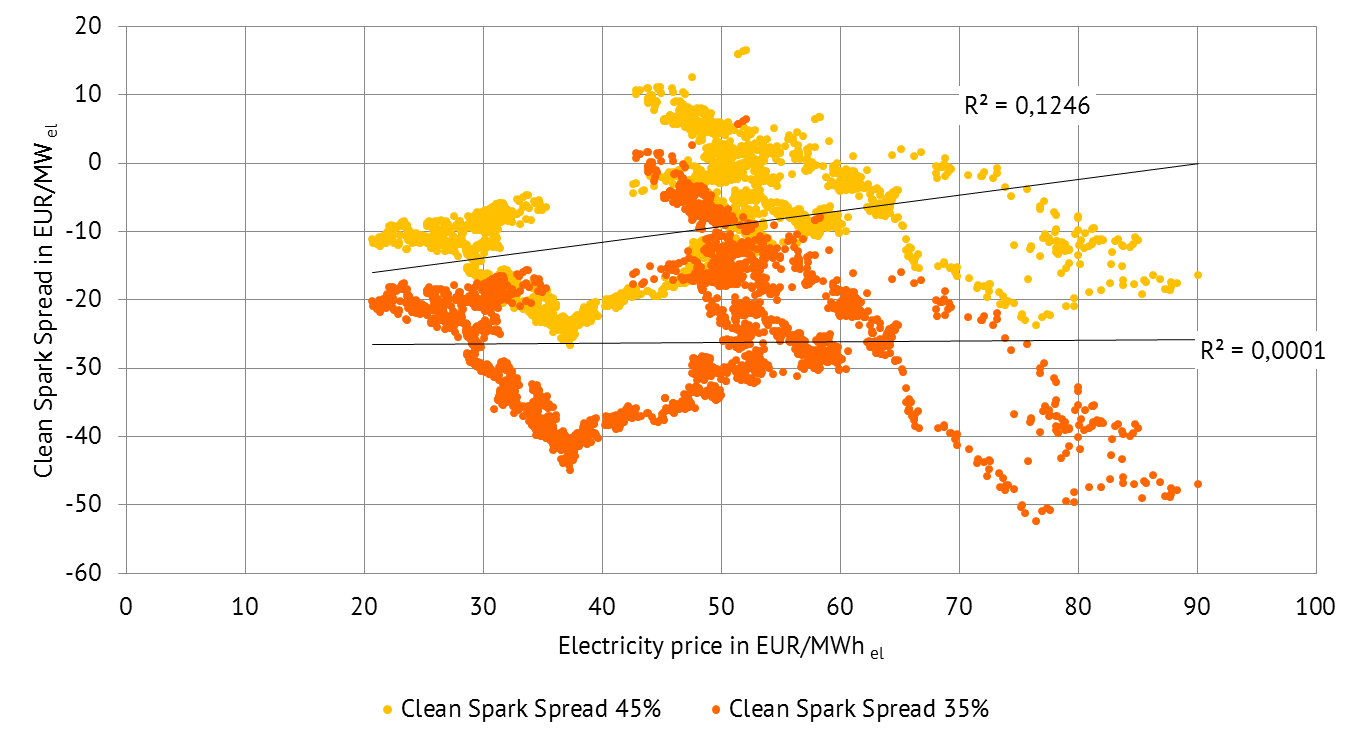 What’s the take-away for the future? The nuclear phase-out in Germany until 2022 will lead to a shortened merit-order of the conventional power plant. Depending on the expansion of renewables, the frequency of use of gas-fired power plants, which might then move down the merit-order, could increase. Eventually, the effect of Clean Gas on electricity prices might be enhanced. The political and societal discussion on a coal phase-out would even accelerate this phenomenon.

[3] API2, converted from US-$ into EUR on the basis of corresponding exchange rates at a certain time

[6] here: 30 days on a rolling basis, formula: Coefficient of determination