August 2017 was characterised by the second tender for wind-onshore, the subsequent discussions about citizen energy companies and the significantly decreased price level. Despite the summer break, electricity prices have been increasing at the long end of the curve.

When the Federal Network Agency published the outcomes of the second tender for onshore-wind on 15th of August 2017, the expectations of many observers have been exceeded. The average result was 4.28 cent/kWh and, therefore, a quarter lower than the first tender’s average of 5.71 cent/kWh in May 2017. The second tender was oversubscribed by almost the factor 3, whereby 67 bids (1013 MW) were approved. The project developer UKA received 690 MW approved bids. However, only 30 MW of its project needed an approval according to the Federal Immission Control Act to be part of the tender. The remaining 630 MW were privileged as citizen energy companies (Source: Energate).

In general, citizen energy companies were once again the winners with a success quota of more than 90 per cent. The fear of a plunge in the expansion of wind energy is growing steadily both within the industry and also in politics. As citizen energy companies are permitted to realise their projects up to 54 months after they successfully participated in a tender, this could lead to a significant decline in capacity expansions from 2019 onwards. For instance, the Ministry of Economic Affairs, Labour and Transport of Lower Saxony, together with a number of associations and companies, has published a position paper on the modifications of the framework conditions for upcoming tenders for onshore-wind. According to the current status-quo, the maximum permitted bid value will be 5.44 cent/kWh in 2018’s onshore wind tenders as shown in figure 1. 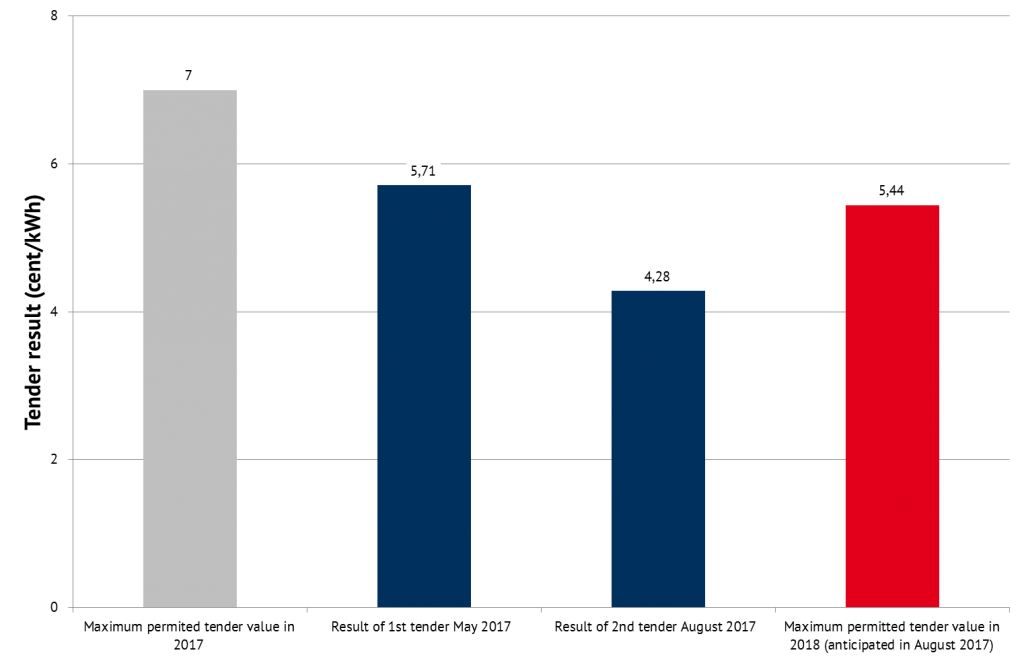 The winner of the tender in August 2017, on the other hand, speaks of reliable calculations for the bids, although UKA also considers a modification of the tender design to be necessary. The advantages for citizen energy companies will lead to a permanent distortion of competition, which disadvantages non-citizen energy companies (Source: Energate).Large German telecommunication provider is entering the electricity business

New competition is also entering the traditional distribution business of utilities. Deutsche Telekom with more than 40 million customers in the mobile phone segment is entering the electricity retailing market. Even if the sales of “Strom Smart” was started as a trial, it could become a permanent offer if successful. With more than 750 Telekom stores, the company can also rely on a large sales network. According to Telekom, “Strom Smart” is always cheaper than the regional basic supply tariff and, at the same time, a green electricity product, which is redeemable on a monthly basis (Source: Energate).

There were some developments on the price side in August despite the summer break and the holiday season. The 32 EUR/MWh mark for 2018 contracts was cracked in the first half of August due to higher coal prices of just fewer than 78 USD/ton. Coal prices increased mainly due to supply restrictions in Indonesia and the higher demand in China. In the second half of August, the French Nuclear Regulation Agency directed new investigations into the French nuclear reactors. In the view of the past winter and its shortage situation, these news led to a further increase of the annual baseload contract for 2018. The contract reached its peak at 33.8 EUR/MWh. At the same time CO2-prices rose to 6 EUR/ton. The low liquidity during the summer break was mentioned as the reason for the increasing price as well. Figure 2 shows the prices for base load power supply for 2018 during the trading period July to August 2017 (Source: Montel). The increase in August becomes apparent.

Figure 2: Prices for base load electricity in Germany 2018 during the trading period July to August 2017, Source: Montel

In the short-term market relatively high spot market prices were common when there was low feed-in from fluctuating renewable energies. The average base load day-ahead price settled just below 31 EUR/MWh in August, as shown in figure 3 (Source: Epex Spot)

An exception was the weekend of 19th and 20th of August when high wind and solar production combined with low demand caused up to five consecutive hours below 0 EUR/MWh. Figure 4 shows the feed-in of the different generation technologies during August 2017 (Source: Energy Charts). The above mentioned weekend is clearly recognisable.