The call for a coal exit in Germany is getting louder

31. January 2017 / Simon Göß / Comments Off on The call for a coal exit in Germany is getting louder
CEENews: Coal Market, Energy Economy, Energy Policy, Europe

Within a short amount of time the Green party, the German Federal Environmental Protection Agency and the WWF have expressed the opinion that the phase out of coal energy should begin soon. Different groups and players have said and proven with scientific papers that without an ambitious plan to get rid of coal as a source of energy Germany’s climate goals cannot be fulfilled.

The amount of electricity produced with coal dropped by about one percent in 2016 compared to 2015. Still though, there is no general consensus in society on the topics, climate protection, changing structures and supply reliability, which would gain importance in view of a coal exit in Germany. For the Green party it is very clear: the 20 most dirty power stations, with a total installed capacity of 8 GW need to be taken off the grid as soon as possible in order for Germany to achieve its environmental goals (Source: Montel). The power supply from coal in Germany should then end within the next 20 years. Coal power stations produce almost 80 percent of all the CO2 emissions in the German electricity sector (Source: WWF). Figure 1 shows the different production sites where coal power stations are located in Germany and the amount of installed capacity they have at each site (500 to 3000 MW). 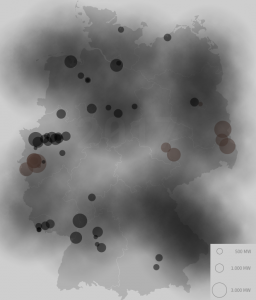 Also the German Federal Environmental Protection Agency (UBA) assumes in its study „Klimaschutz im Stromsektor 2030“ that a 50 percent reduction in greenhouse gas emissions in the energy sector – goal of the climate protection plan till 2050 – until 2030 is only possible if less than half of the electricity coming from coal power stations at present is produced in 2030. The UBA sees 4 options for the legislator to achieve this by 2030.  The decommissioning of the oldest lignite an coal plants (a reduction from 55 percent and 60 percent of the installed capacity), gradually turning off CO2-intensive lignite plants (reducing installed capacity by 75 percent), introducing a national CO2 -price (raising the costs of producing one ton of CO2 by 10 Euros) or by restricting the amount of hours a lignite or coal power station is allowed to run to a maximum of 4000 hours a year (Source: Montel). An estimation on the impact of a national price floor of CO2 on German emissions and its power plant fleet is shown here.

A study released by the WWF hints in a similar direction. The study which was produced by the Öko-Institut and Prognos calls for the shutdown of all coal fired power stations older than 30 years by 2019. By doing this emissions could be reduced there by 88 percent. In order to do this, about 50 percent of all coal power stations would have to be shut down by 2019, equivalent to a capacity of more than 23 GW. (Source: Montel). The rest of the coal power stations would then follow by being taken off the grid by 2035. The time plan of necessary shut-downs according to the WWF study can be shown in figure 2.

Figure 2: Reduction of generating capacity of lignite and hard coal with a systematic decommissioning until 2035 (source: WWF)

At the same time as the amount of electricity produced from coal in Germany declines, an equivalent amount of CO2 emission allowances has to be taken out of the emission trading system. Otherwise there will be no incentive to save energy in other sectors, for example the industry. The president of the UBA, Maria Krautzberger made clear that the change in electricity prices would be very moderate: “Wholesale prices would rise by a maximum of 0.2 Cent per kilowatt-hour”. Furthermore, a reduction in electricity production from coal power stations in Germany would also lead to less net electricity exports into neighboring countries by 2030 (Source: Montel). An analysis commissioned by Agora Energiewende shows similar results: An electricity system based on 95 percent renewables would cost about 64 Billion Euros in 2050. These costs include production units, the grid and storage capacities and would be cheaper than the average costs of a fossil fuel powered system which would cost a total of 67 billion Euros. The average costs for the fossil fuel powered system was calculated with 12 different scenarios.

The only leading player and participant in the debate who has not yet given a clear signal and date about when Germany should get rid of coal is the Federal Ministry of Economic Affairs and Energy. In  view of its former Minister Sigmar Gabriel, the question when Germany should stop using lignite to create power is to be answered by a commission from 2018 onwards. It would be more credible to decide a date on which the energy transition and plans to substitute the amount jobs is being evaluated. In this context the year 2030 was mentioned. (Source: Montel).

What is certain is: The reduction of greenhouse gas emissions can only be achieved if Germany stops producing power with coal. If Germany wants to reach its own climate goals and fulfill the promises it pledged at the climate conferences in Paris and Marrakech, then these goals will only be possible if the country will find a quick decision on the exit from coal.