Germany as a central hub of the European power trading is a net electricity exporter. A detailed analysis however reveals pronounced differences between Germany’s electrical neighbors, as well as between commercial schedules for power trade and actual physical power flows in the grid.

Similarly to the past years Germany has also been a net exporter of electricity in 2015 and 2016. While the export surplus from electricity trading stood at 34.5 TWh in 2014, the exports rose to more than 50 TWh in 2015 and 2016, thus almost reaching 10 percent of the country’s power consumption (Source: Bundesnetzagentur, Fraunhofer ISE).

The average available cross-border transmission capacity to neighboring countries almost reaches 20000 MW, where the largest capacities – both ways – are technically available towards Switzerland (4000 MW), France (2400 MW) and to the Netherlands (2200 MW). Grid-related reasons however do not allow the utilization of all capacities at the same time.

In the liberalised power markets of most European countries electricity trading and grid operations are separated, where the majority of the former is conducted one day in advance (Day-ahead). In order to allow for such trading, market areas –presumably areas where the flow of electricity is not hindered due to grid bottlenecks – are defined. An example is the single market area and price zone Germany-Austria. Compared to the Day-ahead trading, significantly less amounts of electricity are being traded during the continuous Intraday phases. Thus, the day-ahead schedules for cross-border electricity exchange are appropriate indicators for power trading between the countries.

At the time, when electricity actually has to be delivered, power plants generate electricity according to the amount of electricity that has been traded before. The grid operators have to transport the electricity to the load centres. Due to bottlenecks within the market areas or price zones (North-south Germany) this is not always possible in its entirety. If the electricity cannot flow through a grid bottleneck, it will in accordance to the laws of physics take the way of least resistance: in general this means through the power grids of the neighboring countries.

Due to that there are many cases where a considerable gap between cross-border commercial schedules and actual physical flows of electricity through the power grid across national borders can be observed. Figure 1 depicts the annually cumulated net of physicals flows and commercial transactions (Data source: Bundesnetzagentur, Entsoe) between Germany and its electrical neighbors from 2013 to 2015.

The laws of physics – electricity flows according to Kirchhoff’s Laws always towards the lowest resistance – impressively demonstrate their victory over commercial power trading, and thus also over the idea of a European copper plate in the examples of France, Poland and Austria. In those three countries the physical electricity flows through the grid deviates dramatically from the cross-border commercial schedules.

In figure 2 (own representation) the net of commercial schedules and physical power flows between Germany and its neighboring countries in 2015 are shown (Quelle: Bundesnetzagentur). While almost 10 TWh of electricity has been sold from Germany to France over the course of 2015, the actual net power flow constitutes an import of 11 TWh from France to Germany. In that case the results of power trading are diametrically opposed to actual power flow in the grid. 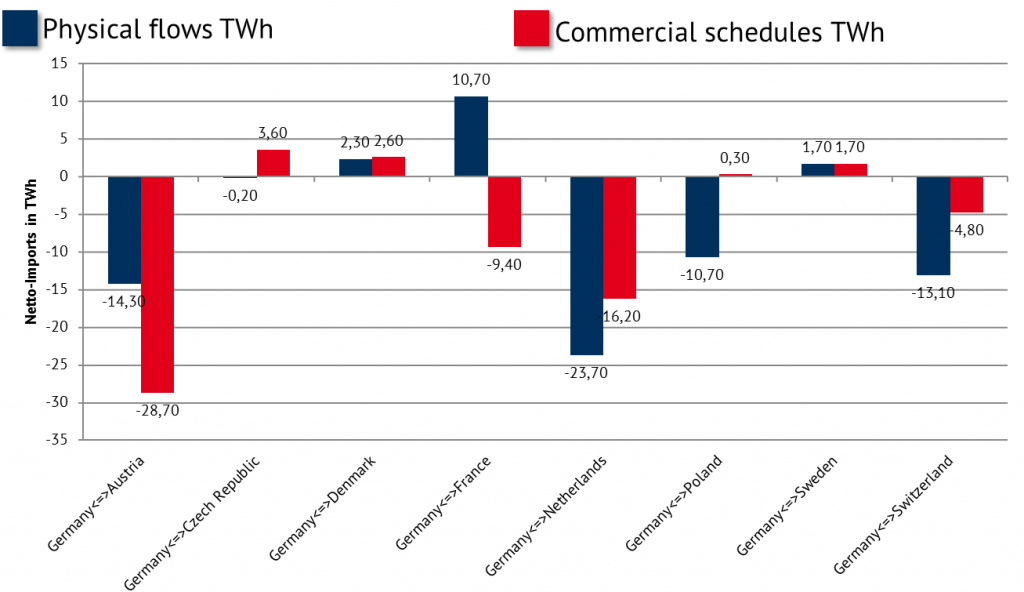 Figure 2: Cross-border physical flow (blue) and trading flows (red) between Germany and its neighbors in 2015 in TWh (source: Energy Brainpool)

A quite similar phenomenon, just in the opposite direction, can be attested to power flows between Germany and Poland. Between those two countries commercial power trading is basically non-existent. However, if there are strong winds in Germany, renewable electricity from wind parks in the north and east of Germany, is primarily flowing to Poland, as it cannot find a way to the south of Germany (and to Austria) through Germany proper. Those so-called loop-flows of electricity via Eastern Europe have also led to the decision of separating the single price zone of Germany and Austria, as well as of introduction congestion management at the German-Austrian border by the Agency for the Cooperation of Energy Regulators (ACER).

A grid bottleneck, mainly due to delayed grid extension and expansion, is for a larger part to be found within Germany, and not primarily at the border to Austria. Still it can be inferred from figure 2 that in 2015 almost 30 TWh of electricity have been traded from Germany to Austria. However, the actual physical power flow could only realize about half of this amount as power exports to Austria.

Renewable energy and the grid expansion in China

The call for a coal exit in Germany is getting louder