Renewable energy and the grid expansion in China

The expansion of renewable energy power stations happens at a faster rate than the electricity network is being built up. The curtailment of wind energy is therefore often the rule instead of the exception.

Until the year 2020 the installed generating capacity of renewable energy in China should amount to 680 GW. These renewable power stations are expected to generate a total of 1900 TWh per year. This would equate to 27 percent of the annual power generation in China at that time, and to about three times the German annual electricity consumption. Even though the plans for the expansion of renewable energy within the next 5 years in China are not as ambitious as expect earlier, they dwarf those of all other countries.

Wind energy capacity is meant to increase to 210 GW resulting in an annual electricity generation of 420 TWh. This would double the amount of electricity from wind in China and constitute an increase from around 3 percent to around 6 percent of total China’s total electricity consumption. Electricity generation from hydro power and biomass in 2020 is expected to rise by 150 TWh to a total of 1250 TWh and by 38 TWh to 90 TWh, respectively.

Currently, wind turbines are mainly erected and connected to the grid in the northwestern provinces. This especially poses problems, as the electricity generated there cannot be transported to the load centres in the East of China. A lack of ultra-high-voltage lines causes curtailment of up to almost 40 percent of the potentially generated electricity from wind in some provinces, such as Gansu.

Ultra-high-voltage direct current (UHVDC) power transmission lines might be one of the solutions to this wastage. China already expands its ultra-high-voltage grid in order to transmit electricity from sparsely populated provinces in the west to the centres of consumption at the east coast. Figure 1 depicts China’s UHVDC projects (Source: The Economist). Since 2010 a UHVDC power line with a voltage of 800 kV transmits electricity from the Xiangjiaba hydro power station in the southwestern province of Yunnan to the coastal metropolis Shanghai. It has a transport capacity of 6400 MW, representing about the average of Rumania’s entire power demand. Another line which is already in operation since 2013 transports the electricity from hydro station along the Yalong river in the western province of Sichuan to the province Jiangsu at the coast. The Jinping-Sunan UHVDC-line has a capacity of 7200 MW. 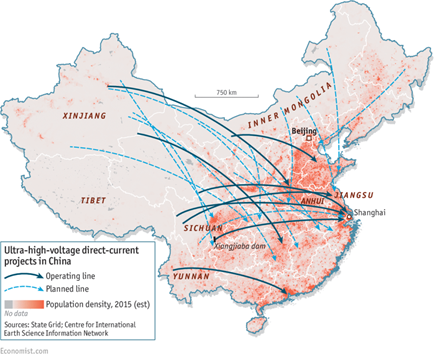 By date the largest UHVDC project, the Changji-Guquan link is currently being constructed. With a power transmission capacity of 12000 MW (an equivalent of 12 big power station or roughly 20 percent of the average German grid load) and operating voltage of 1100 kV this power line eclipses all other UHVDC projects. When finished, this interconnector will transport electricity from the northwestern autonomous region Xinjiang to Anhui province almost 3300 kilometres to the East (Source: Siemens).

According to the plans of the Chinese grid operator State Grid, the construction of 23 point-to-point UHVDC interconnectors is expected to be finished in 2030. Simultaneously these power lines are to be integrated into an Asian Super Grid – yet to be built –, transporting electricity from Siberia to the Korean capital of Seoul (Source: The Economist).