Article sources with kind recommendations of the Sino-German Energy Partnership of GIZ on behalf of the Federal Ministry for Economic Affairs and Energy (BMWi).

For renewables less capacity additions are anticipated, also due to difficulties in utilizing the fluctuating feed-in of electricity, leading to curtailment of roughly 15% of generated electricity by wind and PV during the last years. The detailed plan for the expansion of renewables by 2020 foresees 210 GW of wind capacity, including 5 GW offshore wind, thus being lower than the targets communicated last year (250 GW). The expansion of solar energy is to be reduced on an even greater scale. Compared to last year’s announcements of the installation of 150 GW, the current plan sees only 110 GW of solar to be installed by 2020. This includes 5 GW of concentrated solar power plants and 60 GW of decentral power generating capacities. Figure 1 shows planned capacities of different technologies for 2020 in GW. 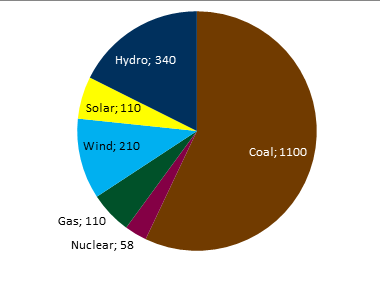 Accordingly, the 13th FYP for energy aims to reduce curtailment of electricity from renewable sources from current levels to less than 5%, which would be an important step forward and actually has more value than the further addition of capacity as this excellent article explains.

In 2016 wind power in China already experienced less investment, more than 29% less investments during the first three quarters of 2016. However, total installed wind capacity still rose to 140 GW, while yearly full load hours went down by 5% to 1250. Compared to the full load hours of German wind turbines in 2015 this is 550 hours less and mainly due to the shut-down of wind power to keep the grid stable in the north-western Chinese provinces. For solar PV on the other hand, the target of about 18 GW of capacity addition in 2016 will probably be exceeded by 12 GW, as 26 GW have already been installed during the first 9 months. A big part of this capacity expansion was due to project developers wanting to install bring their projects online ahead of the feed-in tariff reduction in the end of June.

White Paper: The effect of a CO2 price floor in Germany