Similar but different: The energy systems of Italy and Spain

After comparing the German and French energy systems, we now look at the number three and four in the EU: Italy and Spain. Both countries have a power plant fleet and electricity generation of similar size. However, Italy’s power generation is based on natural gas, while Spain generates larger shares of its electricity from wind power and nuclear power. A look at the figures below reveals similarities and differences.

Italy is the third largest country in the EU in terms of economic output and population, while Spain is the fourth largest. For this reason alone, Italy’s primary energy consumption is higher than that of Spain. However, the difference between the two countries is not as pronounced as between Germany and France. The comparison of the latter two can be found here. 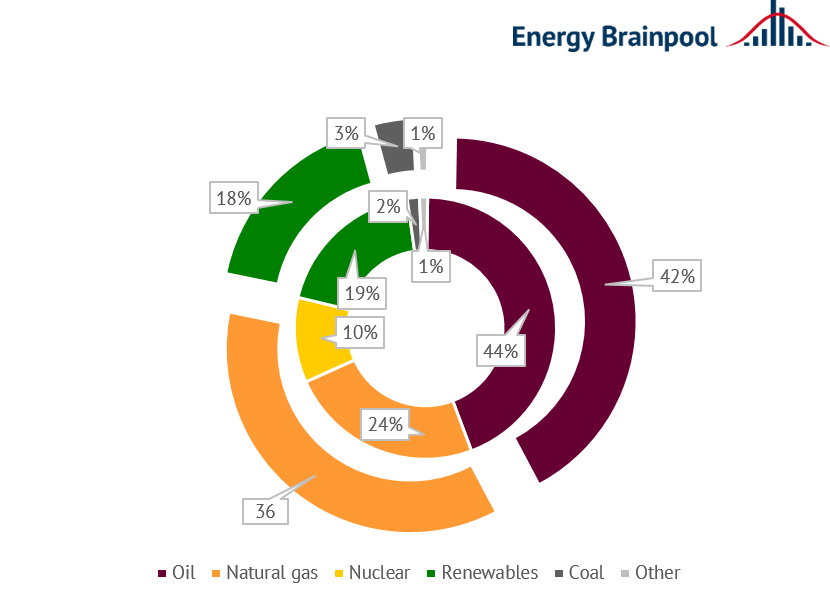 Differences in 2020 were mainly in nuclear power, which accounts for 10 per cent of Spain’s energy consumption but plays no role in Italy. The use of gas, on the other hand, is more prevalent in Italy than in Spain, at 36 per cent. Coal as an energy source plays only a minor role in both countries.

In 2020, the CO2-emissions (production-based) of the two countries were 304 million tons in Italy and 209 million tons in Spain (source: ourworldindata.org). Since peaking around 2005, emissions from fossil fuel combustion have fallen by almost 6o per cent in both countries. A major contributor to this was the Corona pandemic in 2020, but also the decline in coal-fired power generation in both countries, as well as the increased use of gas instead of oil in industrial processes. A per capita comparison of the two countries also shows the similarity: 5 tons per year in Italy and 4.5 tons per year in Spain. 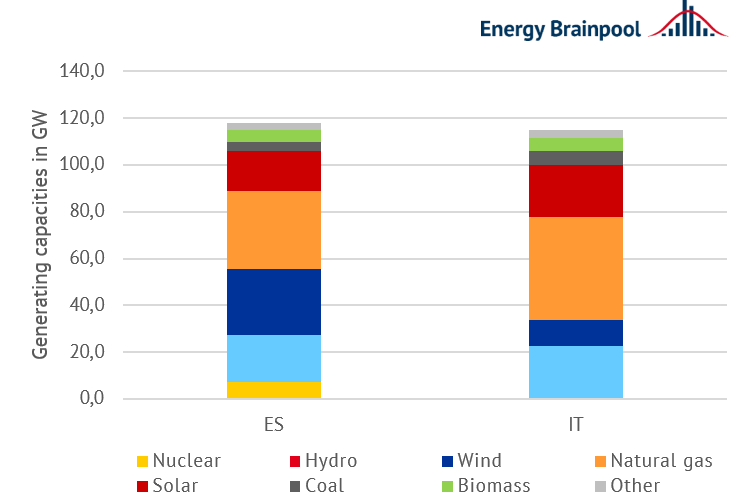 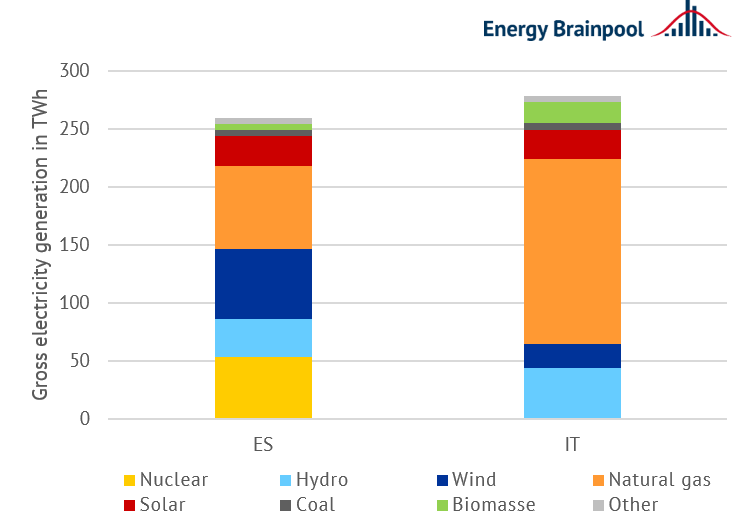 Renewables generated over 40 per cent of electricity in both countries in 2021, with Spain having a higher share especially. This is due to a generation of 60 TWh from wind power compared to only 20 TWh in Italy.

The dependence on fossil fuels is currently particularly evident due to the war in Ukraine and the possible halt in the supply of coal, oil and gas from Russia. Both Italy and Spain are planning to phase out coal generation. For example, the Spanish coal-fired power plants are to be shut down by 2030 at the latest, and the Italian ones by 2025 (source: Euractiv, IAI). However, Italy’s high dependence on Russian natural gas is currently upsetting these plans. An extension of the lifetime of coal-fired power plants is under discussion there (source: ansa).

The generating capacity of renewable energies is to increase strongly in both countries. In Spain, large PV parks are already being financed and installed with the help of PPAs (source: PV Magazine). In Italy, too, more money is to flow into the expansion of renewables (source: Reuters).

Therefore, despite some differences in electricity generation, both countries are on the verge of phasing out conventional power plants and pushing forward the addition of renewables.