April showers bring forth May flowers? – the energy industry in May 2018

21. June 2018 / Simon Göß / Comments Off on April showers bring forth May flowers? – the energy industry in May 2018
Series: Blockchain, Commodity markets

May 18 review: Still no clarity on special tenders and the German coal commission. On the other hand, more news on blockchain projects, slump in the onshore wind tenders, while there is only one direction on the price side: Bullish upwards.

By the end of 2018, the first proposals and elaborations of the Coal Commission, officially “Commission for Growth, Structural Change and Employment” are to be submitted. The ones familiar at what speed the mills in such commissions grind, also know that the timeframe is thoroughly ambitious, especially on this subject. However, the Coal Commission would have to exist first. It is still not in place at the end of May after almost two months of coordination and discussion within the federal government.

The Greens in the opposition demand that the number of coal blocks to be shut down should be determined at the very beginning of the Commission’s work (source: Energate). Whereas the lignite states of Germany see security of supply and financing of structural development measures in the lignite areas as the main topics (source: Energate). However, it is not yet clear who will be ultimately sitting in the Commission and setting the tone. From trade union federations to renewable energies associations, everyone wants to have their say and contribute their visions.

Structural change versus concrete date for phasing out

At least, Federal Environment Minister Schulze has positioned herself more clearly by considering structural change in the regions as more important than a concrete date for phasing out coal (source: Energate). There has also been an official mandate for the Coal Commission since mid-May. However, the two-pager makes clarifies that climate protection is rather a subordinate goal. The official mandate declaration only mentions the topic of an end of coal in the penultimate of the six working orders. The German climate target for 2020 is also no longer considered achievable. However, the Commission should also propose measures to be included in a programme to implement the climate change plan for 2030. Measures to reduce the climate protection gap in 2020 should also be available in time for the 24th UN Climate Change Conference in early to mid-December 2018.

In May 2018, the German cabinet decided to establish the Commission as a 23-member body. Firstly, three chairmen, were mentioned, including Matthias Platzek (SPD) and Stanislaw Tillich (CDU) as representatives of two of the lignite countries, and the former Secretary of State for the Environment Ursula Heinen-Essen. Subsequently, however, there were personnel changes. Barbara Praetorius (HTW University of Applied Sciences) as well as Ewold Seeba, Vice-Chairman of the federal company for radioactive waste disposal, are now to join the Commission’s management. In addition to the Ministry of Economic Affairs and the Ministry of the Environment, the Ministries of Building (Interior) and Labour are now also involved (source: Montel).

However, the cabinet’s decision has now also failed in the second attempt. The scheduled date on Wednesday 30th of May 2018 did not take place as planned. According to the FAZ, there was “insufficient coordination in the government on detailed issues”.

The Commission’s final go-ahead will probably not be given until June 2018. We will keep you informed.

The 100-day law with changes in the KWKG and EEG should actually have been passed by a cabinet resolution on 9th of May. Especially with regard to the wind tenders and their conditions (keyword: privileged citizens’ energy companies) a quick decision was demanded. However, no decision has been reached until the end of May 2018 due to disputes between the coalition partners. For example, the SPD-led Ministry of the Environment still wants to bring the special tenders named in the coalition agreement into the law.

Decision making in the revision of the Nuclear Phase-out Act has progressed more quickly. The amendment to the law was approved by the cabinet on 23rd of May 2018. The law can be found on the website of the BMU and must now pass parliament. In particular, it concerns compensation for companies that made investments in their nuclear power plants during the period of lifetime extension from autumn 2010 to March 2011. It also relates to companies which have not been able to use their residual electricity volumes since the 2011 Nuclear Phase-out Act (source: Energate).

In December 2017, the Federal Constitutional Court awarded RWE and Vattenfall compensation. Eon is able to convert its residual electricity volumes into actual electricity from its nuclear power plants until the end of their lifetime. EnBW had not filed a suit and has sufficient quantities to operate its nuclear power plants until the end of the nuclear phase-out. The level of compensation is not yet clear. The legislator expects a total amount “in the upper three-digit million range”. However, the value of the residual electricity volumes will not be known until the end of December 2022, as it is based on the average day-ahead prices of Epex Spot between 6th of August 2011 and 31st of December 2022 (source: Montel).

The complete exemption of some large German power consumers from electricity grid charges for the years 2012 and 2013 has been assessed as illegal aid by the EU Competition Commission. This several years long process against § 19 section 2 of the StromNEV is thus closed. The Federal Ministry of Economics then announced that “the specific recovery burden and the number of companies affected cannot be quantified across the board” (source: BMWi). It is now up to the Federal Network Agency to calculate and reclaim the underpaid electricity grid charges. Estimates assume up to 300 million Euro (source: Top Agrar).

In the absence of competitors, all bidders in the second onshore wind auction in 2018 were awarded. Although, according to the Federal Network Agency, more than 1300 MW of capacity was permitted, only just over 600 MW of bids were received. The tender volume of 670 MW was even not completely filled for the first time, while the tender prices rose again and reached the level of the previous year (source: Federal Network Agency).

The wind industry is cautious due to the constantly changing tender design and has so far been holding back with more bids. Figure 1 shows the tender prices for onshore wind tenders. 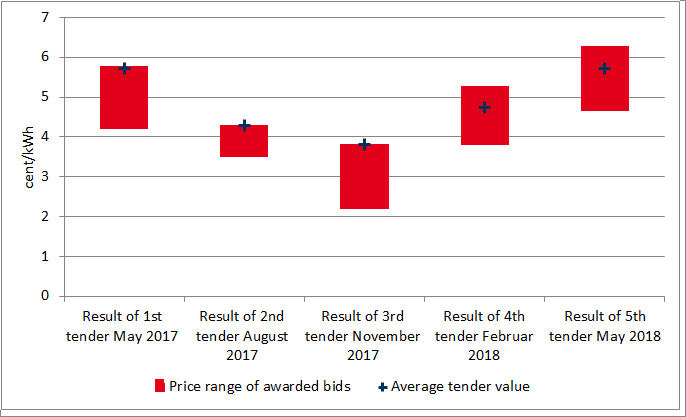 The next tender will take place on 1st of August 2018.

It seems that the Blockchain technology could have proved itself worthwhile especially in regional or local trading platforms. Both the Wuppertal municipal utilities and their “Tal.Markt” platform as well as Innogy and the start-up Conjoule with the “Community Network” use the new technology.

The main focus of the Wuppertal-based utility is on enabling the trade of green electricity. whereby customers can compile their electricity mix individually from renewable energy plants in the region. Even though the number of customers is only in the three-digit range, the picture is still positive. Furthermore, on the generation side both a hydropower plant, a wind power plant, five photovoltaic plants, two CHP plants and a waste incineration plant are now integrated (source: Energate).

“Community Networks”, on the other hand, is all about local trade between neighbours. In Mülheim, as well as in the Kettwig district of Essen, project participants with rooftop PV systems sell their electricity via the platform to a school, a supermarket and a waterworks. However, Innogy takes over the residual power supply in the background and also markets surplus electricity from the community (source: Energate).

Bullish mood in the commodity complex

Commodity prices are still on the rise. Whether oil, gas, coal or CO2, during May 2018 all of them saw an upward trend. In particular, the threat of US sanctions against Iran has raised the price of oil to over 80 USD/barrel for the first time since 2014. Voices in the market even spoke of a possible 100 USD/barrel. In this bullish market environment, many of the other commodity prices dragged along accordingly. Coal was also able to pull itself up to almost 90 EUR/ton, while gas was very solid at over 21 EUR/MWh. Towards the end of May, however, some commodities experienced a dip in prices. Figure 2 shows the development of oil, gas and coal prices with delivery in December 2018 during April and May 2018.

The prices of oil, gas and coal have risen by around 20 percent in the last two months.  CO2-certificates prices also rose sharply in May: from around EUR 13 per ton at the beginning of May to well over EUR 16 per tonne by the end of May. Since the beginning of the year, the price has already doubled.

The bullish mood on the futures markets is naturally also reflected in long-term electricity prices. Thus, the main futures contract for Germany (Baseload 2019) stood at more than 42 EUR/MWh on 30th of May 2018 and thus about 3 EUR/MWh higher than at the beginning of the month (see Figure 3). The contract reached a new 5-year high of over 43 EUR/MWh in the course of May 2018.

The month of May 2018 with its many holidays and lots of sunshine brought several negative prices on the spot market. On 1st of May, there were 18 uninterrupted hours with negative prices due to high wind input (up to 25 GW) and low demand. With a simultaneous high solar input of 20 GW, a maximum negative price of -58.96 EUR/MWh was reached in hour 14 to 15. There were also some negative prices around Pentecost holidays. A peak in renewable feed-in of more than 40 GW, with more than 28 GW solar brought down base price for Whit Monday to only 5.66 EUR/MWh. However, the prices never turned negative for more than five hours at a time and therefore, had no effect on the remuneration of renewable energies according to § 51 EEG.

Otherwise, hourly electricity prices on the day-ahead market were rather in the upper range for the month of May. The low wind input on a monthly basis in parts can be held responsible for this, among other things. In addition, EnBW’s Philippsburg 2 nuclear power plant (1400 MW) went out of operation on May 11th for its annual inspection. Figure 4 shows the generation of different technologies and the corresponding electricity prices in May 2018 for Germany in quarter-hourly resolution (data source: Entso-E).

Figure 4: Power generation and spot prices in Germany in May 2018, (Source: Energy Brainpool)

Electrolysis gases of renewable origin – on the way to competitiveness