Natural Gas is currently the third most important primary energy carrier in the world (after oil and coal). The main advantages of natural gas in comparison to coal or oil are the high efficiency levels that can be achieved when generating electricity from natural gas. As with oil, the global reserves of natural gas are concentrated in a few countries around the world.

Natural Gas is currently the third most important primary energy carrier in the world (after oil and coal). It consists mainly of methane (CH4) and is found partly in oil deposits in nature (so-called associated natural gas). However, there are also deposits, where there is no oil in the vicinity. All natural gas deposits are characterized by a gas-impermeable rock layer above the deposit. This prevents the natural gas from rising to the surface and in turn allowed the accumulation of natural gas at specific locations for millions of years.

The main advantages of natural gas in comparison to coal or oil are the high efficiency levels that can be achieved when generating electricity from natural gas. Furthermore, a relatively small amount of greenhouse gases and air pollutants are emitted during the combustion of natural gas due to its chemical composition. 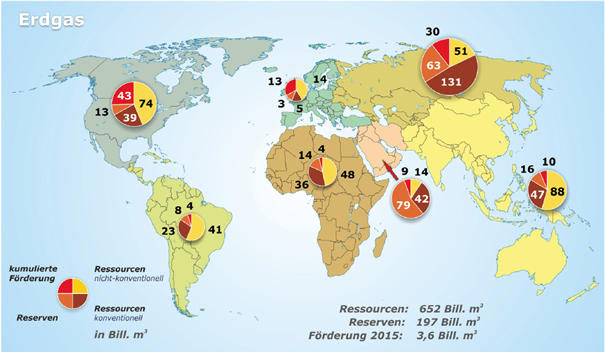 In the currently utilized natural gas deposits (“conventional natural gas”) natural gas is present in gaseous form, mainly in porous rock.  These deposits can be developed by drilling. After the natural gas layer has been reached, it flows to the surface by itself due to its low density and can be used there (e.g. the gas can be compressed and transported further).

The permeability of the porous rock determines how much natural gas can be taken from the deposit. The higher the permeability, the more gas can flow. If the deposit is exhausted the production can be sustained for a while by artificially creating a vacuum before the field is finally exhausted.

The most important European natural gas reserves are located in the Netherlands as well as in the North Sea (mainly in British and Norwegian territories). Next to the own production, natural gas is imported via pipelines from Russia, the Middle East as well as North African states. As the European reserves will be exhausted in the medium future and no large new findings are expected at this time, it can be assumed that the import dependency will increase in the coming years.

The world market for natural gas has been divided into four regional markets for a long time: the European, the North American, the South American and the Asian market (compare figure 2, source: BGR). There has been no uniform world market price for natural gas. The reason for this: natural gas (in contrast to coal and oil) has been a grid-bound energy carrier (and to a large extend still is). The regional character was also reflected by the high variances in prices for natural gas in the different regions. Especially in Japan the price for natural gas was significantly higher than in the rest of the world. As there were no technical opportunities of transporting the gas from one market to another, arbitrageurs were not able to effect a price adjustment. 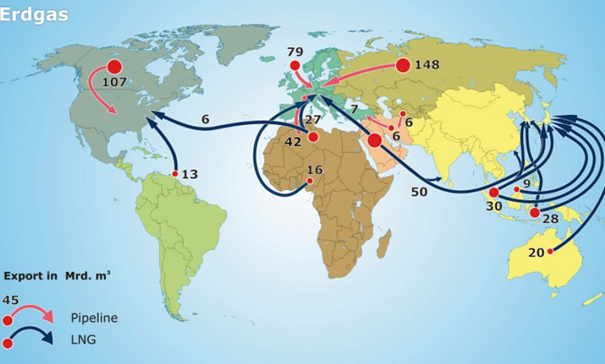 Due to the introduction of Liquefied Natural Gas (LNG) an exchange between the different natural gas markets is now possible. The international gas trade flows are shown in figure 3 (Source: BP). Obviously, Europe is largely dependent on Russian natural gas. 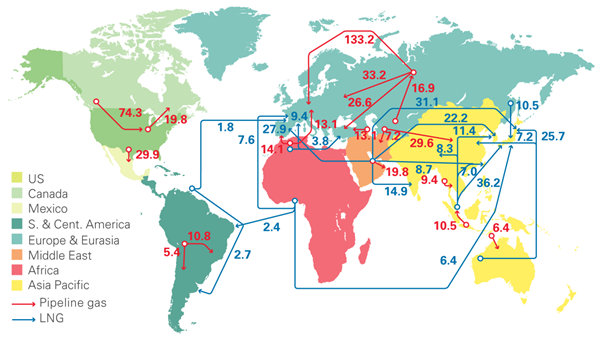 Figure 4 below depicts the current European pipeline network. The great fields in West Siberia are already several thousand kilometers away from the consumption centers in Western Europe. If they are exhausted the market has to rely on even more remote resources. To achieve (in the case of the importing European Union) a higher diversification or rather (in the case of Russia) to secure/develop new markets, new investments in new pipeline projects are planned. 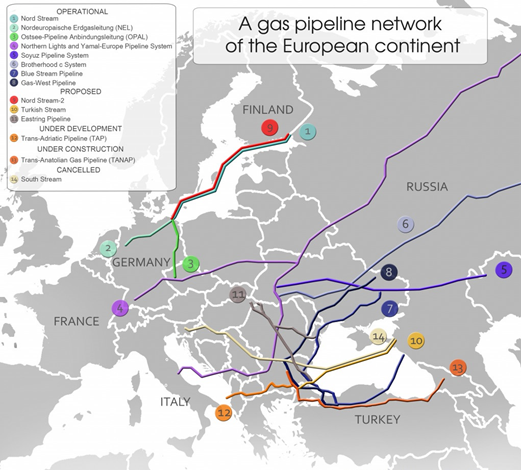 One has already been largely realized: Nord Stream 1, the pipeline runs through the Baltic Sea from Wyborn (Russia, neat to St. Petersburg) to Greifswald (Germany). The construction was primarily forced by Russia and serves the expansion of the transportation capacities to Western Europe. Moreover, Russia wanted to reduce its dependency on transit countries like Ukraine and Poland, which is reflected in the fact that the pipeline was not constructed onshore, but offshore. This on the other hand caused considerably higher construction costs. The discussion on appropriate transit costs for natural gas transported through transit countries to Western Europe has led to disputes, in particular between Russia and Ukraine.

The future position of producers in the Caspian region/Iran in the natural gas market is still uncertain for another reason: due to its geographical location Europe competes with China and India for natural gas from these producers. Because of the countries’ strong economic development a strong increase of natural gas demand is expected. Great potential consumption centers in India are partly located close to the pipelines to the producing countries. Transport to China would be via LNG.

In addition to conventional reserves, which have been subject of this article so far, there are unconventional natural gas resources as well. The most important unconventional resource is shale gas, which has gained in significance especially in the USA in recent years and pushed the price for natural gas worldwide down. However, the production of shale gas is related to greater environmental impacts than the production from conventional resources. In particular hydraulic fracturing (cracking the subsoil by pressing in water at extremely high pressure) as well as groundwater contamination led to a low acceptance of shale gas production in the German population.

Consequently, the use of this resource is currently not politically viable in Germany and cannot be foreseen. However, the situation is different in other European countries: The population density and the resistance in the population are significantly lower in Poland, where shale gas is to replace Russian gas imports. Therefore, the impact of shale gas on the European market will only be apparent in the coming years.

Purified biogas (so-called bio methane) has been fed into the natural gas grid in Germany for some years now. The treatment is necessary as biogas has a lower heating value than fossil natural gas (due to a CO2 share of 50 percent) and, moreover, consists of other chemical components (especially sulfur compounds) which could damage the transportation network. Nonetheless, the feed-in of biogas into the natural gas grid can be economically viable for the producers due to governmental incentives. Up to now biogas only plays a minor role on the natural gas market as the volumes which are fed in are low. In the future, however, the use will be political intended to limit the dependency on imports. The advantage of biogas as commodity is that the existing natural gas infrastructure can be used unconditionally.

In the medium-term there is also the possibility to import biogas from other countries to Germany, e.g. Ukraine has large agricultural areas. In a further development and cost reduction of the technology “bio natural gas” the existing long-distance pipeline network from Ukraine could be used to export bio natural gas to Western Europe. In particular if the transportation capacities are not fully utilized due to lower exports by Russia.

Trends in the development of electricity prices – EU Energy Outlook 2050