The first two weeks of June 2017 have produced a number of interesting outcomes and discussions, for instance a significant reduction of the average price in the PV tender or the back and forth in drawing up the tenant electricity law. On the futures market little change could be observed, while the spot market has been dominated by the influence of solar and wind.

On June 1st 2017 the decreasing costs of PV power plants became apparent in the second tender for PV power plants under the regime of German Renewable Energy Act 2017. This time the highest bid was below the lowest bid of the first tender in February, while the average fell to 5.66 cent/kWh and is, therefore, almost  1 cent/kWh lower than before. One reason for this was the extension to farmland and green areas in the southern federal states Bavaria and Baden-Wuerttemberg. Figure 1 shows the average surcharge value in all tenders for PV (including the cross-border tender of Germany and Denmark in November 2016) as well as for onshore wind in Germany since 2015. 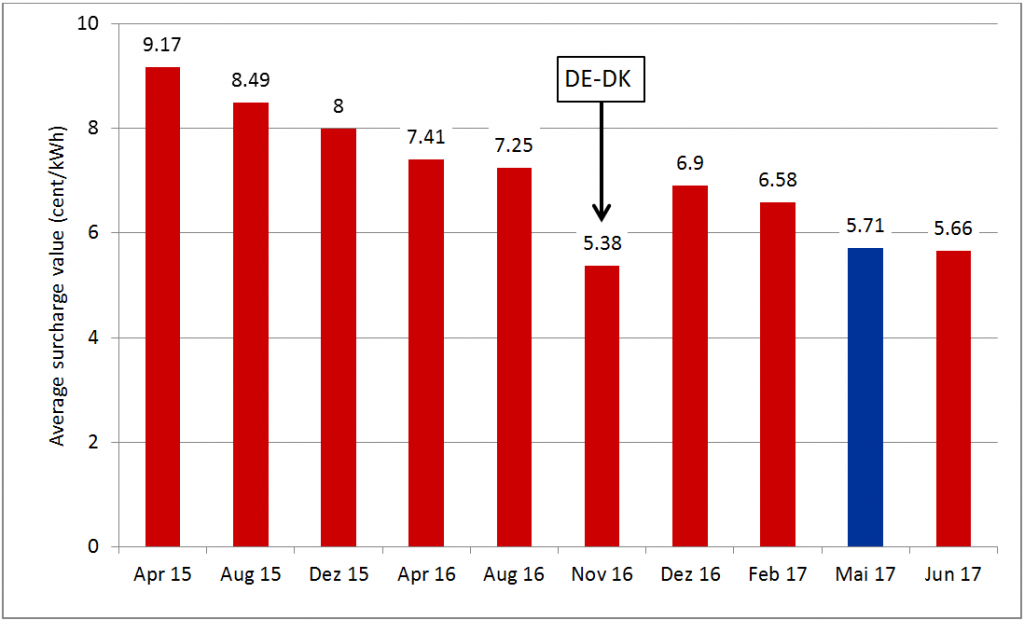 The requirements of the EU Commission are now implemented due to the passing of the amendment of the cross-border-renewable-energy-regulation (Novelle der Grenzüberschreitende-Erneuerbare-Energien-Verordnung – GEEV) by German Cabinet on June 14th. Thus cross-border tenders for wind energy are also possible now. Up to five percent of new renewable installations per year (a total of 300 MW for Germany) can be built in neighbour states and be supported by the German system at the same time.

Furthermore, Germany and Denmark agreed on strengthening the electricity trade between the states. The cross-border transmission lines are supposed to be extended, enabling minimum capacities of 400 MW until November 2017 over 700 MW in 2018 to 1,100 MW in 2020. The transmission grid operators TenneT and Energienet are responsible for the realisation of the project.

The government also agreed on a reform of the network charges. Within the next 4 years, until 1st of January 2022 the network charges for the transmission grids shall be equalized within Germany. Each year an equalization of 25 percent is being aimed for.

Moreover, the Federal Network Agency submitted an update of the guidelines of feed-in management on June 13th. Especially the assessment on the compensation payments for direct marketed plants was supplemented.

The price of the contract for baseload delivery for 2018 in Germany at the European Energy Exchange did not change drastically. During the entire June 2017 an up and down between just below 30.2 EUR/MWh and above 31 EUR/MWh could be observed (Figure 2, EEX).

On the spot market several days have been characterized by relatively simultaneous feed-in of wind and solar, thus delivering low power prices in the day-ahead auction. The peak price of 4th, 11th, 16th and 25th of June 2017 settled significantly below base price, as figure 3 (Source: EPEX Spot) depicts.

New study: Security of supply can be climate neutral and cost efficient during a cold dark doldrums