In order to limit price peaks in the balancing energy price, the Federal Network Agency introduced the mixed-price system in the balancing market. However, this procedure was not free of problems either.

In the second part of our series on the “The German electricity balancing market in transition” we discuss what problems arose during implementation and how the market behaved.

In October 2017, the high price peaks for balancing power  (please see blogpost part 1). After that the Federal Network Agency promised to examine the regulations for procurement, utilisation and pricing of the balancing market in detail.

The balancing energy prices on 17 October 2017 were more than 600 times higher than the average spot market prices of the same day.

For the time being, the authority decided to reduce the price ceiling of the bids to one tenth of the previous limit. From 2 January 2018, therefore, a maximum energy price of 9,999 EUR/MWh was allowed (source: Energie Chronik).

However, many market participants also saw this intervention as a violation of the energy-only market design. Normally, free pricing mechanisms should allow showing scarcity signals of resources and thus stimulate investment.

The limitation of the maximum prices, however, was only the beginning of a series of changes that still occupy the balancing market today.

An entirely new pricing mechanism for bids was given into the market consultation from February 2018: the mixed-price system (source: Federal Network Agency).

The mixed-price system: a new mechanism for balancing service pricing?

All in all, the new rules for the pricing mechanism for the balancing market should prevent very high energy prices from being called up. In other words, the capacity price should no longer be the only decisive factor for a bid to be accepted.

Consequently, the idea of the Federal Network Agency was to introduce a new value, which takes into account both the capacity price and the energy price. In this way, a pricing value is to be formed from the sum of the “capacity value” and the “energy value”.

The “capacity value” is the quotient of the capacity price and the corresponding product duration in hours (source: Energie Chronik).

Furthermore, the “energy value” consists of the energy price bid and a weighting factor, which is determined based on the activation probability of bids (source: Energate).

Market participants such as Next Kraftwerke, a direct marketer of renewable energies, have expressed serious concerns about the new mechanism (source: Next Kraftwerke). For example, a coupled pricing value would discriminate against certain generation technologies.

The costs for the provision of balancing services have fallen sharply in recent years, which figure 1 confirms. The new mixed-price system would however counter those cost reductions. 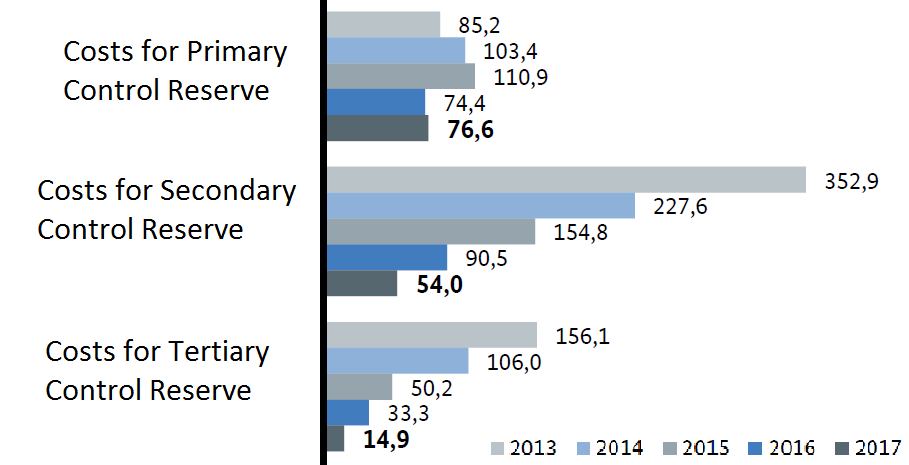 Compared to the system in place at that time, the new procedure would encourage higher capacity prices. The costs for the provision of capacity reserve services, i.e. the capacity prices, are apportioned via the electricity network charges to all electricity users.

The mixed-price system in reality

From 13 July 2018, however, the old tender rules were used again. The Düsseldorf Higher Regional Court suspended the mixed price procedure after only two days, at the request of Next Kraftwerke.

For the time being, the introduction of the new mixed-price system was postponed until 15 October 2018 in order to make it easier for companies to implement it.

After the new mixed-price system for awarding bids in the Secondary Control Reserve (SCR) and Tertiary Control Reserve (TCR) came into force in mid-October 2018, the bidding strategies of the participants in the balancing energy market changed considerably.

In the course of time, however, there have also been increasing signs that the new system enables high prices and profit margins. On various days in June 2019, the transmission system operators suddenly had to use much more reserve capacity than they had forecast.

In turn, the grid operators doubled the tender volume of the positive TCR to about 2000 MW. This in turn led suppliers with an existing power plant portfolio charging very high prices in the mixed-price tenders.

Another price spike occurred. This time, however, in the capacity price and not in the energy price.

The market participant in question was able to offer a capacity of 96 MW despite its extremely high price and earned around EUR 3.5 mil. within those four afternoon hours. A detailed description of the process can be found here.

Figure 2: comparison of the costs for SCR and TCR in the capacity control price and in the mixed-price system (source: Next Kraftwerke)

As a result, this can lead to very high and short-noticed balancing requirements and thus in turn to correspondingly high price peaks and profits through the power price (source: Energie Chronik).

The end of the mixed-price procedure

Approximately one year after the introduction of the mixed-price system, the Düsseldorf Higher Regional Court declared the system invalid on 22 July 2019. It thus followed Next Kraftwerke’s reasoning.

The Federal Network Agency declared that it was not considering any further legal steps and that the old system with separate capacity and energy prices would re-enter into force (source: Energie Chronik).

A market as fundamentally important for the electricity system as the balancing market must not become the object of speculation and profit maximisation by market participants.

This is why reliable, clear and rules, which are difficult to manipulate are so important.

However, preparations for the introduction of a new market design for the balancing market are already well underway. The Guideline on Electricity Balancing of the European Commission calls on national states to introduce balancing energy markets.

In the third and final part of our series on the German electricity balancing market, you can find out what these new market rules mean, when the new regulations come into force and what changes will take place.