As the transformation of the energy system to renewable energies, increased sector coupling and electrification progresses, grid infrastructures are also subject to change. The operators of electricity and gas networks must prepare themselves for this.

This analysis examines the current scenario frameworks for the German gas and electricity network development plans, especially with regard to green gases and power-to-gas.

How do electricity and gas network operators see the future development of the energy system? What changes will have the greatest impact from the point of view of infrastructure operators in this decade?

Besides that, are the networks and markets for gas and electricity growing closer together? These and other questions we will explore in this brief analysis.

Altogether, we use two main tools. The first one is  the scenario framework for the gas network development plan 2020-2030 published by the German gas transmission system operators (gas TSOs) in December 2019.

Secondly, the draft scenario framework for the electricity network development plan 2035 will be relevant that the transmission system operators (TSOs) published in January 2020 .

In particular, we will look at the connection of the two infrastructures with regard to green gas and power-to-gas.

First of all, the most important core information from the two framework documents for the Network Development Plans (NDP) of the German energy network infrastructures.

Projects on green gas and power-to-gas are part of the scenario framework for the first time and are a focal point, as are the conversion from L-gas to H-gas and the market area consolidation on 1 October 2021.

Various scenarios for the development (indexed) of the final gas energy consumption of Germany are shown in Figure 1.

Figure 1: development of German end energy consumption of gas in various scenarios up to the year 2050 (indexed) (source: FNB Gas)

The two scenarios of the scenario framework gas are based on dena-TM95 (Scenario I) and EUCO30 (Scenario II).

The FNB prefer Scenario I, which assumes a significant reduction of greenhouse gas emissions in Germany by 95 percent but also an increasing demand for gas by 2050.

In this scenario, the demand for gas increases from 968 TWh in 2017 to 1054 TWh in 2030, mainly due to higher gas consumption in the industrial sector, transport and non-energy consumption.

However, household gas demand will decline by 25 percent by 2030.

According to dena-TM95, about 60 percent of this gas demand would be covered by synthetic methane in 2050.

In a survey in mid-2019, the German gas TSOs classified and described green gas projects currently planned in Germany.

The production of and demand for green hydrogen, as well as the electrolysis capacity of these projects can be seen in Figure 2. 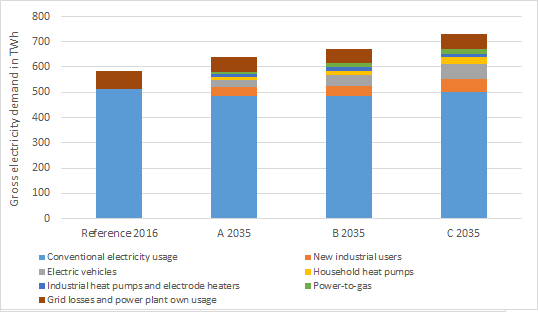 It follows from the projects planned so far that the demand for green hydrogen in 2030 will be about three times as high as the quantities produced in Germany, according to the FNB.

However, higher electrolysis capacities are included in the gas TSOs´ modelling. Namely an electric capacity of 1.5 GW in 2025 and 7.5 GW in 2030.

On 1 July 2020, the draft NDP Gas 2020-2030 will be published and will include an additional modelling variant for green gases.

At the end of January 2020, the gas TSOs also presented a vision for a Germany-wide hydrogen network. It is based on 90 percent on the existing natural gas network and features a total length of 5900 km (source: FNB Gas).

In mid-January 2020, the transmission system operators´ (TSOs) published the draft scenario framework for the NDP electricity 2035.

It takes into account the energy policy objectives of the German government, such as greenhouse gas neutrality by 2050 and the coal phase-out.

The draft envisages rising electricity consumption in all scenarios. This is due to increasing electrification in the heating and transport sectors and the industrial start-up of Power-to-X-technologies.

Figure 3 shows the different gross electricity demands by application, where the progressivity of the scenarios in terms of sector coupling and electrification increases from A to C.

Figure 3: gross electricity demand by application in the scenarios until 2035 in TWh

In order to achieve the target of 65 percent renewable energies in 2030 with rising electricity demand, the expansion of PV and wind will increase more than the political targets currently in place.

With the expansion figures for wind and solar assumed by the TSOs the share of renewables in gross electricity consumption reaches 73 to 77 percent in 2035.

According to the scenario framework, the TSOs also assume that the installed capacity of electrolysers will increase to 3, 5 or 8 GW by 2035, depending on the scenario.

Those numbers also take into account the green gas projects from the scenario framework gas 2020-2030.

Similarly, the resulting demand for electricity will also increase because of power-to-gas plants.

In scenario A this demand would amount to 9.3 TWh, in scenario B 16.3 TWh and in scenario C 20.8 TWh. This would correspond to more than a third of the additional demand for electricity from electric vehicles.

Power-to-Gas: infrastructures must be considered together

While the installed capacity of electrolysers in both reports increases to up to 8 GW in the next 10 to 15 years, these figures fall short of the target figures of studies on the German energy system transformation.

For example, these studies predict that up to 16 GW of electrical capacity will be installed by 2030, while electrolysers with a capacity of 40 to 254 GW will be needed in 2050 (source: FNB Gas).

In any case, the upcoming changes in the energy system make it necessary to link the two sectors of electricity and gas more closely.

As things stand at present, there will also be more demand for green hydrogen in Germany in the coming years than can be produced domestically.

This means that the import of green hydrogen must compensate for this difference. The German government’s National Hydrogen Strategy wants to consider this development (source: PV Magazine).

According to the National Hydrogen Strategy, the German government wants to support the construction and operation of electrolysers with a capacity of three to five GW (source: PV Magazine).

It is also clear to the grid operators that imports will have to cover a large part of the demand for green hydrogen (source: PV Magazine).

The linkages along the value chains of the gas and electricity markets are becoming more intensive. Gas is no longer just an input for gas-fired power plants.

But electricity from renewable energies could soon be stored in the form of synthetic gas and transported via the gas infrastructure.

Agile, Scrum, New Work II: What is a dynamic organisation?