The German Federal Court of Justice confirmed lower returns for grid operators, while renewable energies were on record course in the first half of 2019. Associations and politicians discuss the various possibilities for CO2 pricing. There was also a strong upward trend on the prices side in July 2019.

This means that the reductions of interest rates for investments by the Federal Network Agency in October 2016 are now a reality.

The lower equity interest rates will apply to the five-year duration of the third regulatory period for gas and electricity grids from 2018 and 2019, respectively.

In 2016, the Federal Network Agency had already justified the reduction with the low interest rates on the international and national financial markets that prevailed for years. Interest rates should fall from 9.05 percent to 6.91 percent for investments in new grid infrastructure and from 7.14 percent to 5.12 percent in old grid infrastructure. The reductions should relieve electricity customers of around EUR 2 billion in grid fees between 2019 and 2023.

Parts of the industry have criticised the reduction in the remuneration for grid operators from the outset and filed lawsuits against the reduction. Infrastructure investment should remain profitable. Especially against the background of the increased investment requirements resulting from the energy transition. In March 2018, the Düsseldorf Higher Regional Court also demanded an increase in interest rates (source: E&M).

For example, the latest and final ruling by the Federal Court of Justice is “incomprehensible” for the German Association of Energy and Water Industries, as the current interest rates for grid infrastructures in Germany are among the lowest in all of Europe (source: BDEW).

Other market participants have, however, welcomed the ruling with pleasure. Managing director of the Federal Consumer Association Müller: “With the electricity grid being a monopoly, it is unacceptable that fantastic returns are being be paid to the grid operators” (source: PV Magazine).

The half-year balance in the electricity sector is impressive. Wind energy was Germany’s strongest source of electricity during the first six months of 2019, producing 67.2 TWh before lignite at 53 TWh. 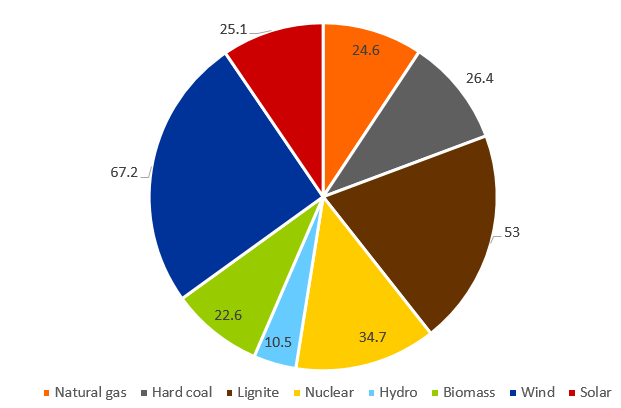 Figure 1: electricity generation of the various energy carrier in Germany in the first half of 2019 in TWh (source: Energy Brainpool)

In total, renewable energy sources accounted for 47 percent of net electricity generation, while their share in gross electricity consumption (including generation not going to the grid and internal power plant losses minus the export balance) stood at 44 percent (source: PV Magazine).

Along with the strong increase in renewable generation, there was a decline in electricity production from coal. Higher CO2-certificate prices and low gas prices in 2019 also led to a shift in generation to gas-fired power plants. The export surplus also fell by more than 11 percent to 20 TWh (source: Fraunhofer ISE). Figure 2 illustrates the percentage change in generation from the various energy sources compared to the same period in 2018.

Figure 2: relative change in electricity generation in first half of 2019 compared to 2018 in Germany (source: Energy Brainpool)

The collapse of hard coal and lignite power generation also had an impact on German CO2-emissions in the first half of 2019, with emissions from power generation falling by 15 percent from 136 to 116 million metric tons. Another reason, however, was the mild winter in February and March, when temperatures were 3.5 and 6.6 degrees Celsius above normal (source: Montel).

On 20th of September 2019, the Federal Government intends to present a comprehensive package for climate protection. Among other things, the package is to regulate how and to what extent CO2-emissions outside the European Emissions Trading System (ETS) are to be priced.

At the beginning of July, the Federal Ministry for the Environment therefore published various reports (DIW, IMK, FÖS) to determine the effects of CO2-pricing in the heat and transport sectors on CO2-emissions. In addition, the various pricing mechanisms were examined for their social compatibility.

The German Council of Economic Experts was also commissioned by the Federal Government to prepare an expert opinion which identifies reform options for Germany’s climate policy (source: German Council of Economic Experts). According to the report, the prevailing small-scale and scattered climate policy should be reoriented and while establishing a CO2-price as a central instrument.

There now also seems to be consensus within the Federal Government that there will be a CO2-price (source: PV Magazine). Accordingly, the Climate Cabinet meeting on 18th of July 2019 also discussed the available options for a new climate policy.

However, no decisions were taken and the involved ministries, i.e. Ministries for the environment, construction, agriculture, transport, economy and finance will still have a lot of work to do until 20th of September 2019 (source: PV Magazine).

With high CO2 certificate prices reaching an 11-year high just below the psychologically important limit of 30 EUR/tonne, the German front year electricity also increased to 52 EUR/MWh. A low auction volume on the market for CO2-certificates at the beginning of July caused prices to rise from EUR 26 per tonne to up to EUR 29.88 per tonne during intraday trading (source: Montel).

In July 2019, however, coal and gas prices also recovered from their yearly and monthly lows, driving up the annual electricity baseload price for 2020 (source: Montel). Figure 3 shows the price changes for the front year of electricity 2020 baseload, the CO2– certificates, as well as for coal and gas prices during June and July 2019. Whereas the stagnation or even recession in prices from mid of July can also be discerned.

On the short-term market, the average price of just under 40 EUR/MWh. This was higher than the average day-ahead price in June. As shown in figure 4, gas-fired generation in July 2019 was significantly higher than hard coal-fired generation. German lignite-fired power plants generated more than 8 TWh of electricity in July 2019. This corresponds to an increase of about 1 TWh compared to the previous month.

Options for additional CO2-pricing in Germany: overview and analysis