For 2016 capacity additions for wind energy are projected to lie between 4.2 GW and 4.5 GW. Furthermore the most recent PV tender brought forward average remuneration rates of less than 7 cent/kWh.

According to the estimates of the professional association wind (FA Wind) the year 2016 will see some of the strongest capacity addition for wind energy in Germany. By September 2016 almost 1100 new wind turbines with a total generating capacity of 3070 MW have been connected to the grid. This corresponds to a 60 percent increase compared to the same time in 2015, as shown in figure 1. Additionally, the installation of wind turbines with more than 3600 MW of capacity have already been permitted, but not yet connected to the grid. In order to take advantage of the favorable remuneration conditions of the German Renewable Energy Act 2014 (EEG 2014) compared to the ones of the EEG 2017, the strong addition of capacity addition is not entirely surprising. Until the end of 2016, a total of 4200 to 4500 MW wind power capacity is about to be connected to the grid, FA Wind announced. 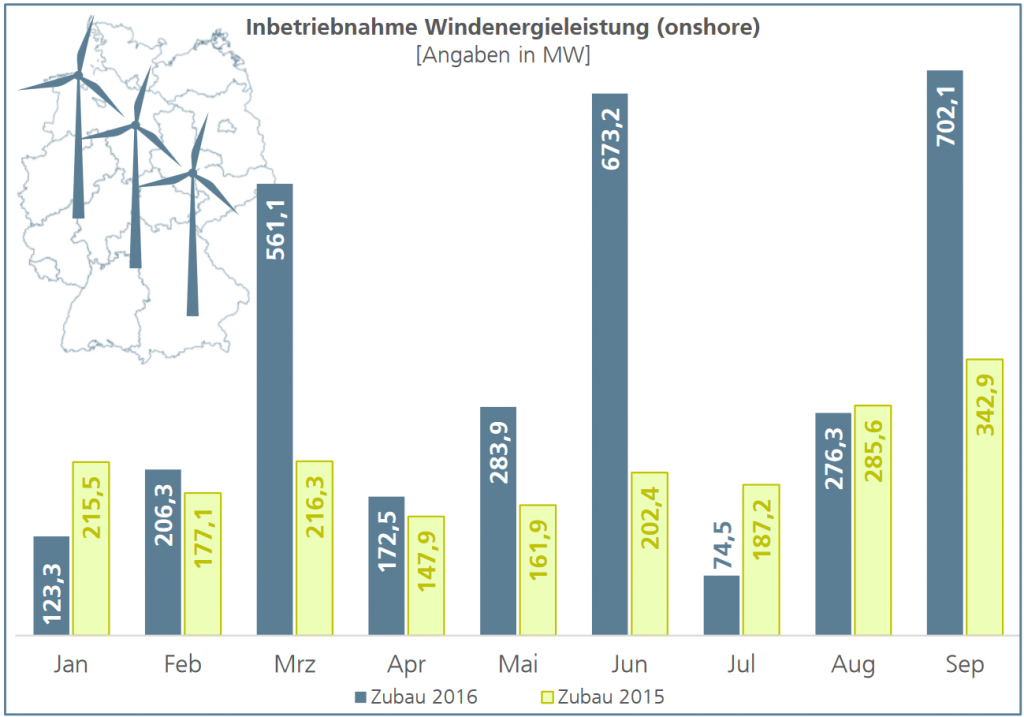 The actual capacity additions for wind energy have therefore already been above the political target of 2500 MW for four years, where this year might even top the current record year of 2014. From 2017 onwards, the new amendment of the EEG stipulates tenders of 2800 MW per year, thus greatly reducing the expansion of wind power from then on.

Also for PV, the newly installed capacity in October 2016 rose against the one from September. However, the expansion corridor of 2400 to 2600 MW set in the Renewable Energy Law will not be reached by a wide margin in 2016 (Source: Montel). The results of the sixth tender for green field PV projects from 1st December 2016 brought about more pleasant surprises. The German regulator Bundesnetzagentur published a report on the tender, where 163 MW of PV capacity has been awarded remuneration. In total projects with more than 420 MW have been placing bids in the tender, showing that more projects could be realized than being remunerated. The average remuneration rate of this tender has now been 6.9 cent/kWh. Figure 2 shows the volume-weighted averages of accepted bids in the last PV tenders. 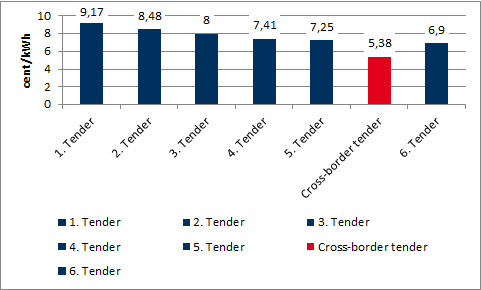 The remuneration rates that have been established via the tenders are thus way below the maximum permissible price for the tenders of 11.09 cent/kWh. In addition the current rates have been 0.35 cent/kWh lower than the one of the last PV tender in August 2016. The lowest bid in the pay-as-bid tender of December has been awarded with a remuneration of 6.26 cent/kWh, still about 1 cent/kWh higher than the ones resulting from the cross-border tender with Denmark. The next tender date for PV is the 1st of February 2017, with 200 MW of tendered capacity. From 2017 onwards also PV projects on buildings with a capacity of more than 750 kW have to place tenders and compete with other projects on their financial support.

Cross-border tender for PV comes with some surprises