Cross-border tender for PV comes with some surprises

Only projects in Denmark have been successful in bidding for the 50 MW of green field PV. And they did so by offering prices almost 2 cent/kWh lower than the ones in the last national tender in Germany. In the Danish cross-border tender, no German bid has been submitted however.

The German regulator, Bundesnetzagentur, published the analysis of the first cross-border tender for green field PV. The tendered volume amounted to only 50 MW, whereas in total 43 bids with a five-fold volume of 297 MW have been submitted. None of the 26 German projects with a total submitted volume of 143 MW have succeeded, while out of the 17 offers of Danish project developers with 154 MW only five have won in this round.

The winning bids of 50 MW have offered a price of 5.38 cent/kWh and thus almost 2 cent/kWh lower than the average price in the last German tendering round for green field PV in August 2016 (7.25 cent/kWh). The price difference can mainly be attributed to the fact that Danish projects are able to be built on agricultural land, whereas green field PV power plants on agricultural land in Germany are not eligible for receiving financial support via the renewable energy law (Source: PV Magazine). Figure 1 depicts the prices of the German tender rounds for PV, as well as the result of the first cross-border tender with Denmark. 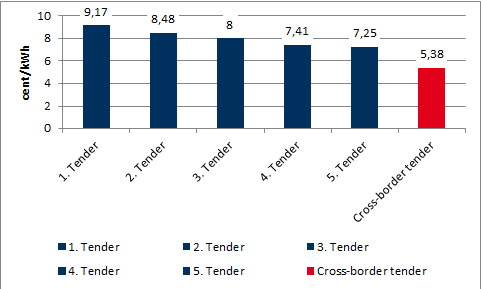 The German Renewable Energy Federation (BEE) and the German Solar Association criticized that fair competition has been stalled by the advantage of Danish projects in respect to the area selection criteria. Still, they also concluded on a positive note. According to the BEE, “the tendering price of 5.38 cent/kWh shows that the cost saving potential of cheap green field areas.”

The successful projects in Denmark will now be compensated via the German renewable energy law. However, German project developers could have submitted bids for German projects with a volume of 2.4 MW into the Danish PV tender with a total volume of 20 MW on 8th of December 2016, which would then be compensated via the Danish renewable energy support system. Apparently, no German projects handed in a bid for the Danish cross-border tender. The Danish Energy Agency stated, that that historically low prices have been achieved in the tender with a premium only 1.7 cent/kWh above power prices (Quelle: Danish Energy Agency).

During the permissibility check of the German Renewable Energy Law 2017, the European Commission demanded that five percent of the tender volume has to be open for neighboring EU-member states. The share of volume in cross-border tenders is bound to rise for Germany, as well as for other EU-states that have a support system for renewable energy in place. While the first cross-border auction should be regarded as a pilot, it still showed two things. Electricity from PV is further getting cheaper, where restrictions on land use and a beneficial taxation system (or the lack of those) play an ever important part for the price formation.