Majority of tendered ground-mounted PV-projects not finished yet 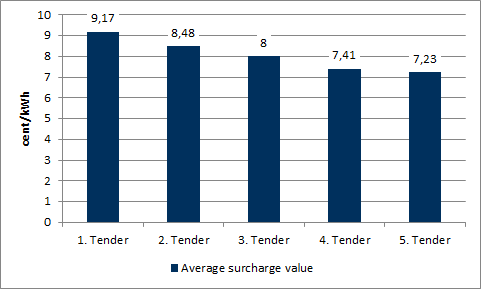 For the fifth round of public tenders the offers were between 6.8 and 10.98 Cent per kWh exhibiting a large difference between the highest and the lowest bid. In total 62 offers with a volume of 311 MW were handed in to the Federal Network Agency. But only 25 offers were successful in getting state support with a total capacity of 130.3 MW.

Even though the surcharge values are sinking from round to round the realization of ground-mounted PV projects is still lagging behind. From the projects which got state backing in the first and second round only 25 and 27 percent, respectively, have been built by the end of July 2016. Being successful in the public tender round, the developer has two years time to get the power stations onto the grid otherwise the right to get state support for the project vanishes. This means that the other three quarters of the accepted offers from the first two rounds, so in total PV capacity of 238 MW have to be built within the next 12 months in order to get the state backed remuneration for the electricity which is fed into the grid.

Observers see this critically and think that the expansion of PV power stations will not go as planned. What’s more: The bidder who offered 6.8 Cent per kWh from the fifth round of public tenders probably did not hand in the second financial safeguard payment. This means this project will not be eligible for state support anymore. The second financial safeguard is a payment which has to be made by a successful bidder within 10 days and constitutes a deposit to make sure the power station will be built. Of the 650 MW from the first four tender rounds around 100 MW has been constructed and is on the grid. Until the end of the deadline for the subsidy for the auctioned PV power plants (2 years after winning a bid), the Federal Network Agency expects a “run” to finish the projects.

Whether the expansion of renewable power plants is easier to plan with the public tender system than with a fixed and regularly shrinking feed-in tariff is still open to debate. What we know is that in the course of the public tender rounds ever lower averages of surcharge values have been established. Whether these projects will actually be built will show for itself in the next two years.