19. December 2016 / Simon Göß / Comments Off on Emission trading in Europe and China to be strengthened
CEENews: China, Energy Policy, Europe

In Europe, more emission allowances are to be taken out of the market in order to allow for higher CO2-prices. China opens its national emission trading market in 2017 thereby creating the world’s biggest carbon market.

The Committee on the Environment of the European Parliament tightens the reform suggestions of the EU commission for the European Emission Trading Scheme (ETS). With too many CO2-certificates in the ETS, the current prices for CO2 only amount to about 5 €/ton. In view of the climate agreement of Paris the reduction of much more CO2 has to take place, however the low prices for CO2 do not create enough financial incentives to reduce the emissions of CO2 in industrial processes or the generation of energy. Figure 1 shows the price development of CO2 emission allowances over the year 2016 with a total decline from 8.3 €/ton to just below 5 €/ton (Source: Montel, ICE).

The reform of the ETS for the period between 2021 and 2030 foresees the removal of more CO2-certificates than previously. Accordingly 0.8 to 1 billion emission allowances will be transferred into the so-called market stability reserve in order to create more scarcity and thus allow for increasing carbon prices. The amount to be placed into the market stability reserve is equivalent to roughly half a year of European industries’ CO2-emissions (Source: Montel).

In addition the EU-parliament suggests the introduction of a greater reduction factor of 2.4 % compared to the EU Commission’s factor of 2.2 %. The reduction factor determines the annual decrease of distributed CO2-allowances and could thus lead to a further reduction of about 4 million tons of CO2-emissions. However, industries exposed to international competition could be unburdened, as the respective industries are to receive 5 % more allowances for free. In total that would only lead to an increase of the share of emission allowances under the ETS that are distributed to the industry for free from 43 % to 48 %. Only the remainder will be tendered (Source: Montel).

According to the EU Parliament the shipping industry as well as aviation should also participate at the ETS in a closer way. All ships that tarnish at European harbors should be included in the ETS from 2021 onwards and the European aviation industry shall receive “only” 50 % instead of 85 % of its required emission allowances for free. The remaining half is then to be tendered as it is already for allowances for the industry (Source: Energate).

While the ETS is the largest emission trading market on the world since several years already (80 % of global CO2-trading), China currently prepares the ground to integrate its regional CO2-markets into a national emission trading system. This national CO2-market in China would have a volume of 3 to 5 billion allowances and thus shadow the ETS of the EU with 2 billion allowances. The National Development and Reform Committee (NDRC) of China announced that the first allocations of emission allowances are due for the first half of 2017. As things stand now only eight industries will have to take part in the new trading scheme, amongst others energy generation, aviation and the steel industry.

Companies that have an energy consumption of more than 10000 tons of standard coal equivalent have to take part in this new market. Up to now more than 7000 companies, covering roughly half of China’s CO2-emissions, have been identified. Zhaoli Jiang from NDRC’s climate change department estimates that the prices until 2020 will be around 30 Yuan/ton (4 €/ton), thus reaching the average price of the regional pilot markets. Figure 2 shows the price development of CO2-certificates at the different Chinese regional CO2 markets (Source: Tellhow). 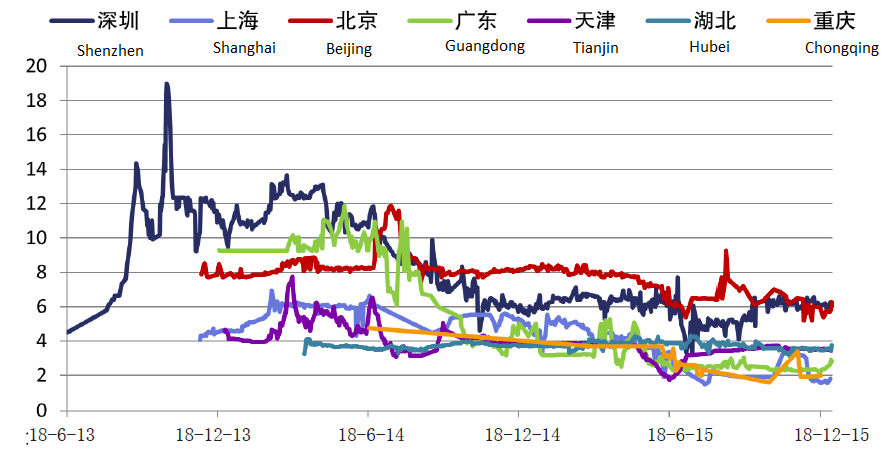 At the same time NDRC does not expect emission reduction to materialize until 2020 just because of the new CO2-trading scheme: “Companies won’t feel any real pressure to cut emissions until the carbon price hits 200-300 yuan (30-40 €/ton). This will not happen until after 2020.” From 2020 onwards new products such as carbon futures will be introduced, while the market will have grown to 60-400 billion Yuan (8.7 to 58 billion Euro). The roll-out of this trading scheme for the world’s largest carbon emitter is however still an important step for reducing emissions in China, which reaches its carbon emission peak by 2030.