The results of the first joint tenders for onshore wind energy and solar PV in Germany are available. PV received all tendered capacity, while wind energy was left empty-handed.

The background: The EEG (Renewable Energy Law) was amended in 2016. Since then, projects with a capacity of 750 kW or more are required to participate in tenders. The law also provides for “pilot” tenders. Accordingly, the market premium for this tender has been determined competitively in a joint tender.

Specifics: The Federal Network Agency has awarded 100 % of the contracts to PV projects. Bidders have been awarded 32 contracts. Wind onshore technology was not awarded a single contract. The volume-weighted bid value for onshore wind turbines was 7.23 ct/kWh. Figure 1 shows the results of tenders for PV and onshore wind in Germany since the beginning of 2017.

Worth mentioning: Enerparc received 12 of 32 awards. In addition, 2 of the “Big 4”-utilities can be found among the winners: EnBW was awarded contracts in Brandenburg, Bavaria and Baden-Württemberg. Vattenfall prevailed in Mecklenburg-Pomerania. Furthermore, the tender capacity of 200 MW was oversubscribed with 395 MW of bids submitted (Source: Federal Network Agency).

Some possible reasons for the one-sidedness of the awards: Solar systems are asserting themselves due to the highest cost reduction potentials. This was also demonstrated by the previous bidding rounds. 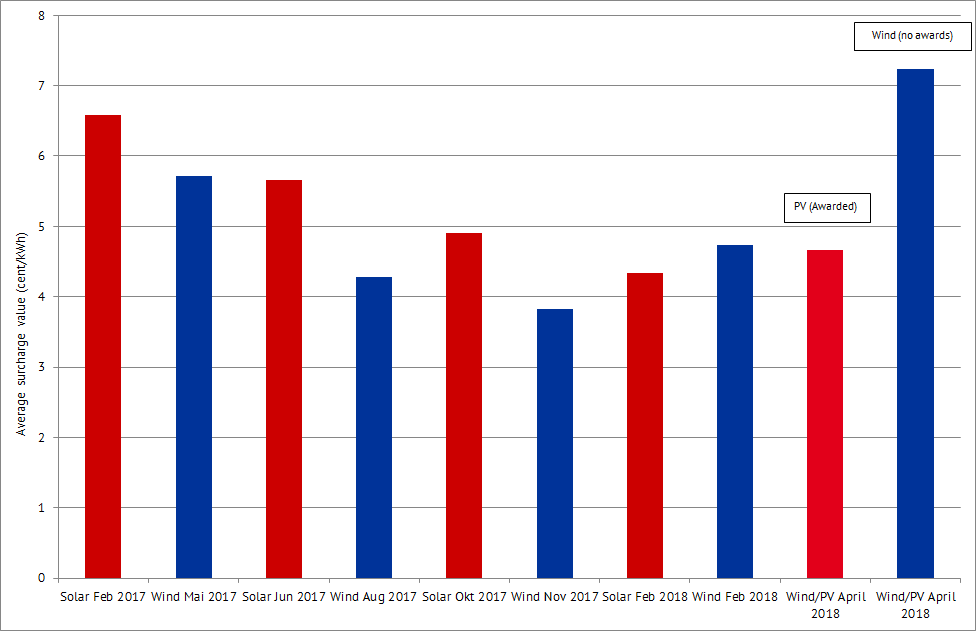 The amendment to the Renewable Energy Sources Act 2017 normally contains a compensation depending on the quality factor of the wind turbine site. Compensation for less profitable locations was not taken into account in this joint tender. Furthermore, the wind projects also had to present a permit according to the Federal Immission Control Act. These reasons can partly explain the high average bid value for wind.

New: The instrument of the so-called distribution grid expansion areas. Sites that already have many renewable energy plants are subject to a surcharge to their tender value. This reduces the chances of winning the contract and is intended to take into account an increased need to expand the distribution grid in these areas. According to the Federal Network Agency, however, this special regulation had no significant impact on successful bids.

The alternative: Further marketing opportunities for renewables already exist on the market. In addition to statutory remuneration and tenders, PPAs can be a solution. PPAs are long-term electricity supply contracts concluded bilaterally between electricity producers and consumers. Read our white paper for more information on this topic (in German).

The comments on the results of the joint tenders for wind and PV:

“Only bids for solar systems were accepted. In competition, the technology that can offer at the lowest cost prevails. However, the success of the energy transition requires a mix of different technologies.”

“We are happy for the many solar winners, but still consider the experiment of technology-neutral tenders a failure.

“Instead of technology-neutral procedures, the legislator should leave it to independent tender procedures with fair competitive conditions and thus ensure an optimal ratio of photovoltaic and wind energy for system integration. Even in the separate processes, both sectors were able to achieve clearly visible cost reductions on which we are continuing to work.”

The next call for tenders for onshore wind energy is 1st of May 2018; the next bidding date for solar systems is 1st of June 2018.

Revenue potential spot market for battery storage – What is important?