E.ON and RWE divide Innogy among themselves. How will the full integration of the RWE subsidiary into the two largest German energy companies change the energy market? According to a court ruling, the Federal Network Agency must increase the returns on equity investments in energy grids. And what about Blockchain two years after the hype about this new technology? Also in this monthly review: the development of electricity prices is largely dependent on rising CO2-prices.

Everything new at E.ON and RWE?

Splitting up Innogy can be regarded as a further step towards concentration in the energy industry. Even though things calmed down after the plans of Germany’s two largest energy companies have been reported on 10th of March 2018.  E.ON will take over the distribution grids and the retail part of RWE’s subsidiary Innogy. It was founded only just two years ago. E.ON ’s CEO Theyssen explained part of the merger with strong competition in the European energy markets. In addition, the classic integrated business model of an energy supplier has imploded. “We can no longer ignore the fact that power generation in large power plants and the sale of innovative customer solutions or the operation of intelligent networks are completely different business models,” he explained at the E.ON Group’s Innovation Days at the end of March (Source: Energate). RWE, on the other hand, will receive the renewable energy plants from Innogy and E.ON, thus pooling their generation capacities. Following the exchange of the various business areas, RWE will thus become the third largest renewable electricity producer in Europe, while E.ON, with around 50 million customers, will become one of Europe’s largest energy suppliers (Source: Handelsblatt).

German politicians have so far been positive about the developments and consider the competitiveness of the two companies in the European environment to be particularly important. The transaction must of course also be approved by the competition authorities. However, they currently do not see any serious reasons against the billion euro deal, which is expected to be completed by the end of next year (Source: Handelsblatt).

The state-regulated grid revenues as the main source of income for the owner of the majority of the German distribution grids, however, could cross-finance Eon’s sales and thus go against the basic idea of unbundling, managing director of the Federal Association of the New Energy Industry fears (Source: Energate). Whether the plan of the two groups to separate generation and grids, including retailing is paying off in the rapidly changing energy market is not yet clear. Especially, as digitalization progresses and the energy turnaround increasingly has to be thought between and across sectors.

The reaction from grid operators and the associations BDEW and VKU was positive. Especially with regard to investments for a decentralised energy transition, the distribution networks must be expanded (Source: VKU). “However, these investments will only be made if the equity interest rates are reasonable and investments can actually be earned back. This is exactly what the court confirmed today”, said the VKU. For energy customers, however, an increase in equity interest rates will also entail higher costs via increased network charges (Source: Energate).

Offshore in the Netherlands without state support

Following the 0 EUR bids for German offshore wind farms, the first offshore wind farm without financial support is now also being built in the neighbouring country. The offshore wind farm “Hollandse Kust Zuid” will be implemented without financial state support by Vattenfall, the Dutch Ministry of Economic Affairs announced. The bids were evaluated on the basis of a catalogue of different criteria. According to the tender rules, the bidding price had to be 0 ct/kWh. The wind farm is scheduled for completion in 2022 and is located 20 kilometers west of The Hague (Source: Erneuerbare Energien). With an output of 700 MW, the wind farm is expected to cover almost one-fifth of the envisioned 4,500 MW of offshore generation capacity in the Netherlands by 2023 (Source: Energate).

Blockchain: Between application and bubble?

After the launch of the “Allgäu Microgrid”, a Blockchain-based peer-to-peer trading platform, the Allgäuer Überlandwerke are now implementing a second pilot project with Blockchain technology. The participants in the project named “Pebbles” should also consist of prosumers. In addition to the predecessor project “Allgäu Microgrid”, research will now also be conducted to determine whether and how consumers and producers can use the network to provide grid system services (Source: Energyload).

Ponton, operator of the “Enerchain” trading platform, also continues to work with the project partners on the Blockchain technology in the energy market. With nearly 40 participating companies, Enerchain enables bilateral OTC transactions. Zimmermann, co-founder of Ponton, however, sees a danger in the crypto currency bubble. A bursting of this bubble would be helpful for a development boost for sensible Blockchain applications in the energy sector (Source: Energate).

The direct marketer E2M is also planning to set up a Blockchain platform. It will be developed together with the blockchain developer Swytch from the US. The goal of the platform is to assign a virtual value to the production volumes of renewable energies via the Swytch token. Thereby administrative costs for verifying and tracking renewable energy production volumes should be reduced (Source: E2M).

The Blockchain is not only a hype, but it enables companies to stay ahead in a digitized energy world and to have a say in how those changes play out in the energy industry. In addition, to understanding the Blockchain technology, it is particularly important here to be aware of the business models behind the Blockchain applications and to convert them one’s own business environment.

Prices for CO2-certificates have risen sharply since the beginning of 2018. As can be seen from Figure 1, an EUA (European Emission Allowance) with delivery in December 2018 stood at just under 8 EUR/ton on the ICE in London at the beginning of this year. During the first quarter of 2018, and particularly in March 2018, the price almost doubled to 14 EUR/ton. This makes it now more expensive to produce electricity for carbon-intensive power generators. From prices above 10 EUR/ton there is also an increased fuel switch, i.e. a shift in the order of the power plants in the merit order. Read more in our white paper on effective CO2– prices.

The reasons for the sharp price increase of EUAs are on the one hand the agreements reached within the EU for the next period of the European Emission Trading System (ETS). The upcoming regulations made will reduce the oversupply of CO2-certificates that currently exists and thus reduce the supply of pollution rights. This in turn increases the price. On the other hand, since the beginning of the year, speculative participants in the EUA market have often been referred to when explaining the increase of prices. These market participants would buy more certificates in the hope of profit-taking and thus drive demand and prices (Source: E&M). 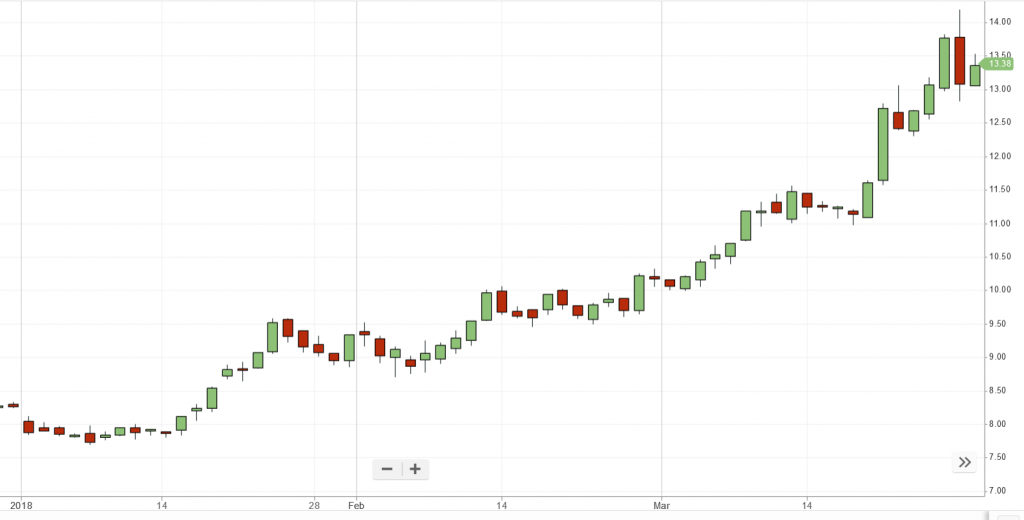 Figure 1: Price development for CO2-certificates for December 2018 from the beginning of 2018 to the end of March 2018 (Source: Montel)

In any case, rising CO2 prices increase the price for the generation of electricity from lignite and hard coal-fired power plants. This makes them less economical compared to less carbon-intensive producers such as gas-fired power plants. The price of electricity at the long end has also been boosted by CO2 prices along with higher coal prices and rose back to the level of the end of 2017, i.e. to over 37 EUR/MWh.

The spot market for electricity was dominated by the influence of wind energy, which also led to negative electricity prices (17th and 18th of March 2018) when wind generation was high. Figure 2 shows the power output of the various generating technologies for March 2018 in Germany. The day-ahead electricity price (red line) is depends mostly on the availability of wind and on high demand peaks in the evening hours, with prices of over 90 EUR/MWh occurring in a few hours (20th and 22nd of March 2018).