Blockchain – a technology that promises a democratic energy world without traditional retailers. It is not surprising that the energy industry has been dealing with blockchain technology since the beginning of the hype in 2016. In a changing energy world, the search for new business models is becoming increasingly important.

In contrast to conventional databases, the transaction data in a Blockchain is stored on distributed and thus decentralised computers. The result is a decentralised, publicly and distributed account book that is cryptographically secured.

Depending on the technical design, a Blockchain can be completely public or only open to a certain user group. A rough division can be made between public (Bitcoin, Ethereum), consortial (Energy Web Foundation) and private (IBM Hyperledger Fabric) Blockchains. Access to the current status of the data is possible at any time independently of an intermediary, i.e. a third party (e.g. banks, stock exchanges, trading platforms, etc.).

Transaction data is grouped into data blocks and sent to the distributed Blockchain network. A specific consensus algorithm validates the incoming data to ensure that all participants have the same level of information. As soon as the transaction data is attached to the Blockchain in a new block, it is confirmed and traceably stored.

“Smart contracts” can also automate the execution of transactions. “If-then-functions” cast in code enable processes and business models to be established virtually.

The Blockchain in the energy system of the future

The areas of application of the Blockchain in the energy industry can roughly be divided into two sub-areas: Process support by automation, as well as construction and operation of platforms (Source: Dena).

Especially in a more digitised energy world, Internet-of-Things devices will communicate and exchange data with a variety of other devices. For example, a mature Blockchain could replace a large number of communication interfaces. It could also simplify and make the charging processes of electric cars at external charging stations transparent. Figure 1 shows this example case.

Business models in the energy industry

For a holistic view of a new technology, it is particularly important to determine the possible business models for its use. This also applies to Blockchain applications. However, how exactly can business models be defined and elaborated on?

For a successful business model, it is very important to define the target group(s), together with an understanding of customer needs, to ultimately provide products and services that meet those needs. Furthermore, various studies show that business model innovations are mostly recombinations of existing models (Source: University of St. Gallen). In the energy industry, for example, peer-to-peer, two-sided market, white label, and solution provider are often recurring business models. They are also independent of the technology used to set up a specific business model. However, Blockchain technology can support the creation of business models in a digitized and more decentralized energy market.

The innovation of business models is not an art, but is based on science and practical experience. Blockchain technology can support business models, yet it will not be required for every application or will not be able to deliver its full potential in any given business case. Therefore, the decision tree shown in Figure 2 (according to ETH Zurich) can help as a rough orientation. 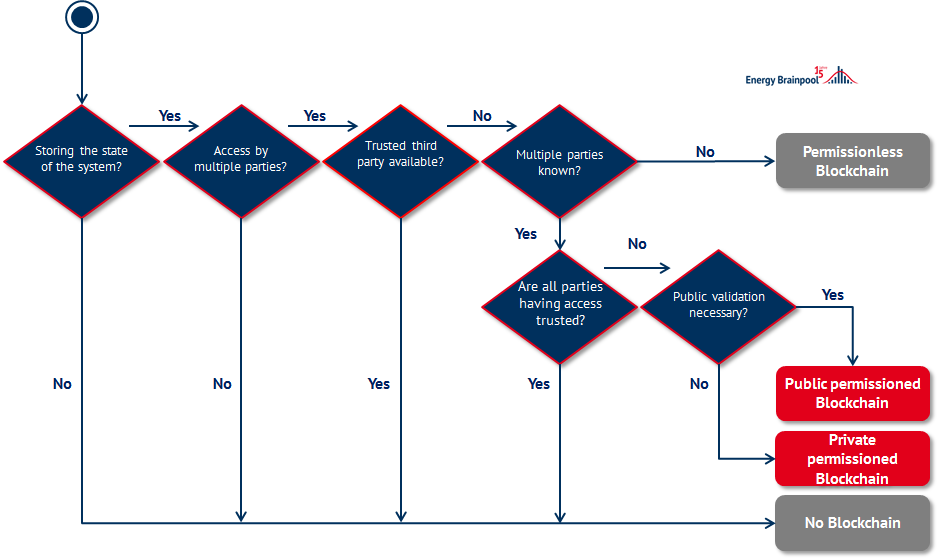 Nuclear power in Eastern Europe – how do controllable renewable alternatives look like?