Nuclear power in Eastern Europe – how do controllable renewable alternatives look like?

4. May 2018 / Fabian Huneke / Comments Off on Nuclear power in Eastern Europe – how do controllable renewable alternatives look like?
Study: Energy supply, Investment

New nuclear power plants with a total capacity of 15.6 GW are planned in Poland, Slovakia, the Czech Republic and Hungary (Visegrád Group “V4”). The purpose has been to ensure security of supply while remaining highly energy-independent from fossil imports. In a study commissioned by Greenpeace Energy eG, Energy Brainpool examines the energy economic perspective and comes to the following conclusion.

The subject of the study deals with the cost-optimised design of a system of controllable-renewable-energy power plants that have at least the same security of supply and energy independence. In order to meet the demand for electricity at all times, such a power plant system not only consists of wind and solar plants. It also comprises electrolysers (including methanisation) and gas power plants. In conjunction with a transnational solution as the Visegrád Group, the CRE power plant concept can in many cases provide electricity more cheaply than nuclear reactors from 2027.

But first things first: What does nuclear power plant electricity cost? How exactly does a CRE power plant system have to look like? On which factors does its costs depend on?

How high are the levelised costs of electricity generation of nuclear power plants really?

The total cost analysis of the study shows a range between 87 and 126 EUR2016/MWh of current European nuclear power projects. The actual value of Flamanville III is evaluated at 126 EUR2016/MWh and the state subsidy for Hinkley Point C at 119 EUR2016/MWh. According to plan and literature values, the costs are only 55 to 80 EUR2016/MWh.

Two components are fundamental to calculate the total cost per MWh generated from a nuclear power plant: On the one hand the capital costs (CAPEX) due to the high initial investment on the one hand (left in Figure 1) and the significantly lower operating and maintenance costs on the other. The range of capital costs shown is driven by the planned/actual CAPEX and the financing structure. The latter includes expected returns and risk premiums for construction and operation. With values between 38 and 100 EUR2016/MWh, this represents a wide range of fixed costs from the initial investment. It is explained by the range of WACCs[1] between 7 and 10 per cent on the one hand and the high divergence of investment costs in the literature and current planned and actual values of European nuclear power projects on the other hand.

What is the conclusion?

In other words: once built, the nuclear power plant is one of the most cost-effective generation technologies. However, the capital costs from the initial investment result in very high levelised costs of electricity generation. 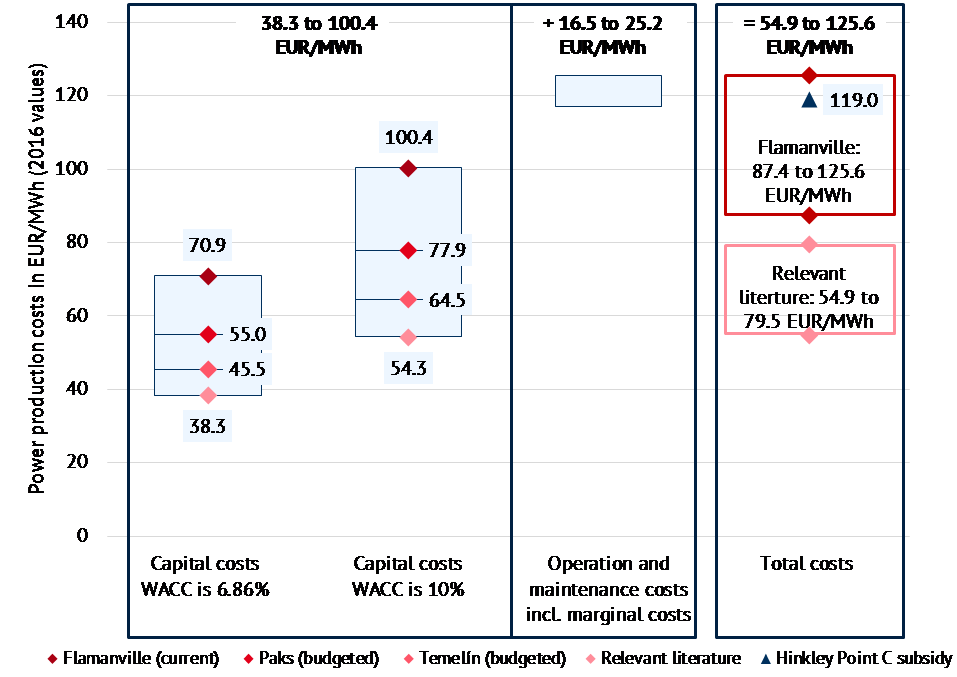 Figure 1: The range of cost components for nuclear power plants (NPPs) in current European NPP projects, derived from the relevant literaturebased on 6,500 hours of full load hours and a lifetime of 50 years (source: Energy Brainpool)

How does a controllable-renewable-energy power plant work and what does it cost?

An alternative for nuclear power projects in the V4 states is a controllable-renewable-energy power plant, which consists of variable renewable energy sources (vRES) such as wind and photovoltaics, on the one hand, and electrolysers with methanization and gas power plants for controllability, on the other. It produces electricity with the same security of supply, high energy independence and minimal impact on the climate. The surpluses from the production of vRES are used with the help of the electrolysis process and a subsequent enrichment of the separated hydrogen with carbon dioxide to produce synthetic gas. This is fed into the gas network or stored in gas storage facilities. If the direct use of vRES electricity cannot meet the demand for electricity, various gas-fired power plant technologies are available to provide the electricity according to demand.

So what are the total costs of the CRE power plant?

The costs are comparable to those of nuclear power plants – even with the currently expensive financing conditions for renewable energies and without a joint optimisation of the Visegrád states among themselves. In Poland, they are around 112 EUR/MWh, in the Czech Republic 119 EUR/MWh and in Hungary 129 EUR/MWh. In Slovakia, however, the potential is still unclear. As there is still little experience with wind power, initial analyses show high costs of 167 EUR/MWh due to poor wind conditions.

The average levelised costs of electricity generation for such a power plant system, which converts excess electricity into electrolysis gas distributed over the Visegrád states and distributes it on the balance sheet in the states via the European gas grid as required, are significantly lower. In this case, the costs are assumed to be 120 EUR/MWh in 2027 and 100 EUR/MWh in 2035 on the assumption of partially declining uniform financing conditions in the countries. 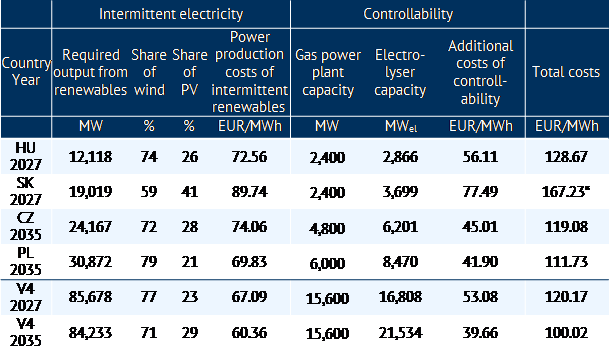 Table 2: Cost-optimised dimensioning of the CRE power plants in Visegrád countries for two selected years [Source: own calculation in April 2018] *) Due to very limited experience with wind power in Slovakia, actual wind potential has not been sufficiently studied and a very low level of potential has been assumed in these calculations.

Which factors determine the total costs of a CRE power plant?

In order to economically optimise a CRE power plant , the individual components must be dimensioned to improve the overall costs. The national wind and solar potential, but also the investment conditions and technical parameters influence this dimensioning.

What are the factors in detail?

The total costs in EUR/MWh of the CRE power plant consist of two parts: Firstly, the minimum levelised costs of electricity generation in EUR/MWh of the vRES are calculated by varying the ratio of installed PV and wind power. This is done taking into account the national hourly wind and solar potential as well as the respective technology costs. The study identifies a share of 70 to 80 per cent of wind onshore as optimal for overall costs. This is not due to particularly low wind power generation costs, because those of PV are about the same. In some cases, even PV is one step ahead. Rather, the mix of wind and PV leads to cost-optimised direct electricity consumption without the efficiency-reducing intermediate storage in electrolysis gas.

The levelised costs of electricity generation of the fluctuating electricity are between 73 and 90 EUR/MWh. For comparison: According to the current auction results, wind and PV electricity in Germany is subsidised with 40 to 50 EUR/MWh, i.e. significantly cheaper. This level of values is explained by the currently poor financing conditions in the V4 countries.

On the other hand, the additional costs for controllability in EUR/MWh are calculated by varying the optimum electrolyser capacity in MW and by determining a cost-optimal composition of the gas power plant capacity. These are strongly dependent on the determined cost degression of electrolysers and the efficiency rate assumed at 69 per cent including methanisation. In the study, the specific costs in EUR/MW per year are expected to be reduced by 55 per cent from 2027 to 2035.

What are concrete steps to implement the CRE power plant politically?

Successful implementation of the CRE power plant concept can be achieved by adapting the regulatory framework for the expansion of vRES and by continuous investment in electrolysis technology. The latter must be transferred step by step to industrial series production for the assumed cost degression and developed further technically. Up to now, the expansion of vRES in South-East Europe is not economical for project planners due to high capital costs. In an impulse paper, Agora Energiewende [2] proposes a concept based on contractual agreements between the EU Commission, member states and project planners in order to create planning security for investments in vRES. In addition, the EU Commission has announced that it will step up support for storage research [3], which includes the production of synthetic, regenerative gas by electrolysers.

Furthermore, the existing grid connection and the available area of nuclear power plant sites can be used for the expansion of vRES, the gas network should be maintained and, if necessary, modernised. An example of the continued use of existing grid connections is France, where a tender for 300 MW for PV will be launched at the Fessenheim nuclear power plant site by the end of 2018 [4].

In the study, Energy Brainpool calculated the levelised costs of electricity generation of the CRE power plant at 100 to 120 EUR/MWh for the Visegrád Group. This requires not only the harmonisation and improvement of investment conditions in the individual countries, but also a cooperative, coordinated expansion of the individual system components in the V4 group and a common internal market for gas.

[1] WACC (real) depict weighted interest rates, which are calculated from interest rates for debt, interest rates for equity depending on the expected return and the inflation rate. With their help, long-term investments with future cash flows are converted to annual values and thus become comparable.

Jamaica and the coal