On behalf of Greenpeace e.V., Energy Brainpool, outlined a coal phase-out in Germany with focus on achieving the climate goals and yet ensuring supply security. In order to reduce the transition costs it is necessary to drastically increase the implementation of cost-effective technologies on the market such as PV and wind. On the contrary, security of market supply needs to be ensured by building new gas power plants and installing cross-border capacities as well as flexibility options.

In the light of the Paris Agreement, Germany has declared to limit global warming to 2 degrees Celsius. This can only be achieved by increasing decarbonisation especially on the side of the energy sector. Greenpeace has commissioned Energy Brainpool to investigate the effects of a complete phase-out from coal production by 2030 concerning carbon dioxide emissions and the energy industry. Whether the climate goals are reachable can be measured by the carbon budget. It indicates how much climate-active gas can be emitted into the atmosphere whilst keeping up with the target value of 2 degrees Celsius.

If the carbon budget would be equally distributed among all sectors in Germany, the energy sector would have a carbon budget of 3.7 bn. t CO2. With today’s emission volumes this budget would be used up after only twelve years. The analysis concludes that emissions will amount to 1.22 bn. t CO2 from lignite and 1.16 bn. t CO2 from hard coal and other solid commodities from 2015 to 2030.

Key parameter of the model is an 80 per cent renewable energy share in gross electricity consumption – next to a phase-out from lignite and hard coal by 2030 and an increase in electricity consumption by sector coupling. To guarantee security of supply, new installations of gas-fired power plants are being assumed. The changes of the installed power plant capacities in the target system of 2022 and 2030 are outlined in the following table: 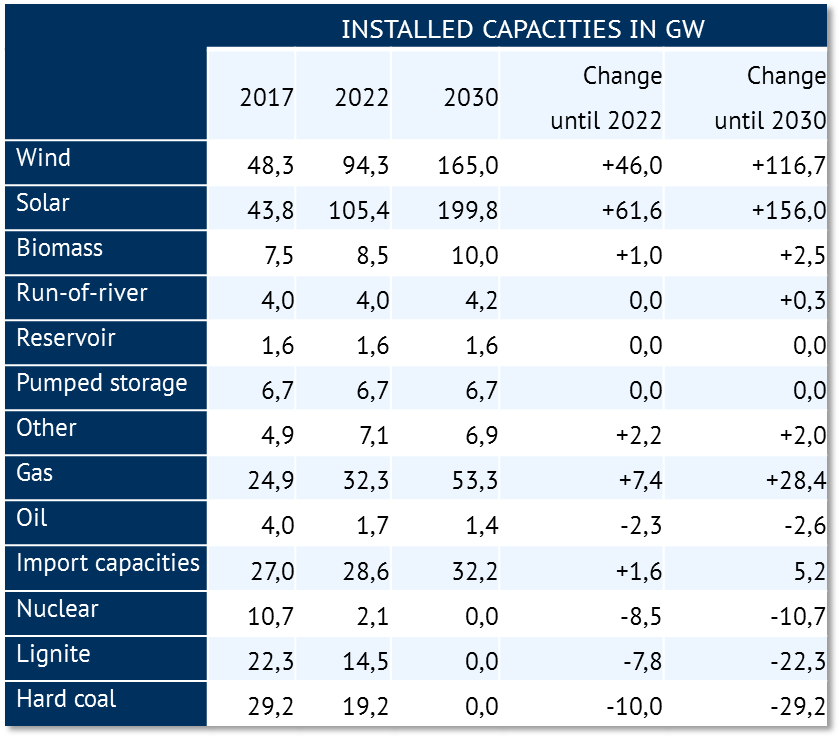 The selected phase-out path in the study was developed by means of a multi criteria approach with associated prerequisites. These include minimizing the overall emissions during the remaining operation times of the coal power plants (ecological merit order), taking planned decommissioning into account and not causing distortions in the electricity market due to larger capacity reductions in one year.

In the modelled transition of Germany’s power system, those coal and nuclear power plants, which have low to medium flexibility and low marginal costs, will leave the market. In times of low feed-in from wind and solar, gas-fired power plants and electricity imports take on the demand supply and thereby determine the market price. High feed-in from wind and solar results in a low production from gas power plants and electricity being exported.

This causes different effects in the price development with opposing influences. On the one hand the additional installation of wind and PV plummets prices; on the other hand demand is covered by more expensive production or imports in times of electricity shortages. This leads to an overall increase of the electricity prices to 54 EUR/MWh by 2030 (today’s level is 28 EUR/MWh), which is also linked to the price development for natural gas and EUA. However, a price increase to over 70 EUR/MWh by 2030 can also be expected in a business-as-usual scenario, whereby the climate goals would be missed by far. In the coal phase-out scenario, an extension of installed renewable energies causes a price-reducing effect which is accompanied by a slightly increasing EEG-apportionment (2030: 6.99 ct/kWh, 2017: 6.88 ct/kWh).

The electricity and the heat sector are connected through CHP plants. Therefore, a coal phase-out will impact the heating sector. Added installations of gas-fired power plants will also increase the share of gas-CHP. The caused reduction of heat production through the coal phase-out can be compensated to a significant extent by increasing efficiency in the final heat consumption. This is calculated to be 1.7 per cent p.a. in the national efficiency action plan to be extended until 2030. A full compensation through new gas plants is generally possible. Taking into account the conventional minimum generation, it does not make sense per se. In the study, technical alternatives were considered for Berlin and Hamburg as case examples for a conversion of the district.