On Monday, September 11th 2017 a high power generation from wind power plants hit low demand for electricity in Germany. Negative electricity prices occurred over a maximum period of five hours, so that the production was not affected by § 51 EEG 2017. Therefore, the number of negative prices rose to…

…59 for this year already. On Monday, September 11th 2017 the electricity prices for Germany at the day-ahead market of the EPEX Spot were below 0 EUR/MWh for four hours. The lowest price was -2.77 EUR/MWh (cf. figure 1).

The prices in France remained positive during this time, but also settled on a very low level.

The reduction of generation by nuclear power amounted to three gigawatts (minus 36 per cent compared to the maximum daily value). This corresponds to the capacity of three nuclear power plants. Pump storages used about 4 gigawatts of generation for storing electricity. There was no significant reduction of biomass plants (minus 2 per cent), run-of-river (minus 3 per cent) and waste energy (minus 3 per cent) according to the data of ENTSOE Transparency.

Figure 2 shows the generation and the demand on Sunday and Monday for Germany. 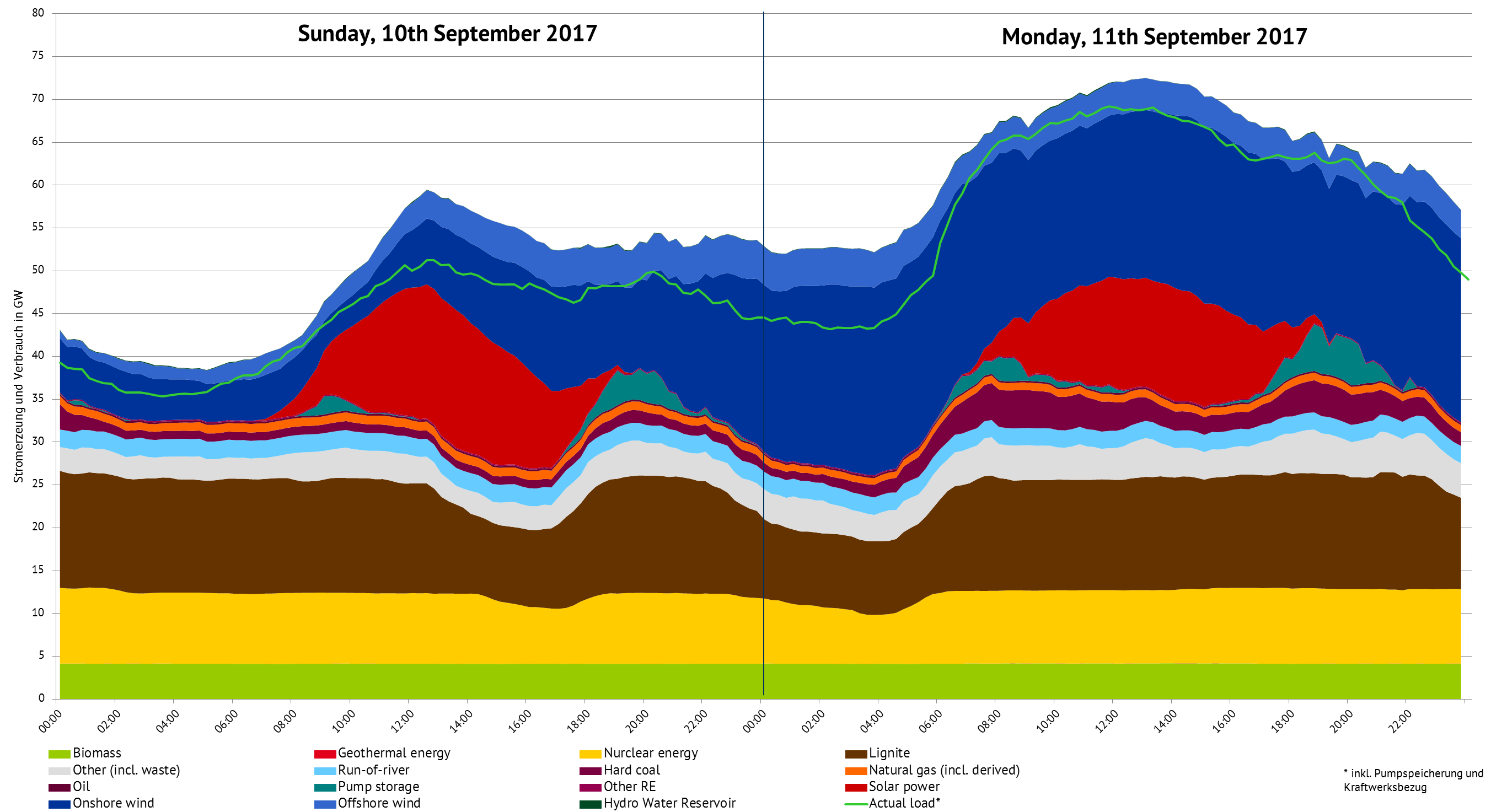 On Sunday afternoon, 10th of September, solar and wind power plants generated more than 27 gigawatts during their peak generation in the afternoon. Due to a higher demand compared to the night hours on Monday and the flexibility of conventional power plants, prices only fell to just under 10 EUR/MWh.

On both days, Germany continuously exported electricity. Up to 8 gigawatts could be distributed to other countries. Figure 3 shows the development of the net imports of Germany (negative values represent exports). Physical cross-border flows are actual electricity flows between countries, due to electricity generation and consumption of the European countries.

What are negative electrcity prices? EPEX SPOT defines them as follows: “Negative prices are a price signal on the power wholesale market that occurs when a high inflexible power generation meets low demand. Inflexible power sources can’t be shut down and restarted in a quick and cost-efficient manner. Renewables do count in, as they are dependent from external factors (wind, sun).”

Negative prices therefore are not caused by a surplus generation of renewable energies, but due to the lack of flexibility of nuclear power plants, lignite power plants and combined-heat and power plants (CHP-plants).

Generation, Demand and physical flows are based on real time values whereas the spot market prices in figure 1 are showing day-ahead values, based on forecasts. Because of balancing and intraday markets as well as unexpected developments, the power system data cannot be solely used to interpret and explain the day-ahead prices.

Generation data from ENTSO-E Transparency is not complete. Data for generation from hard coal and gas power stations is only covering a small part of the overall generation, compared to other available sources.

What is the minimum CO2-price in order to affect the merit-order?