The latest figures from the Federal Environment Agency make it official. Germany emitted 4.5 percent less CO2 last year. Emissions were thus just over 865 million tonnes. The energy sector and households accounted for the lion’s share of the decline. In this article you will find a summary of Germany’s CO2 balance for the year 2018.

The latest figures from the Federal Environment Agency make it official. Germany emitted 4.5 percent less CO2 last year. Emissions were thus just over 865 million tonnes. The energy sector and households accounted for the lion’s share of the decline. In this article you will find a summary of Germany’s CO2 balance for the year 2018.

The official estimates of Germany’s CO2-emissions have been published. According to the Federal Environment Agency (UBA), Germany emitted 4.5 percent less CO2 in 2018 than in 2017. This corresponds to a decrease of 41 million tonnes. Total emissions last year were 865.6 million tonnes. Figure 1 shows the emissions in the most important areas in a year-on-year comparison.

Figure 1: COs emissions in the most important areas of Germany in 2017 and 2018 (rounded), source: Energy Brainpool

It is clear that emissions fell by 25 million tons, primarily in the energy industry and in households. The transport sector, industry, agriculture and waste management, on the other hand, only saved eleven million tonnes. According to UBA, a further five million tonnes were saved in other combustion plants, i.e. mainly in gas boilers or drying plants.

How has the decline developed since 2014?

German emissions have not declined since 2014, but rather increased. However, the decline in 2018 was also marked by special effects. First of all, the warm year led to lower heat consumption and thus lower emissions. Besides that the rise in oil prices, especially until October 2018, could also have had a dampening effect on the transport sector´s consumption. The higher prices of CO2-certificates have made the production of electricity from hard coal more expensive.

As a result, less hard coal was burned and emissions from the generation of electricity from hard coal were reduced. In addition, hard coal capacities amounting to 1.5 GW were decommissioned. According to UBA, greenhouse gas emissions from hard coal fell by 13.4 million tonnes, or 10.8 percent, in 2018 compared with 2017. Emissions from lignite use also fell in 2018. The transfer of power plant units in Niederaußem and Jänschwalde from the electricity market to security reserve for emergencies was responsible for a reduction of 3.6 million tonnes of CO2. Figure 2 shows the reduction in CO2-emissions according to the most important emission sources and illustrates the above figures (source: UBA).

Compared to 1990, Germany has reduced its emissions by 30.6 percent. However, the target of reducing CO2-emissions by 40 percent by 2020 was dropped last year. All political efforts are now set for the year 2030. By then, greenhouse gas emissions should have fallen by as much as 55 percent compared with 1990 levels. Figure 2 clearly shows that phasing out coal-fired power generation can make a major contribution to Germany’s climate targets. However, a strong reduction in oil and gas consumption is also needed.

Up to the middle of the century, emissions will have to fall many times over in order to achieve close to greenhouse gas neutrality. Figure 3 (Source: UBA) illustrates this using the emission targets of the various sectors from the Climate Protection Plan 2050. 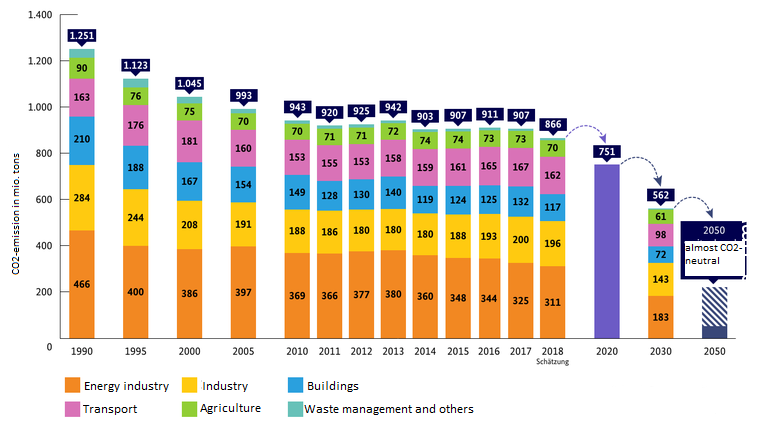 Figure 3: development of greenhouse gas emissions in Germany according to sectors of the climate protection plan, source: UBA

According to UBA, emissions from the transport sector are to be reduced by 64 million tons by 2030. This corresponds to around 6 million tonnes per year from 2020 and an unprecedented reduction in this sector.

The sector targets were and are a major point of contention within the Grand Coalition. The Federal Ministry of Transport in particular is not very keen on sectoral and strong CO2 targets. Not surprisingly, government spokesman Seibert commented after the first meeting: “It had become clear that there is urgent need for action in climate protection” (source: PV Magazine). The expectations for results of the climate cabinet are high. For without tight targets and increased efforts to reduce emissions, the target for 2030 cannot be achieved either.