Most of the regulations of the German Climate Package 2030 gradually went into the parliamentary implementation phase during October 2019. For 2020, the renewable energy levy will rise by about 5 percent. The Federal Network Agency announced the results of the October 2019 tenders for onshore wind and PV. Prices struggle to find a direction amidst uncertain political and economic developments.

Weakened climate package on the way to be implemented

The governing parties have further weakened the already disappointing climate programme for 2030, but are likely to remain on schedule. Thus the goal of German greenhouse gas neutrality by 2050 is now no longer to be achieved, but rather only “pursued”. The control mechanisms for compliance with the climate targets have also been weakened. Moreover, the idea of having proposals by an independent climate council for achieving climate targets in the individual sectors are no longer part of the programme. Similarly, binding targets for the reduction of greenhouse gas emissions in 2040 have also been erased (source: Erneuerbare Energien).

Concerning the expansion of renewables by 2030, wind energy capacity should only reach 67 to 71 GW. This means a net increase of about 15 GW compared to today, i.e. an annual increase of significantly less than 2 GW (source: Erneuerbare Energien). The installed PV capacity on the other hand is to almost double to 98 GW by 2030 compared to today (source: PV Magazine). By 2030, wind energy is expected to generate 145 TWh, PV around 90 TWh. With an electricity consumption of around 600 TWh, this would correspond to a share of wind and PV of just under 40 percent.

On 16 October 2019, the Federal Cabinet approved some parts of the climate package. These included tax cuts for train tickets and tax increases for airline tickets. In addition, the pricing of fossil fuels in the transport and building sectors was approved by the Federal Cabinet on 23 October. By the end of the year, the most important points of the climate package should have been decided on, so that they can enter into force at the beginning of 2020 (source: Montel).

While the financial support of PV systems is responsible for about 2.5 ct/kWh for 2020, onshore wind and offshore wind together amount to 2.6 ct/kWh. Figure 1 shows the composition of the renewable energy levy for 2020. 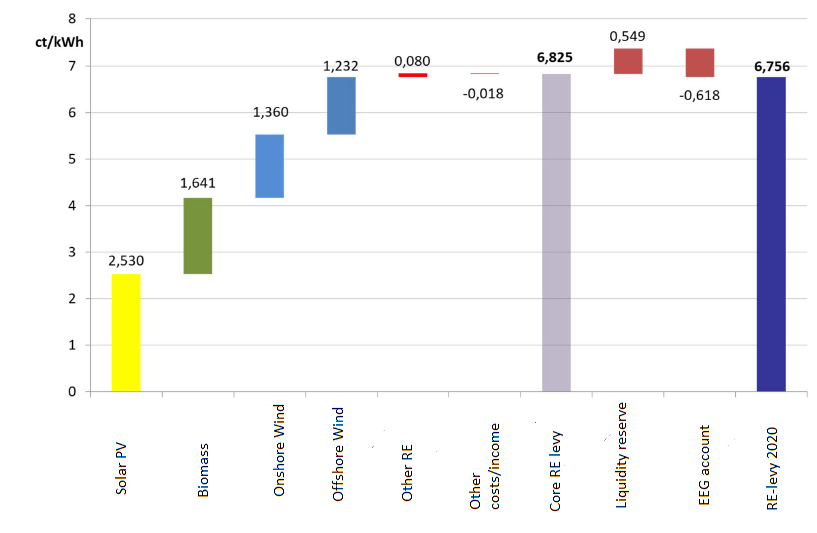 Figure 1: composition of the renewable energy levy for 2020 (source: Netztransparenz)

Tenders: No news for wind power, decreased values for PV

There were no surprises in the tender for onshore wind on 1 October 2019. Since the tender of August 2019 and thus for the third time in a row, the average tender value has been at the permitted maximum of 6.2 ct/kWh. Out of the 650 MW capacity that was tendered only 204 MW have been given permission. The tender was undersubscribed by more two-thirds due to low participation. In conclusion, the shortfall in the interest for the tenders for onshore wind has therefore been going on for exactly one year (source: Bundesnetzagentur).

By contrast, the tender values for PV have fallen again. The Federal Network Agency announced that the average price had dropped to 4.9 ct/kWh. In the tender of June 2019 this value still stood at 5.47 ct/kWh, however in February 2019 it was already at a similar level: 4.8 ct/kWh. The decisive factor for the decline of just under 0.6 ct/kWh was the greater availability of land. Bavaria decided in June 2019 to allow more disadvantaged arable land for solar PV tenders. The potential areas in the southern German federal state thus rose from 30 to 70. This in turn affected the number of bids and thus the price level (source: Erneuerbare Energien). Almost 650 MW of bids competed for 150 MW of tendered capacity. Figure 2 shows the average bidding values for onshore wind and PV in Germany in 2019. 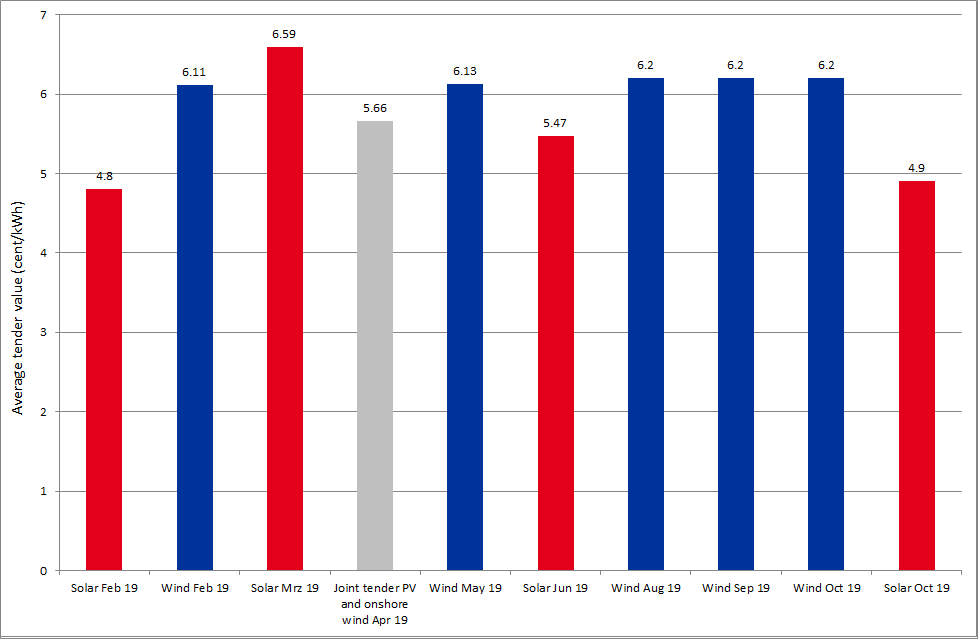 In December, a further 500 MW of each solar and onshore wind power are being auctioned. In addition, joint tender for wind and solar will take place in November. However PV cleared the entire available capacity in the last three of those technology-neutral tenders.

The so-called innovation tenders have been delayed due to political issues, so that the first tender of this kind will probably not take place until 2020. At least the cabinet has passed the relevant ordinance. In the innovation tenders bids made up of combinations of PV, wind, storage or biomass can compete with each other. However, one of the generating technologies in the combinations must be PV or onshore wind. The maximum value is set at 7.5 ct/kWh and a fixed market premium will be paid to the successful plant operator. In the case of negative electricity prices, renewable energy generators will not receive payments (source: PV Magazine).

Electricity prices still do not know where to go

In October 2019, trading of the German baseload electricity future for 2020 was rather unspectacular. It remained within the price corridor of 46-49 EUR/MWh and mainly followed CO2 prices. The latter prices also only ranged from just under 23 EUR/ton to around 26.5 EUR/ton. Above all, the uncertainty about the further course of Brexit, as well as the global economic conditions give little cause for rising prices on the long-term markets. Since August 2019, the German electricity baseload contract for 2020 lost 3 to 4 EUR/MWh, while prices for CO2 certificates fell from 30 EUR/ton to about 25 EUR/ton. The relative price changes from August to end of October of the baseload future 2020 for the German market area, as well as of CO2-certificates with expiry date December 2020, can be seen in Figure 3 (source: Montel).

At the short end of the electricity market, solar feed-in fell by about 40 per cent compared to September 2019. In contrast, wind energy contributed 12 TWh and thus the majority of the renewable feed-in. Gas and coal generation grew by about 2 TWh compared to the previous month. Figure 4 shows the generation of the various technologies and the day-ahead electricity prices for Germany in October 2019.

About the chaotic legal framework for coal-fired power plants